A lost love, an international escape and an intentional friendship 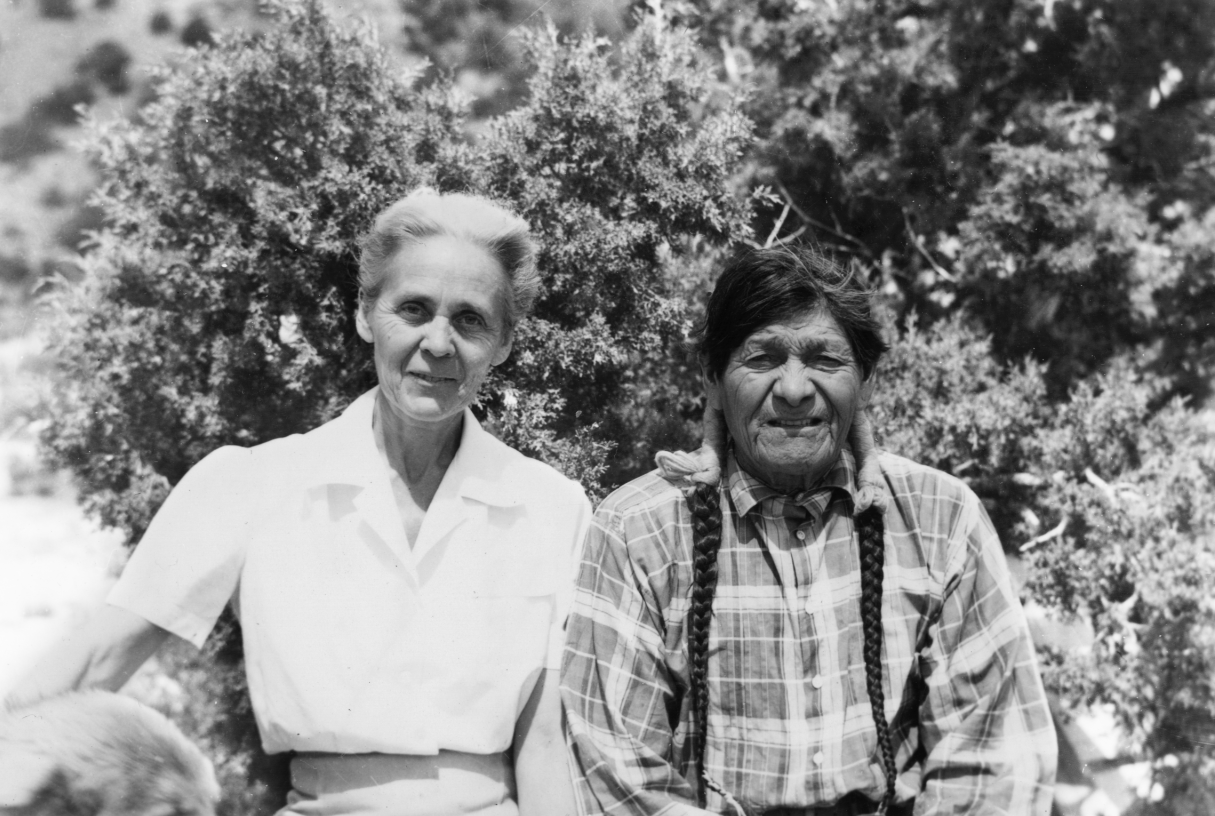 This Valentine’s Day, discover several remarkable relationships that occurred leading up to and during the Manhattan Project.

During the Manhattan Project, Edith Warner ran a tearoom open only to laboratory staff — but she didn’t do it alone. Warner baked cakes and served scientists while Tilano Montoya gathered well water and kept the wood stove fed. Their regulars included the likes of Manhattan Project Director J. Robert Oppenheimer and physicists Niels Bohr and Enrico Fermi.

When they met and became roommates around 1928, Warner was in her mid-30s, unmarried and the freight agent for the Los Alamos Ranch School. For $25 a month, Warner secured railroad shipments for the school at the Otowi Crossing stop. The tearoom was her side business, until Manhattan Project staff made it her mainstay. Montoya, who was 20 years older than Warner, was a carpenter and former governor of the nearby Pueblo de San Ildefonso.

Together they ran the tearoom through 1946, though many of their most famous diners had left Los Alamos by the time WWII ended in September 1945.

Warner and Montoya never publicly shared if theirs was a platonic or romantic partnership. What is certain is that they spent decades together at their house at Otowi Crossing. In 1951, Warner died of cancer. Before she left the world, she mail-ordered two years’ worth of blue jeans from Montgomery Ward for Tilano. He passed away almost exactly two years later.

According to historical accounts, famed physicist Enrico Fermi told a friend in 1927 that he “felt like doing something out of the ordinary, something definitely extravagant: either to buy a car or to take a wife." To the disappointment of his then-girlfriend Laura Capon, Enrico bought a yellow Peugeot Bébé. But her worry was for naught, as he soon proposed.

For 10 years, the Fermis lived in Rome and had two children. Enrico was a professor of theoretical physics at the University of Rome, where he conducted the experiments that led to his 1938 Nobel Prize in Physics — an award that ultimately helped him find work at New York's Columbia University and relocate his Jewish wife and children just as Nazi-allied Italy passed its first antisemitic laws.

By 1942, Enrico supervised the first self-sustaining nuclear reaction (Chicago Pile-1) at the University of Chicago Met Lab — a precursor to the development of the atomic bombs in Los Alamos. In 1944, Oppenheimer recruited Enrico as an associate director in the Manhattan Project and Laura as an assistant in the project's Health Group.

As soon as Enrico was allowed to share his work at Los Alamos with Laura, he did. Shortly after WWII ended, he handed her a mimeographed book and said, “It may interest you to see the Smyth Report. It contains all declassified information on atomic energy. It was just released for publication, and this is an advance copy.”

Before Richard Feynman was the bongo-playing Nobel Prize-winning theoretical physicist who wrote memoirs that helped popularize science in the 20th century, he was a 15-year-old kid from Far Rockaway, New York, who fell in love with a girl named Arline Greenbaum. They dated from high school through his doctoral program at Princeton University.

During their courtship, Arline was constantly sick. Doctors finally identified her frequent lumps, fevers and fatigue as tuberculosis. Though their families didn’t approve, Feynman and Greenbaum got married on June 29, 1942, in a Staten Island city office. Fearing infection, Feynman kissed Arline on the cheek.

There was no honeymoon — there was work to do. Richard was recruited to the Manhattan Project, but wouldn’t commit until he was assured Arline could come to New Mexico and he could visit her weekly.

Oppenheimer secured Arline a room at Southwest Presbyterian Sanatorium in Albuquerque. The newlyweds arrived in New Mexico in March 1943, and each weekend, Feynman borrowed a car or hitchhiked 200 miles round trip to see her. In between, they wrote one another, often in code or jigsaw puzzle piece letters, infuriating censors who reviewed Los Alamos mail in an effort to keep wartime activities secret.

Arline continued to impishly woo Feynman. In May 1945, she flooded Los Alamos with fake newspapers. Richard later recounted the incident in an authorized biography: “The whole damn place was full of them — hundreds of newspapers. You know the kind — you open it up and there’s this headline screaming in thick letters across the front page: ENTIRE NATION CELEBRATES BIRTHDAY OF R. P. FEYNMAN!”

A month later, Richard wrote to Arline: “This time will pass — you will get better. You don’t believe it, but I do.” Ten days later, he received a phone call from Arline’s father to come quickly. Borrowing a car from his friend (and later-confirmed Soviet spy) Klaus Fuchs, Richard picked up two hitchhikers in case he needed help changing a flat tire. He got three, with the last flat about 30 miles outside of Albuquerque. He hitchhiked the rest of the way and made it in time to say goodbye. Arline died on June 16, 1945.

In 1988, months after Richard had died at age 69 from abdominal cancer, biographer James Gleick found a letter from Richard to Arline, dated Oct. 17, 1946. In it, Feynman wrote: “I find it hard to understand in my mind what it means to love you after you are dead — but I still want to comfort and take care of you — and I want you to love me and care for me. I want to have problems to discuss with you — I want to do little projects with you.” He continued, “I am alone without you and you were the ‘idea-woman’ and general instigator of all our wild adventures.”

In "Perfectly Reasonable Deviations from the Beaten Track: The Letters of Richard P. Feynman," his daughter Michelle commented on her father's words: “The letter is well worn — much more so than others — and it appears as though he reread it often.”