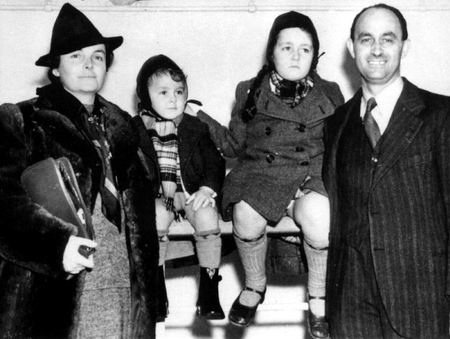 Laura, Giulio, Nella and Enrico Fermi are pictured here arriving in the United States in 1939. The photo is featured on the cover of Laura’s book "Atoms in the Family." The family fled Italy to escape persecution; Laura and the children were Jewish. Enrico, a Nobel Prize-winning physicist, arrived in Los Alamos in 1944 to work at the then-secret lab.

It would be his scientific achievements that would allow him to do so — being awarded the Nobel Prize in Physics ultimately saved the lives of his family.

In late 1938, Fermi left Italy to collect his prize at the annual ceremony in Stockholm, Sweden, taking with him his wife, Laura, who came from a prominent Jewish family, and their two young children. From there, the family quietly moved to the United States, escaping persecution and finding freedom in New York, where Fermi was hired as a physics professor at Columbia University.

Not long after, Fermi’s work led him to a top-secret lab in the mountains of Northern New Mexico, where his scientific genius would ultimately play a role helping end the bloodshed of World War II.

Fermi was born on Sept. 29, 1901, in Rome and his aptitude for math and physics was apparent from an early age. When he was 17 years old, he won a fellowship to study at the University of Pisa. When he was only 20, he graduated with a degree in physics and then accepted a position working with the famous German physicist Max Born in Göttingen for a semester.

When he returned to Italy from Göttingen, Fermi met 16-year-old Laura Capon at a soccer game with friends. He again left Italy and moved to Leyden to work with Paul Ehrenfest for a semester, but didn’t forget her. Fermi returned to Italy and, in 1926, became a professor of theoretical physics at the University of Rome, around the same time Laura was starting school there. In 1928, they were married.

Eventually, Fermi began to focus his research on the atomic nucleus, contributing to beta decay theory. In 1934, Irène and Frédéric Joliot-Curie discovered artificial radioactivity, and Fermi closely followed these developments. After this discovery, Fermi began conducting his own experiments in which he bombarded various elements with neutrons, which made many of the elements radioactive.

Fermi noticed that sometimes the level of radioactivity increased greatly — for example, when the neutrons first passed through paraffin, discovering that the material slowed down the neutrons. Fermi’s discovery of slow neutrons would help pave the way for future developments in atomic physics.

In 1938, Fermi was awarded the Nobel Prize “for his demonstrations of the existence of new radioactive elements produced by neutron irradiation, and for his related discovery of nuclear reactions brought about by slow neutrons.”

At Columbia University, Fermi worked on fission research and began investigating the possibilities of a chain reaction using uranium. The Fermis then moved to Chicago, where Enrico joined the university’s Metallurgical Laboratory. There he began work on a graphite “pile” — an experiment that would use graphite as a moderator for the uranium. Moderators are substances, like graphite and paraffin, that slow down neutrons, which lose energy in collisions with the atoms in the moderator.

Construction for Chicago Pile-1, or CP-1, began in November 1942. The pile was built in the squash courts underneath the university’s Stagg Field. Fermi led the experiment and CP-1 went critical on Dec. 2, creating the world’s first self-sustaining, controlled nuclear chain reaction.

The next step to develop an atomic bomb was to create an uncontrolled nuclear chain reaction, meaning the reaction produced a large amount of energy all at once. Many of the scientists who were a part of the CP-1 experiment were recruited to the top-secret Project Y lab in Los Alamos, where they would work to create the first nuclear weapons.

The Lab’s first director, J. Robert Oppenheimer, recruited Fermi as a division leader and an associate director. Named for Fermi, the Lab's new F Division was established in September 1944.

In addition to his position as a division leader, Fermi conducted theoretical and experimental research. He worked on the calibration of neutron sources, cross-section measurements, and alpha absorption. One particular experiment highlighted Fermi’s ingenuity. On the morning of July 16, 1945, Fermi was at the Trinity test site and observed the world’s first nuclear detonation:

“About 40 seconds after the explosion the air blast reached me. I tried to estimate its strength by dropping from about six feet small pieces of paper before, during and after the passage of the blast wave. Since, at that time, there was no wind I could observe very distinctly and actually measure the displacement of the pieces of paper that were in the process of falling while the blast was passing. The shift was about 2 ½ meters, which, at the time, I estimated to correspond to the blast that would be produced by ten thousand tons of T.N.T.”

In actuality, the Trinity test produced a yield that roughly doubled Fermi’s estimate. Off by only about a factor of two, it was still remarkably close given that his only tools of measurement were a few scraps of paper.

After the end of WWII, Fermi left the Laboratory in December 1945, although F Division had been dissolved in October. The Fermi family returned to Chicago, where Fermi became a professor at the University of Chicago’s newly established Institute for Nuclear Studies. Among other professional contributions, he worked both at the university and at nearby Argonne National Laboratory, the successor to the Metallurgical Laboratory.

Around this same time, Fermi returned to Europe for the first time since fleeing with his family more than a decade earlier. He attended various lectures and conferences, including a conference on cosmic rays in his native Italy, an area in which he had published papers.

Fermi continued experimenting, conducting research, and lecturing until an unknown illness prompted an exploratory surgery in the fall of 1954. Fermi died of stomach cancer on Nov. 29, 1954, at the age of 53.

International Holocaust Remembrance Day is an annual commemoration designated by the United Nations that includes worldwide memorial services, vigils and more. Jan. 27 is the anniversary of the 1945 liberation of Auschwitz-Birkenau, which was the largest Nazi concentration camp operated by Nazi Germany during World War II.

Additionally, Holocaust Remembrance Day is an annual commemoration designated by the U.S. Congress to mark the anniversary of the Warsaw Ghetto uprising in 1943. It is observed in April.

During WWII, many Jews who had fled Nazi-threated Europe found themselves working at the top-secret Los Alamos Lab, codenamed Project Y. These scientists, engineers, technicians, and others created the first atomic bombs to help end the world’s deadliest conflict.