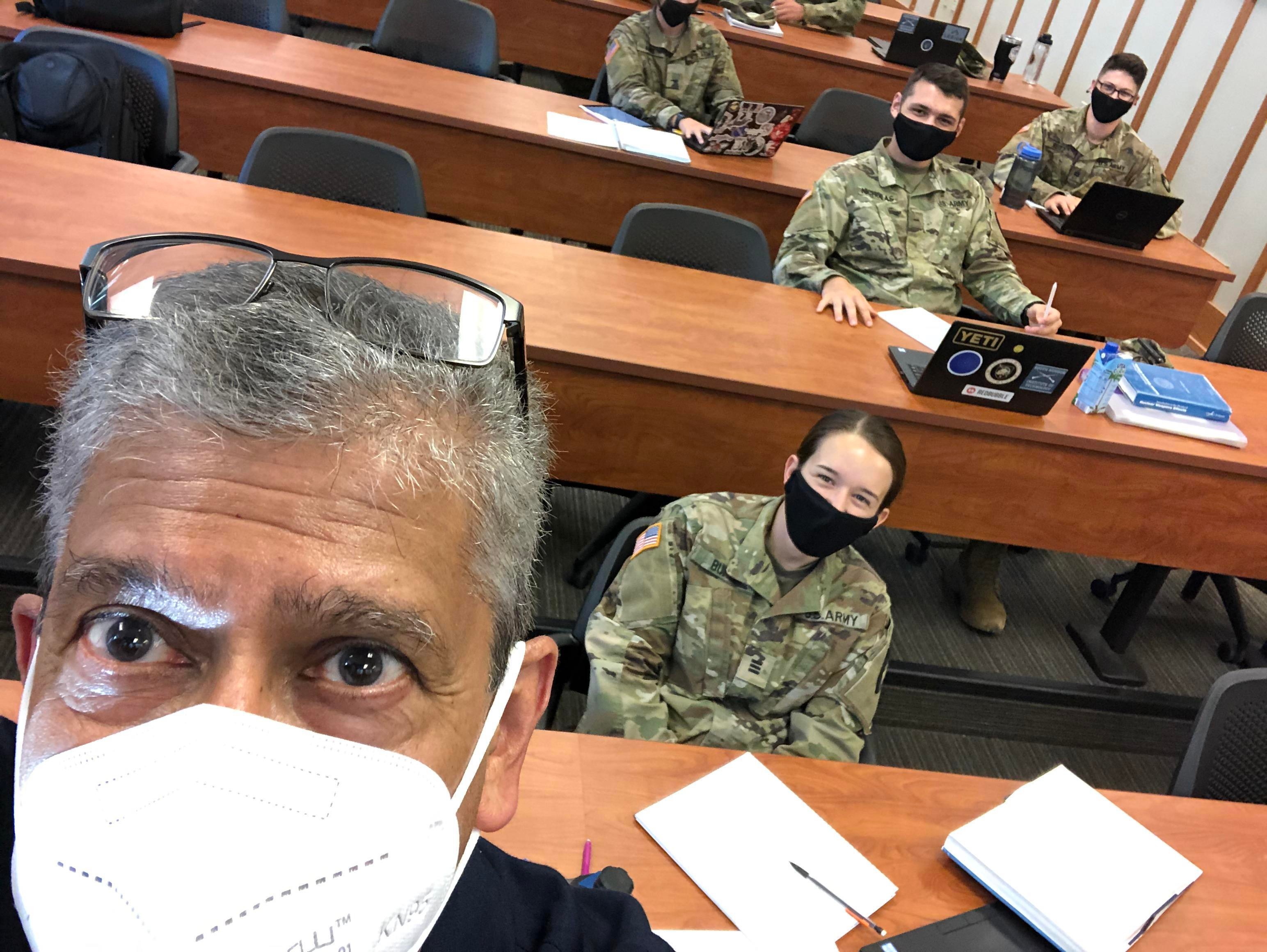 Chitanvis takes a selfie during class in September 2020.

Until recently, Los Alamos National Laboratory had a partnership with the United States Military Academy at West Point, in which a Laboratory physicist held a short-term professorial appointment, conducting his or her research from New York and teaching one or two classes per semester.

In 2017, Los Alamos physicist Shirish Chitanvis and his wife had been considering a move to the East coast, and “the stars aligned,” he says. Chitanvis was “handpicked to serve in an Intergovernmental Personnel Act exchange,” says Mike Port, director of Mission Integration in Los Alamos’ Office of National Security and International Studies.

Through this program, Port says, “not only are the West Point cadets learning complex scientific concepts from some of the brightest minds in the country, but they are also learning how Los Alamos can and will provide them with reach-back capability in their future careers in the event that they encounter a particularly vexing national security problem.”

Chitanvis says his “interest was piqued by the opportunity to further develop the relationship between the two institutions,” and he began teaching in 2018. The transition was challenging at first. “At the Lab, I’d been thinking for myself and doing my research or working with peers,” he remembers.

“At West Point, I taught students who might never have heard of the topics I was discussing, so it required a different mindset.” Chitanvis was up to the challenge. “I had no idea during the first 33 years of my career at Los Alamos that I would be a good teacher,” he says. “But I was well suited to it.”

Chitanvis hopes his students have learned “the way to tackle a problem—to think of it from a research physicist’s view,” he says. “Doing research involves being in a situation that is not always familiar to you. So how would you go about thinking about it? You have to eliminate obstacles to achieve your target.”

At his retirement ceremony in May, Chitanvis was presented with a United States flag that was flown over Los Alamos National Laboratory and West Point.

Will retirement mean a break from science? “Oh, heck, no,” Chitanvis says. His initial plans are to spend at least a couple of hours a day thinking about Einstein’s theory of gravitation. “That’s always been one aspect of physics that I never had the time to delve deeper into during my career,” he says. “Now is as good a time as any, I suppose.”