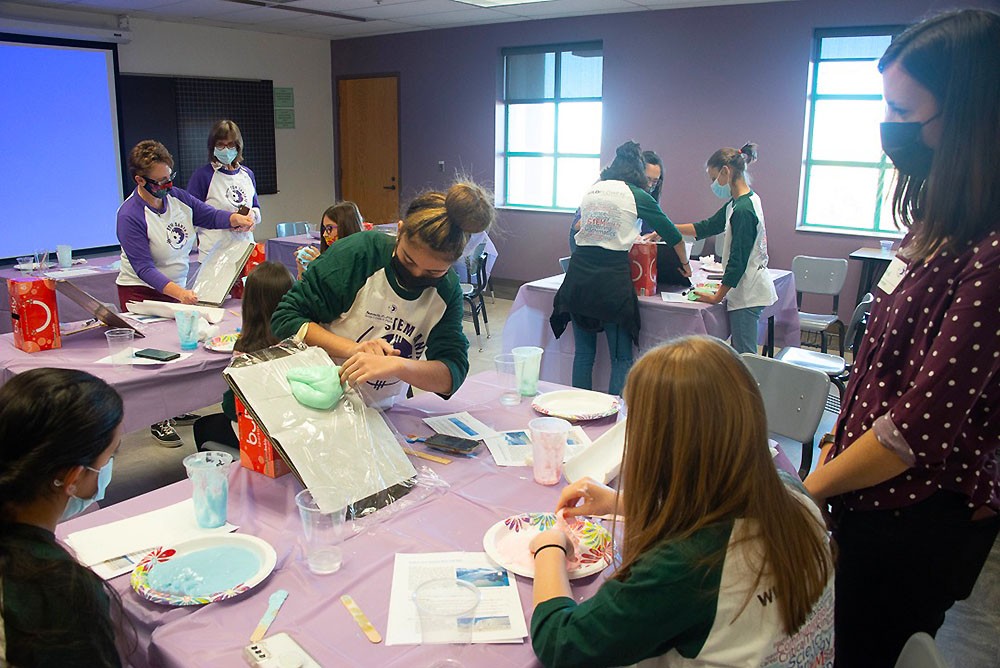 Attendees take part in the hands-on glacier activity led by Laboratory volunteers Elizabeth Hunke (at the back, second from left), and Sophie Coulson (on the far right). STEM Santa Fe

Over 75 girls from across Northern New Mexico gained a better insight into science, technology and engineering with help from ten women LANL researchers and engineers who volunteered as presenters at this year’s STEM Pathways for Girls conference.

The Lab volunteers ran six hands-on workshops at the event organized by nonprofit STEM Santa Fe which took place October 29-30.  Other LANL employees volunteered as workshop assistants and general help. The opening and closing keynote addresses were streamed online, but the workshops were held in person at Santa Fe Community College.

Open to Northern New Mexico girls in 5th through 8th grade — the age range the most vulnerable to losing interest in STEM — the event provided hands-on learning, encouragement, and connections to females with similar interests that ultimately aims to boost attendees’ interest in STEM.

Two of the Laboratory volunteers, scientist Elizabeth Hunke and postdoctoral fellow Sophie Coulson, ran a workshop that looked at how glaciers and ice sheets move and melt, using goo to explore how ice caps spread and glaciers flow downhill. The attendees used different surfaces and different recipes of goo to discover the factors that affect how quickly ice moves.

“We all had a lot of fun getting messy, making the glue-based glacier-analogue goo,” says Coulson. “The girls designed some creative experiments and we had some great discussions about how the experiments related to real-life glaciers and ice caps and how these environments are being (and have been) affected by climate change.

“Underrepresentation of women and minorities in STEM is an issue I have experienced my whole career, and I hope these kinds of events can help us move towards a more equitable future,”

The importance of role models

“It is vital for girls to connect with relatable STEM role models to nurture their interest in STEM.” says Germann. “We made sure all the workshops were presented by local Northern New Mexico women at different stages of their STEM careers.”

Elizabeth Hunke agrees: “Female role models were absolutely essential in my career choices, and it's important to me to step into those roles for even younger kids,” she says. “I think it's important to expose all kids -- and girls especially -- to science as a fun learning activity that's not intimidating.”

In addition to LANL, the workshop presenters came from organizations that included Sandia National Laboratories, the NM Office of the State Engineer, and the Railyard Park Conservancy. The conference theme was Earth Stewardship through STEM, and workshop topics ranged from glaciers to aquaponics to wildfires.

Among other donors and sponsors, Laboratory operator Triad provided financial support for the event.