Kane Fisher, a Yupik Eskimo, has made a name for himself as a commercial fisherman, athletic coach, mechanical engineer, and mentor. 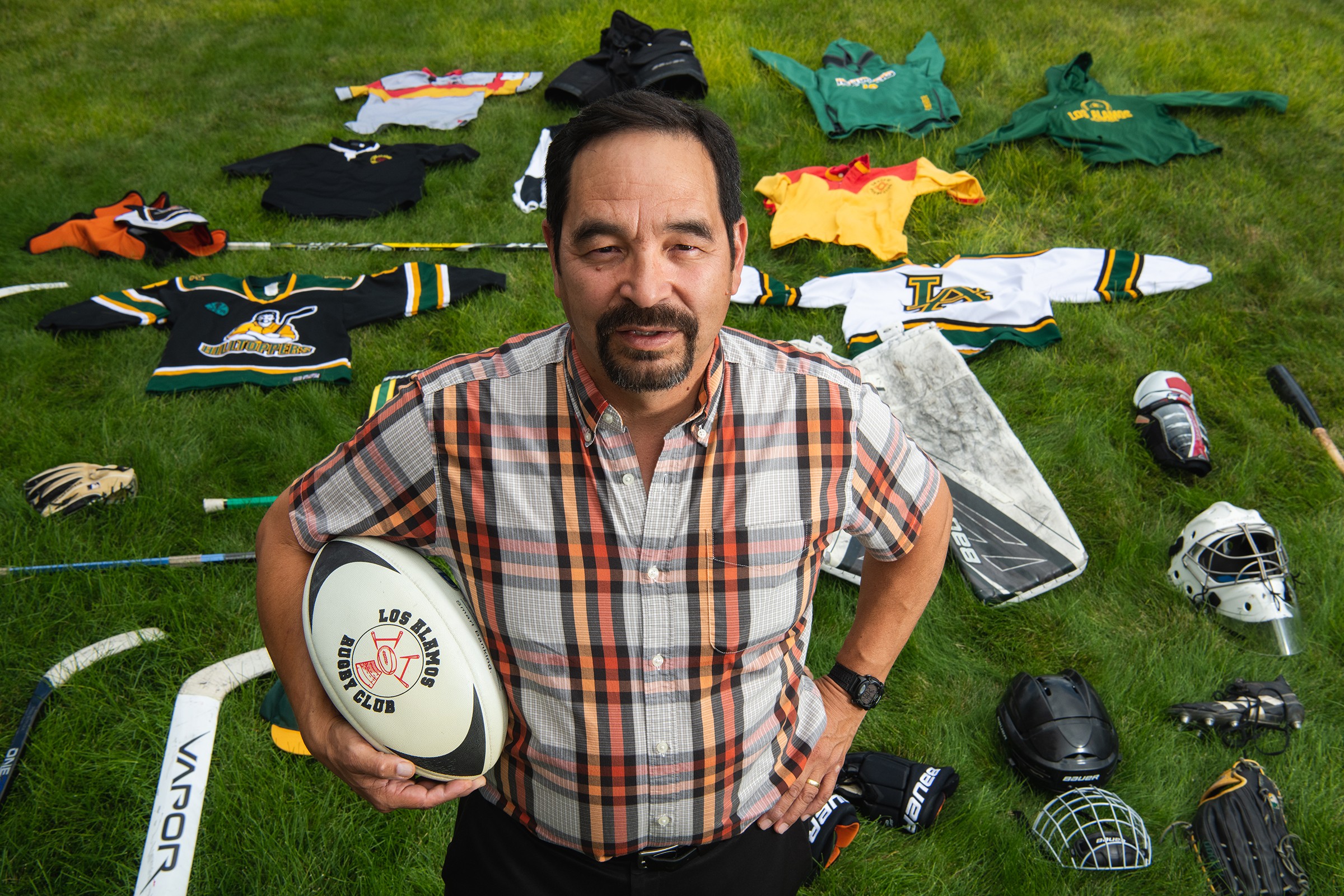 Fisher poses with gear from the various sports he’s supported and coached over the years. Los Alamos National Laboratory

“My experiences in a harsh place like Alaska have served me well,” explains Kane Fisher, a Yupik Eskimo who now works at Los Alamos National Laboratory. “It was a place where we played as hard as we worked. I grew up hunting and fishing, taught by my father, who was a school teacher.”

That outdoor education came in handy after Fisher graduated from high school. “I had no trust fund or any reserves of money when I went to college, so I sent myself through school by working as a commercial fisherman on fishing boats in Kodiak, Alaska,” Fisher remembers.

After earning a graduate degree in mechanical engineering, Fisher took a job at Los Alamos. One day, he received a phone call from a fisherman friend, who asked him to be the captain of a new fishing boat. “So, I went to my boss here at the Lab and told him about the opportunity,” Fisher says. “My boss told me, ‘Go ahead and do it. You’ll still have this job when you get back.’ I kinda looked at him, as in, ‘Are you kidding?’ But he wasn’t, and that’s what I did for a season.”

During that time, Fisher appeared on the Discovery Channel’s Deadliest Catch, a reality television series that features fishing vessels in the Bering Sea.

After his fishing adventure, Fisher returned to Los Alamos and began working in the Lab’s weapons programs. “Right out of the gate, we end up delivering a new component to the nuclear stockpile—that was my first project,” Fisher remembers. “I lucked out on achieving such a deliverable—I mean, there are folks here who’ve been working for more than 25 years without ever delivering a new component to the stockpile.”

That initial success sent Fisher on a career path that included work at the Lab’s tritium and plutonium facilities. “Eventually, as the deputy for all engineering, I was in charge of all plutonium machining and pit-making processes,” says Fisher, noting that he was involved in making the first W88 diamond-stamped plutonium pit (nuclear weapon core) at Los Alamos in 2007. When a pit (or other weapons component) is diamond stamped, it is literally stamped with a diamond shape as a visual indicator that it has met all design, manufacturing, and quality requirements and that it is ready to be used in the nuclear stockpile. “It was a big deal,” Fisher remembers. “New Mexico Senator Pete Domenici and other dignitaries came to Los Alamos for the celebration.”

As focused as Los Alamos is on building pits, sometimes pits must come apart (for example, to either be recycled into new pits or to be broken down into plutonium oxide powder, as part of the Lab’s nuclear nonproliferation work). Now, after nearly 29 years at the Lab, Fisher says he is one of only three people in the world who has taken apart every single retired and enduring stockpile pit.

“It’s a habit for me, breaking records,” Fisher says. “In my recent job fabricating detonators, my team and I consistently broke records on the number of diamond-stamped detonators ever produced within short timeframes.”

“I grew up doing all kinds of outdoor things, so when I had the opportunity to give back, I became a scoutmaster for the Boy Scouts,” Fisher says. “It’s an opportunity to counter the softness found in some  of today’s youth, giving them a chance to experience outdoor stuff like canoeing, shooting arrows from bows, and hiking trails while also learning how to navigate, understand astronomy, and acquire the basics of engineering.”

In addition to his involvement with the Boy Scouts, Fisher is a sports fanatic. “I come from an extreme, so-called ‘real-man’ world, and that led me to participate in some tough sports, like wrestling and rugby,” he says. “I currently serve as a high school assistant varsity baseball coach and the gear manager for the Los Alamos Hockey Association.” In this role, Fisher purchases, distributes, and fits every single piece of gear for the more than 100 kids in the association. Fisher has coached rugby, football, and baseball for more than 25 years.

Fisher sees a direct correlation between sports and his work at Los Alamos. “Having coached so many young athletes over the years has improved how effectively I interact with the younger generation here at the Lab,” Fisher says. “It’s my responsibility to pass on what I’ve learned to the new engineers, who are hungry for such knowledge. I’ve had 15 students who I feel I’ve mentored the right way, so that they succeed as well as I have.” ★