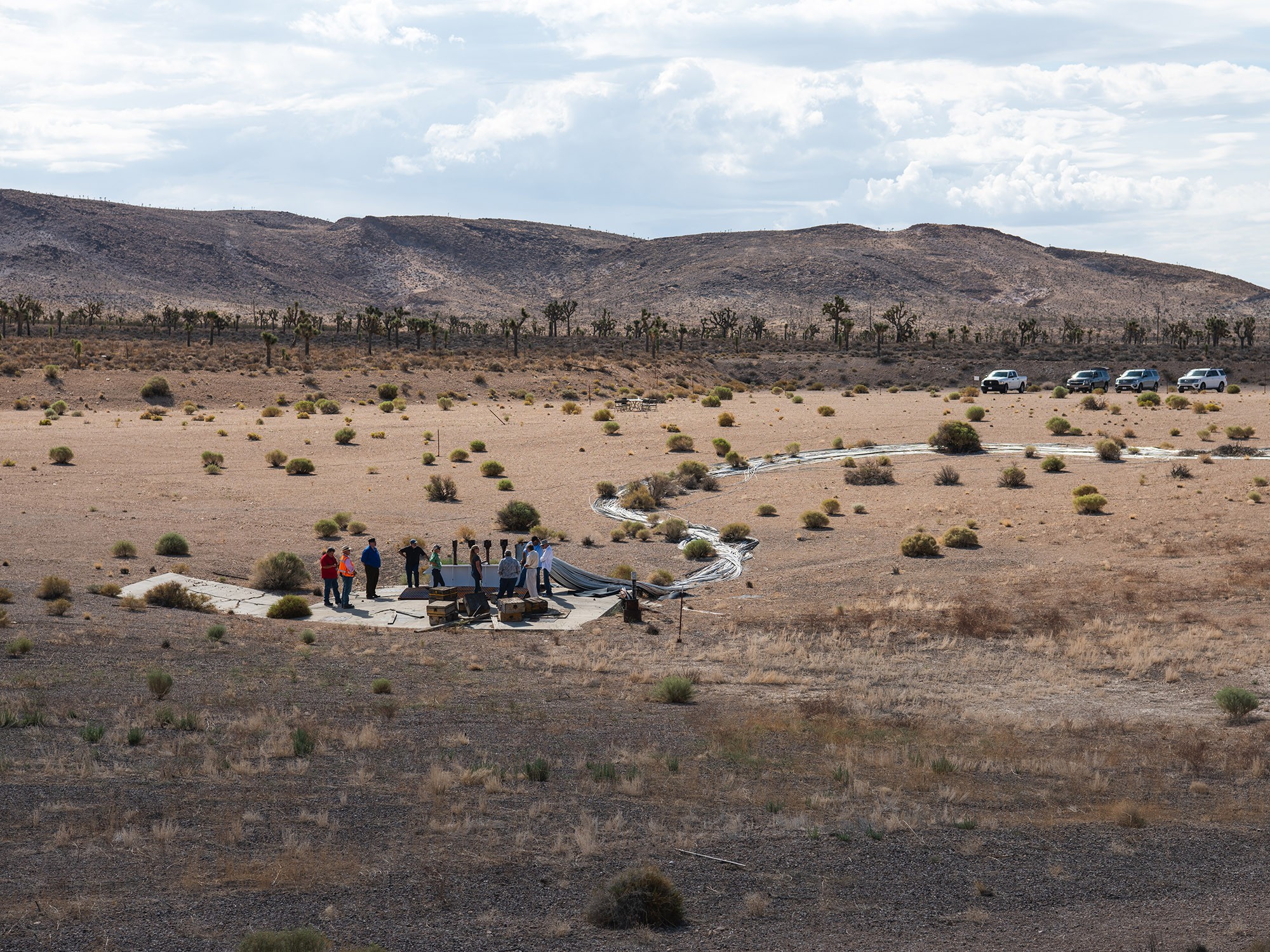 Los Alamos visitors stand at ground zero of the Divider crater at the Nevada National Security Site in August 2022. The Divider nuclear test marked a turning point in both the nation’s and the Laboratory’s history: the moment the United States pivoted from underground nuclear testing to stockpile stewardship to evaluate the health of America’s nuclear weapons. Los Alamos National Laboratory

On September 23, 1992, the United States conducted Divider, an underground test at the Nevada Test Site. The test, designed and executed by scientists at Los Alamos National Laboratory, was the nation’s 1,054th and final nuclear weapons test before the current testing moratorium, marking the end of an era that began with the Trinity test 47 years prior.

“Nuclear tests were confirmation of our ability to predict a variety of nuclear explosion characteristics in a fully integrated way—the one-time measurement of many things that were evolving on a nanosecond time scale,” explains physicist David Hollowell, who was on the secondary design team for Divider. “With the Divider nuclear test, this integrated testing approach stopped being the way the United States could improve the validation of our confidence in predicting the U.S. nuclear stockpile or any nuclear design.”

Divider was never planned as the final nuclear test; rather, Divider just so happened to be the last test conducted by the United States before a short-term testing moratorium went into effect on October 1, 1992. “Of course, several months into the nine-month moratorium, the Clinton administration extended that moratorium indefinitely,” Hollowell says. “And here we are, three decades later.”

Today, instead of nuclear testing, the United States relies heavily on nonnuclear and subcritical experiments coupled with advanced computer modeling and simulations to evaluate the health and extend the lifetimes of America’s nuclear weapons. This approach is called stockpile stewardship.

“At the inception of the stockpile stewardship program, it was unclear whether the stewardship approach would work, and if so, for how long,” says Bob Webster, deputy director for Weapons at Los Alamos. “That it has been successful for 30 years is a remarkable achievement.”

That success is largely due to the development of tools (such as proton radiography and improved theoretical models) and infrastructure (such as the Dual-Axis Radiographic Hydrodynamic Test facility and the Plutonium Facility) required to understand what happens to weapons materials and components as they age.

State-of-the-art supercomputers have also been essential to the success of stockpile stewardship. “As weapons age, or material substitutions occur, the underlying physical models of the weapon components become increasingly complex,” Webster explains. “As the physical models become more complex, an ever-increasing need for high-performance computing emerges. Stockpile stewardship has been successful to date largely due to major advances in high-performance computing.”

However, whether that success will last another 30 years is unknown. “As is typical in science, the question of whether stewardship remains successful indefinitely is not yet decided,” Webster cautions. “In part, continued success will depend on balancing the needs of the nation and the capabilities of the stewards.” ★