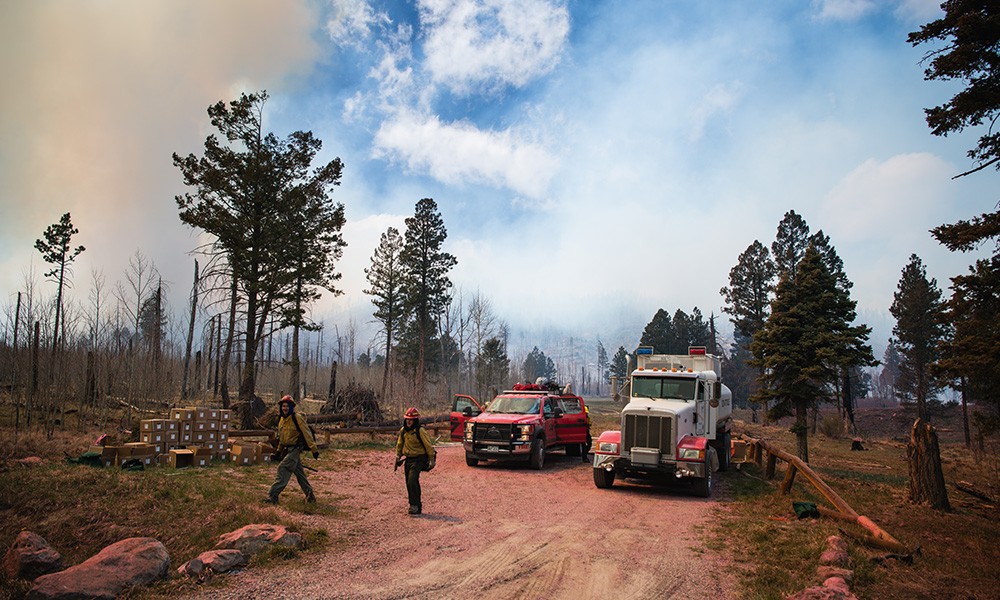 Flames crackling, smoke billowing, evacuation bags packed, and nerves on end. In recent months, wildfires have swept through the western United States, including one just a few miles from Los Alamos National Laboratory.

Experts warn that the prevalence of fires is increasing. According to a February 2022 report from the Department of Homeland Security, “Wildfires across the U.S. and around the world are becoming more frequent, costly, and dangerous. Risk factors include urban sprawl into previously undeveloped lands prone to wildfires and climate change hazards.”

The threat fires pose to national security is rising as well. “As a national security concern, wildfire has several facets,” says Los Alamos scientist Rod Linn, who creates computer models that predict how wildfires will behave in different situations. “Wildfires are threatening everything from energy security to water security.”

Los Alamos scientist Jon Reisner notes that in addition to wildfires that start naturally or by accident (from an unextinguished cigarette, for example), “wildfires or urban fires can be intentionally induced by foreign governments via detonation of nuclear weapons or by ignition of numerous small fires that can upscale into large fires under the right conditions.”

Whatever the cause, Reisner explains, “Fires can lead to fear, panic, and possibly a large number of fatalities; impact critical infrastructure such as power, gas, and water lines; disable military equipment and personnel; and hide an adversary’s troop movement. Longer term, fires could significantly impact food, crops, and water supplies.”

When it comes to water, “wildfires are a catalyst for large-scale ecosystem change,” Linn says. “They have the ability to destroy or change the quality of water in large regions.” He adds that even if the fires are far away, the trickle-down effects can be far reaching.

“If we have a growing number of fires in Colorado, where the Colorado River watershed is, they pose a huge risk to significant water resources downstream—as far away as California.” Water scarcity can affect agricultural production, food availability, and prices. A disrupted water supply could lead to national instability and economic unrest.

Smoke generated by wildfires is also a concern because a variety of critical national security operations are also susceptible to smoke. “When significant smoke is generated over large areas it can impact both health and visibility, which can impact flight operations, with this concern becoming more common in a warming world,” Reisner says.

Why has the number of fires increased recently, and will it continue rising? Linn says the answer is complicated. “Some people will say that’s climate change and others will say that it’s fire exclusion, which translates to too much fuel on the ground. We’ve been putting fires out as fast as we could for the past 100 years. The environment systems are really out of balance. I think it’s probably a combination of the two. Unfortunately, when they come together, it creates a bad scenario.”

Adding to this bad scenario is the fact that wildfires are not only increasing due to climate change, but they are also contributing to climate change. “Climate change is producing a growing number of large fires and burning fuel that in the past was not expected to burn,” Reisner says. “For example, in 2021 a significant heat wave in the Pacific Northwest desiccated trees found in the temperate rainforest of British Columbia, leading to a fire that induced the highest ever injection of aerosol into the stratosphere. Further, this fire produced clouds that produced as much lightning in one day as what typically occurs in one year, and the lightning then ignited numerous fires downstream of the initial fire.”

Reisner says similar heat waves could occur in other regions, such as the northeast United States, leading to fires that not only consume large tracts of forest, but also affect cities. Additionally, the number of fires burning in the sub-surface arctic peat moss has increased. The burning peat moss releases a lot of carbon dioxide and methane, leading to further global warming.

Linn agrees that wildfires are both a result of and contributor to climate change. “Wildfires are a source of aerosols and carbon release, so they have the ability to influence local and regional climate.”

By developing high-fidelity modeling tools that predict fire behavior and provide data for mitigation, Los Alamos scientists are developing new ways to address growing and changing fire threats throughout the world and even locally, at the Laboratory. “The first step is to reduce fuel loading near facilities, including both surface and vertical fuels such as trees or shrubs,” Reisner says. “Next, buildings should be spaced and engineered to withstand fires and include several layers of filters to mitigate smoke impacts on personnel and property.” At the Laboratory, crews remain vigilant about removing underbrush, downed limbs, and other fire fuels from the property and establishing a defensible wildfire perimeter to ensure all hazardous materials on-site stay safe.

Prescribed burns—intentionally lit and carefully controlled fires—are another way to help prevent big wildfires. Experts plan these fires to reduce excessive vegetation that could provide fuel for bigger wildfires. Los Alamos researchers work closely with partners, including the U.S. Forest Service and the U.S. Geological Survey, to create models that predict the behavior of prescribed burns and wildfires nationwide. Linn says he is in favor of prescribed burns, but adds, “We need to do our homework so that we’re doing them safely. The more homework we can do, and the more we understand how to make them safe, and we understand the conditions on which they can be done safely, the better success we’re going to have.” ★