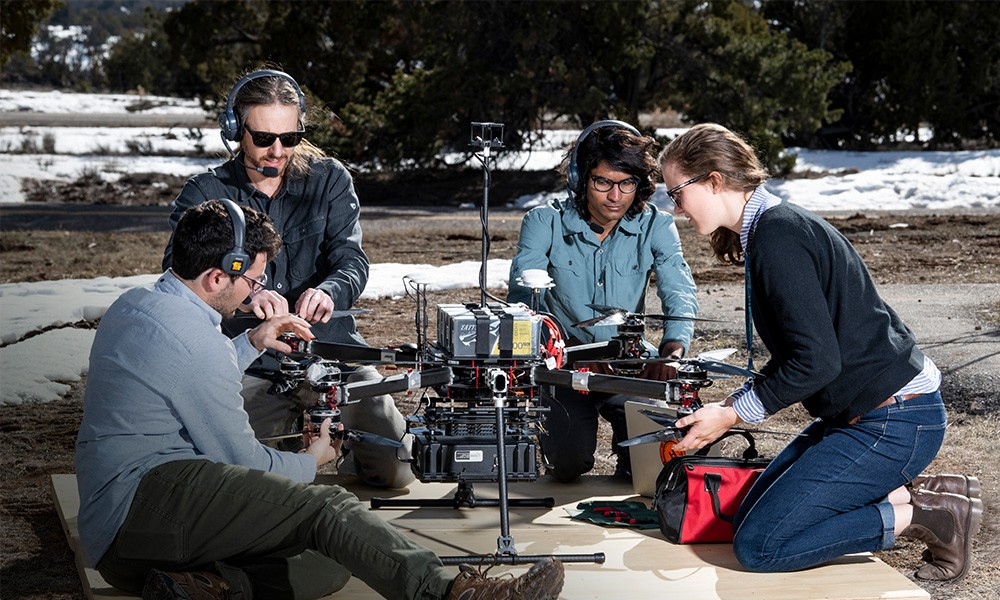 Decreasing greenhouse gases, helping oil and gas companies cut costs, and ensuring nuclear safety—it’s all in a day’s work for one team of scientists from Los Alamos National Laboratory.

With funding from the U.S. Department of Energy’s Advanced Research Projects Agency, scientists have created software that uses machine learning codes to analyze wind speed, wind direction, and how methane is dispersed into the atmosphere. When paired with special infrared laser sensors that can be mounted just about anywhere—on drones, outside a natural gas plant, or inside a facility—the technology can work autonomously to trace the source of methane leaks.

“Methane is a greenhouse gas about 25 times more potent than carbon dioxide,” says Manvendra Dubey, the lead scientist on the project. “If we can reduce methane leaks, we will reap benefits immediately, as methane’s lifetime is short. This offers a bridge to carbon neutrality, because, if you reduce methane, you will immediately see lower carbon dioxide, the major long-term greenhouse gas.”

Dubey says methane leaks are common in the oil and gas industry, but leak detection has always been done manually, which is time consuming. Wind blows methane away from the location of the leak, so pinpointing the leak can be difficult. “Often there’s a delay, and the thing has been leaking for months,” he explains. “There’s a need to automate the process and add 24/7 monitoring.”

So, working with the Los Alamos team, a California company called Aeris developed an extremely sensitive methane sensor that uses a mid-infrared laser. Los Alamos researchers then developed software that uses machine learning code to translate the information from the sensor. Because the system uses artificial intelligence and machine learning, it can run continuously in the background to detect problems early on. Dubey points out that stopping leaks saves companies money while also helping the environment. “It’s a win-win.”

Aaron Greenlaw Meyer, a researcher on Dubey’s team, says he believes the technology, which is called the Autonomous, Low-Cost, Fast Leak Detection System, has the potential to make a significant difference. “It’s a nice way to reduce our carbon footprint,” he says, “because all of this oil and gas infrastructure inevitably has leaks associated with it, but just by finding those leaks, we can really put a stop to a lot of fugitive emissions that we didn’t know were there before.”

Meyer describes this approach as far more practical than trying to completely overhaul the energy sector to reduce carbon emissions. “This is kind of low hanging fruit, as it were, to be able to mitigate the climate impacts of oil and gas extraction,” he says.

Recently, Lab scientists have begun applying the software to detect a different kind of leak—those in nuclear waste storage drums kept underground at sites such as the Waste Isolation Pilot Plant in Carlsbad, New Mexico. “If methane and other gases are produced by reactions in the waste and then vented to avoid accumulation and pressure buildup, we can measure them in the storage facility with our ultra sensitive instruments prior to any risk of explosion or exposure,” Dubey explains.