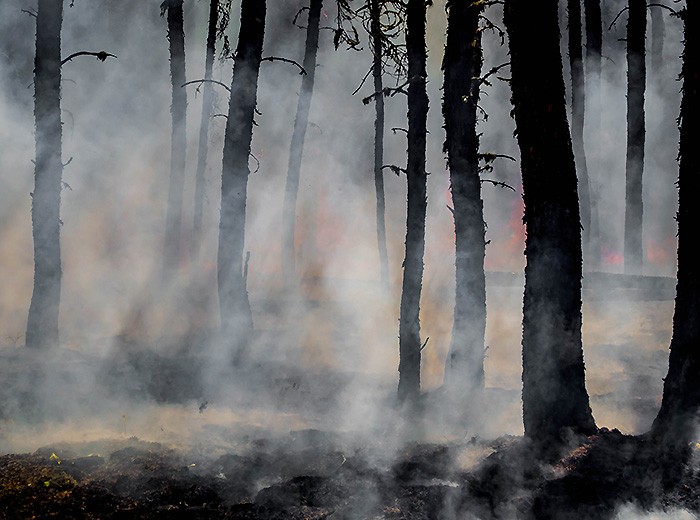 The skills taught during the camp can aid in wildfire suppression.

From December 7-18, 2020 Los Alamos National Laboratory hosted a two-week virtual camp in wildfire simulation and visualization for 12 undergraduate students, the majority of them Native American.

Using the real-world data LANL scientists use to study wildfires, the students learned how to use the data analysis and visualization software application ParaView to develop graphical and animated representations that can aid in wildfire suppression to protect the public, ecosystems, watersheds, and air quality.

Part of a multi-year initiative through the Laboratory’s Student Programs Office (SPO) to increase the number of Native American student interns at Los Alamos, the pilot program was funded by the Laboratory and the U.S. Department of Energy’s Workforce Development for Teachers and Scientists Office within the Office of Science.

“The camp was a huge success and it is amazing how much the students were able to learn in such a short amount of time,” says organizer Cassandra Casperson of the SPO.

“The camp was a huge success and it is amazing how much the students were able to learn in such a short amount of time,” says organizer Cassandra Casperson of the SPO. “In addition to developing their technical and professional skill sets, the students learned about the work being done at LANL and other national laboratories.”

Many of the attendees are pursuing undergraduate degrees in computer science, environmental sciences, or engineering, following a call to Native organizations and higher education establishments across the region.

The participants included Sage Crosby from Pojoaque Pueblo, a civil engineering major at Stanford University. Sage is a former LANL Scholar who is also one of 12 participants in a mentoring program supported by Laboratory operator Triad and the LANL Foundation. Her mentor is Phoebe Suina, a member of San Felipe and Cochiti Pueblos, who is founder and president of High Water Mark, LLC a 100% Native American, woman-owned environmental consulting company.

The program's technical leaders were John Patchett on the computational side, and Rod Linn whose expertise is in wildfires, supported by 18 other Laboratory volunteers, who helped students with hands-on activities, and gave talks on their academic and professional experiences.

“Many of the students are now in the process of applying for summer internships which is one of the primary outcomes we wanted to achieve with the program,” says Casperson.

Caleb Adams, a student at Western New Mexico University majoring in computational and applied Mathematics, is one of the participants now looking at internships at the Laboratory.

“The Wildfire Camp was a valuable opportunity to meet potential mentors who are doing the kinds of research that interest me,” he says. “I was already interested in a career at a national laboratory. After meeting several scientists from different disciplines that work at LANL, and hearing their experiences, I am more driven to explore that career path.”