Tommy Rockward: Refining the recipe for success for minority scientists 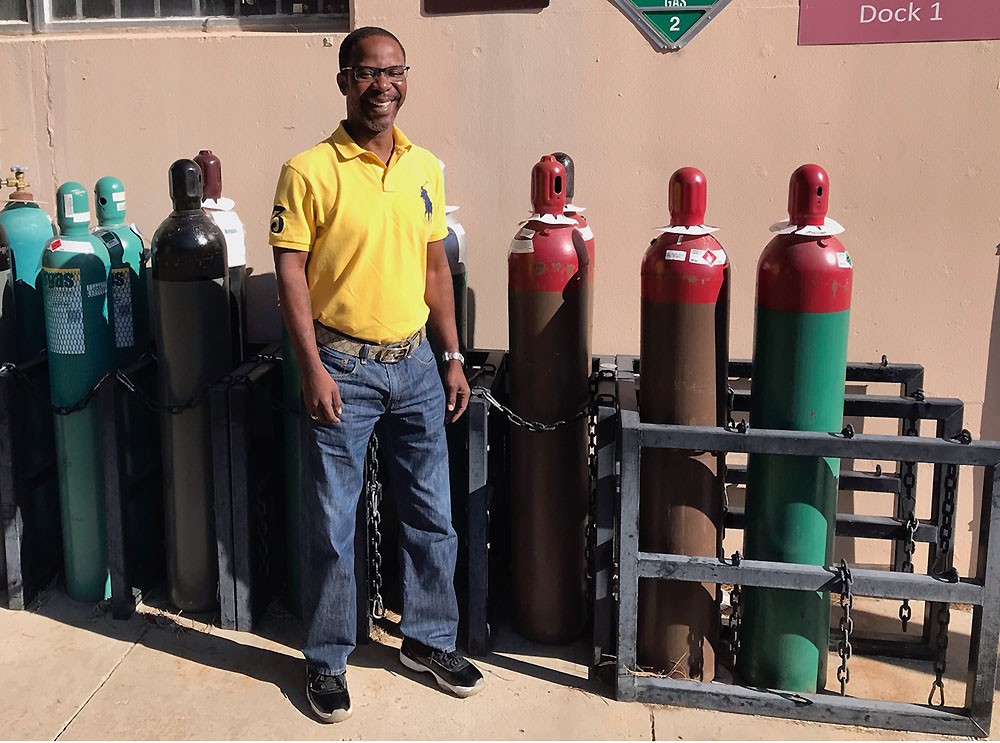 Tommy Rockward grew up in Houma, Louisiana, southwest of New Orleans, in a close-knit family. He was the youngest of nine children. His school district was well resourced, and he remembers delighting in chemistry in fourth grade and gaining confidence under encouraging teachers.

“I always smiled in those math and science classes,” he says. “I felt like I fit in.”

Some of Tommy’s high school teachers had taught his older cousin, who by then had a doctorate in physics (and soon became the department chair at Morehouse College), and they said, “Are you going to go to college like your cousin?” And he did.

When Tommy first stepped foot on-site at Los Alamos National Laboratory in 1997, he was a graduate student in applied physics, not from Morehouse but another historically Black university, Southern University and A&M College. He says he was pleasantly surprised by the warm reception he received at this remote New Mexico lab, despite its scant number of Black employees.

The quest to generate energy from hydrogen fuel cells was an emerging field then, and Tommy’s aspiration was to help remove limitations through scientific research. “I wanted to be amongst the best,” he says, and he found himself in a group where most of the advances in fuel cells were coming from.

His first mentor, Tom Zawodzinski, guided Tommy as he researched optimizing polymer electrolyte fuel cell (PEFC) performance in the presence of hydrogen reformate, a process to extract hydrogen from gas.

“I think everyone went out of their way to be helpful at work and inclusive outside of work,” Tommy says, recalling dinner invitations to co-workers’ homes.

Tommy had his sights set on working at the Laboratory but there wasn’t an opportunity right away. After year-to-year contracts with LANL and then a stint in private industry in California, he landed a permanent position with the Lab. “I was very excited at the opportunity to return and begin my career. I did not have any fears at all; it was really like returning to work with close friends,” he says.

Surrounded by talented scientists up and down the hall who were generous and kind — and well-equipped labs in which to explore — Tommy had everything he needed to grow in his career over the next 21 years. “When you work with people in the field, you start thinking just like them, and the next thing you know you start making impactful contributions,” he says.

In his office hangs a reference to the research he’s best known for, which led to an international standard on hydrogen fuel quality.

From that solid standing, Tommy had the courage to imagine how more people like him could find successful careers at Los Alamos, too.

Alongside some of his colleagues, he has mentored students for 10 years and he always shows up to encourage them and give them scientific guidance on projects. Last summer, Tommy briefly entertained the idea of taking vacation, but his deep loyalty to his students won out.

“In order for Los Alamos to continue to be the best lab, we need to keep recruiting the best,” Tommy, now a member of the Lab’s Materials Synthesis and Integrated Devices group, says. “And how can we recruit the best if we don’t look everywhere?”

He recalls a pivotal conversation with former Laboratory Director Charlie McMillan, during which he and other colleagues presented a vision for transforming the ethnic diversity of the Laboratory’s STEM workforce. That meeting led to the creation of LANL’s African American Partnership Program (AAPP), funded by the Director’s Office, to offer research experiences for graduate students in STEM disciplines.

AAPP began in 2014 with six students from historically Black colleges and universities, and has to date supported more than 150 students while they completed their graduate degrees and trained to become attractive candidates for the next generation STEM workforce, Tommy says.

“He has been an inspiration to so many of us at LANL through his tireless and selfless efforts toward improving the inclusivity and culture here,” said Laboratory astrophysicist Nicole Lloyd Ronning. “He has been responsible for bringing in and supporting/mentoring (both scientifically and personally) a very large number of our Black students. Not only does he actively and successfully participate in many recruiting events, he very often personally follows up with students — it's really clear how much he cares.”

Tommy is also co-chair of SOUL, the Lab’s African American Employee Resource Group. Through SOUL, he’s met with local school district officials and county police to help ensure all people feel safe and welcome in the larger Los Alamos community. “If you don’t feel like your kids are treated fairly at school, it will impact your work here and you’ll uproot yourself,” he says.

Recently, the AAPP was renamed the Underrepresented Minority Program to include Hispanic-serving institutions and tribal colleges and universities.

This aligns with the National Nuclear Security Administration’s Minority Serving Institution Partnership Program (MSIPP), established in 2012 “to build a sustainable pipeline between the Department of Energy's sites/labs and minority-serving institutions (MSIs) in STEM disciplines, and bring a heightened awareness of NNSA plants and laboratories to institutions with a common interest in STEM research fields.”

Year after year, the NNSA rates the Lab “excellent” as a minority-serving institution. With almost 16% of its researchers, scientists and engineers being from underrepresented minorities (Black, Hispanic/Latino, Native American) and almost 15% of research/technical management, Los Alamos is arguably one of the most diverse national labs (its workforce overall is 49% non-white).

About a quarter of grad students funded by the Lab are from underrepresented minorities, as are more than 40% of undergrad students, according to the Lab’s 2021 demographics.

Many of these relationships are impressively long-lasting. Tommy pulls up a PowerPoint presentation that tells the story of Stefan Williams. When Stefan developed a standalone humidification system for fuel cells as a Los Alamos summer intern in 2015 through an NNSA program, he was fresh out of Morehouse College with a bachelor’s degree in physics. Now, he’s a graduate research assistant in the Materials Physics and Applications Division, funded through AAPP. Once he completes his doctorate in chemical engineering from the University of Tennessee, Knoxville, Stefan hopes to launch his career at LANL.

Stefan’s story is one that warms Tommy’s heart, and he’ll be happy wherever Stefan gets his first job. “They serve as a commercial for us; there’s no better way to spread the word that Los Alamos is a great place than through students,” he says.

But if Tommy could make one wish come true, it would be to see more Black students like Stefan turned into staff right here at Los Alamos. That’s the harvest he’s waiting for. When AAPP began, barely half a percent of the Lab’s workforce was Black, and now it’s about 1.4%, he says.

“I want to see the programs that I’ve initiated grow and become more impactful,” he says. “The goal is to see these students get hired for permanent positions here at the Lab.”