'The Gatekeeper to Los Alamos'

Dorothy McKibbin went far beyond her job duties as a secretary, becoming a guardian of the Manhattan Project 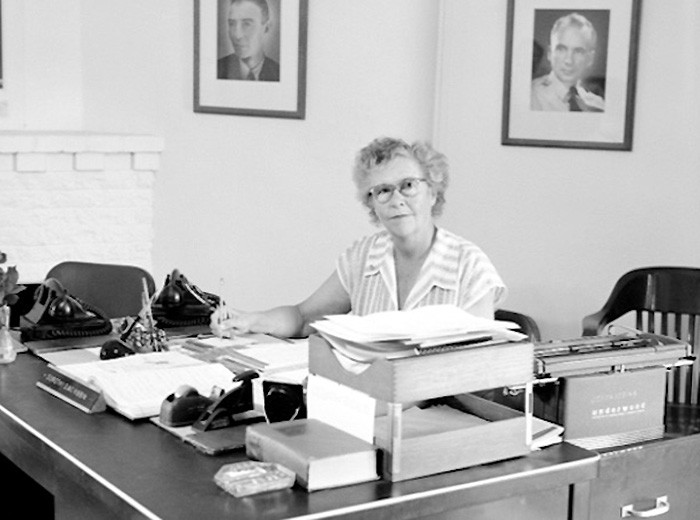 Dorothy McKibbin in her office at 109 East Palace in Santa Fe in July of 1958. She worked at the Lab until the Santa Fe office closed in 1963. As the first person to process Lab staff before they started work, she became known as “The Gatekeeper of Los Alamos.”

To mark the announcement of the Laboratory’s planned McKibbin Conference Center as part of its return to Santa Fe, let’s look in more detail at Dorothy McKibbin’s time at the Laboratory.

McKibbin Cards and the nickname

Dorothy was hired in the spring of 1943 as a secretary at the then-secret Los Alamos Laboratory, though her duties went beyond the traditional job title — including hosting weddings for Lab staff in her home, taking phone calls from her famous boss in the middle of the night and even scanning the skies for Japanese fire balloons.

But the task that brought her the most notoriety — and the endearing nickname — was checking in new staff to work on the atomic bombs that would later help end World War II.

Prospective employees received letters directing them to Dorothy’s Santa Fe office at 109 E. Palace. Before anyone headed up the hill, Dorothy typed up the new employee’s personal information on what quickly became known as the McKibbin Card. They were issued to all employees during the Manhattan Project and verified their employment.

A hunch and a job offer

One day in late March 1943, Dorothy was crossing the street in Santa Fe when she ran into local businessman Joe Stevenson. Joe knew she was looking for work and asked Dorothy if she would be interested in a job as a secretary.

“Secretary of what?” Dorothy asked.

“Secretary — don’t you know what a secretary does?” replied Joe.

Dorothy had a strong hunch the job had to do with the government or World War II. Joe gave her 24 hours to think it over and, if interested, to meet her potential boss the following day in the lobby of the La Fonda hotel.

The next day in the hotel lobby, a man with “wiry black hair and bright blue eyes” introduced himself as “Mr. Bradley.” As Dorothy answered his questions, Mr. Bradley “leaned in and stared intensely” at her.

Dorothy later recalled, “I never met a person with a magnetism that hit you so fast and so completely,” she said. “I knew anything he was connected with would be alive.”

Alive indeed. When Dorothy reported to work on her first day, Mr. Bradley would reveal his real identity as famed scientist and leader of Project Y, J. Robert Oppenheimer.

You can watch a video on Dorothy McKibbin here.

After World War II ended and her boss and friend Oppenheimer left the Lab, Dorothy stayed. She worked at the Lab for 20 years, retiring in 1963 when the Lab’s Santa Fe office closed. Dorothy lived in Santa Fe until her death in 1985.