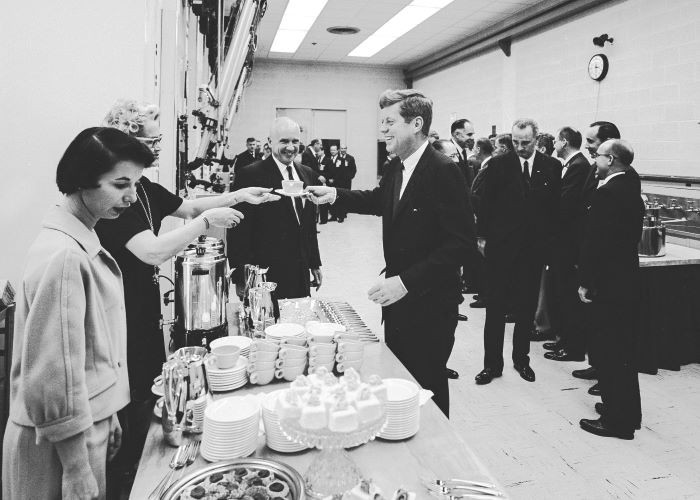 At the time, the Cold War was in full swing and the space race was in its infancy. The year before, the Soviets celebrated cosmonaut Yuri Gagarin’s circling the Earth. In response, the president announced to Congress the goal of landing an American on the moon within a decade, despite the fact that at that time neither the U.S. nor Russia had rocket capabilities to achieve such a mission. It was a scientific challenge LASL was primed to tackle.

The Lab worked on nuclear propulsion to potentially power rockets destined for space, an endeavor was known as Project Rover. To get a firsthand look at the developments, President Kennedy visited the Lab with Vice President Lyndon Johnson, congressmen, military officials and other executive staff.

It was a whirlwind visit. Guided by LASL director Norris Bradbury, Kennedy and his team viewed Rover’s progress at the Lab and traveled through the town of Los Alamos. His tour commenced with a stop at the high school’s football field, where the president addressed a crowd of 6,000 onlookers to express gratitude for the LASL’s contributions to national security and scientific developments. Kennedy’s entire stay ran about 100 minutes.

Given the attention and speed the visit required, caffeine was helpful fuel for those involved. A late afternoon coffee break provided a perfect pick-me-up and casual photo opportunity before Kennedy left for the high school. Food service workers Virginia Lyon and Mildred J. Frentzel served the president his coffee in a sunset pink-colored cup on a white saucer while Bradbury grinned and the D.C. and Los Alamos contingents mingled. According to The Boston Globe, Kennedy was known to drink black coffee — no cream, no sugar.

Coffee breaks were a strategic tradition for Kennedy. He knew how to leverage their relaxed familiarity to established commonality and intimacy among the participants. A practicing Catholic, Kennedy understood how rituals reinforced a sense of purpose. Coffee breaks were the secular American ritual of energizing to tackle the next big task — whether it was going to work or landing on the moon.

During his 1952 Senate campaign, Kennedy and the dynamic women in his family staged in-person “Coffee with the Kennedys” events in homes across Massachusetts. The casual kaffeeklatsch, coupled with the family’s aristocratic charm, was an attempt to engage potential women voters. “Coffee with the Kennedys” was later resurrected in 1960 during his presidential campaign, this time as a televised call-in program featuring his glamorous wife, Jacqueline, along with his relatives.

Kennedy’s words at Los Alamos echoed this shift in the nation’s trajectory, and the Lab’s responsibility to lead it. Addressing the high school crowd, Kennedy said, “We want to express our thanks to you. It’s not merely what was done during the days of the second war, but what has been done since then, not only in developing weapons of destruction which, by an irony of fate, help maintain the peace and freedom, but also in medicine and in space, and all the other related fields which can mean so much to mankind if we can maintain the peace and protect our freedom.”

President Kennedy’s coffee cup from his 1962 visit is now a part of the Bradbury Science Museum’s collection. To see archival footage of Kennedy’s visit, watch this video on the BradburySciMuseum YouTube page.