'Service to the nation is still the most important thing' 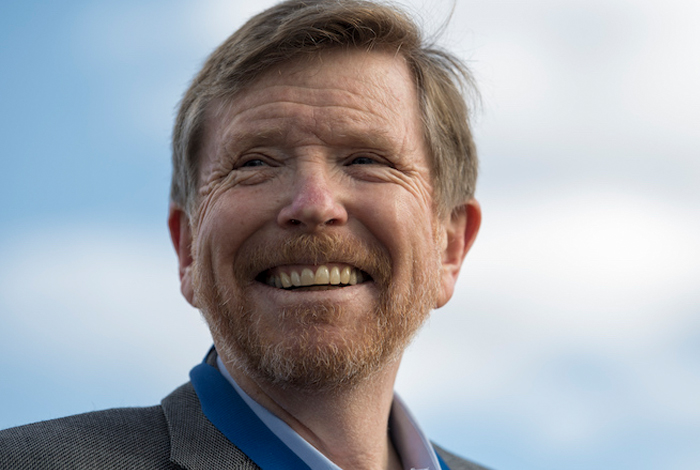 Director Emeritus Terry C. Wallace, Jr. will retire from the Laboratory on June 30.

When you ask Wallace to list the proudest accomplishments of his 18-year career at the Lab, he’ll tell you that he can’t talk about most of them. As someone who spent a majority of his time as the Lab’s senior intelligence executive, much of the work he did was classified.

“But I know we made a huge difference,” he said. “We can’t talk about those accomplishments, but they were critical to our national security. That’s what I’m proudest of.”

Those words ring true for many at the Laboratory whose successes will never be publicly heralded, despite their importance.

“Those times when you’re tasked with an assignment and the clock is ticking and you’re working with a group of people to get the answer right because you know the stakes are high,” said Wallace, “that’s what I’ll miss the most.”

Wallace served as director of the Laboratory in 2018, after Charles McMillan’s retirement and in the final year of Los Alamos National Security’s contract. “It was a challenging time,” Wallace said, “but we kept focused on the mission and didn’t miss a step.”

Laboratory Director Thom Mason applauded Wallace’s contributions to Los Alamos and the scientific community as a whole, saying, “Terry’s distinguished career at Los Alamos is marked by excellent science and thoughtful leadership. His impacts to geosciences, forensic seismology, and our global security programs are significant. I congratulate Terry on his well-deserved retirement; the Laboratory is grateful to him for his many contributions.”

Prior to becoming Laboratory Director, Wallace served as the Lab’s the principal associate director for Global Security (PADGS), leading national security programs such as nonproliferation, counterproliferation and industry partnerships.

“The Laboratory’s first intelligence tasking was in 1944, when Luis Alvarez was asked by the federal government to find out how far along Germany’s nuclear program was,” said Wallace. “That was the first seed of our global security mission. But for years that program was mostly an invisible and somewhat uncoordinated effort.” Wallace worked to change that. “We built a program that was much larger than it had been and was integrated with our national security mission–solidifying it as a robust and critical element of the Lab’s work.”

Nancy Jo Nicholas, associate laboratory director for Global Security and the Laboratory’s first female principal associate director, recalled how fully Wallace threw himself into the global security work of the Lab. “Charlie McMillan named Terry head of Global Security on a Friday and the following Monday, Terry was on a plane to DC to meet with the intelligence community sponsors for Los Alamos,” she said. “Terry was no stranger to IC work, but in his role as PADGS, he became truly passionate about the mission and the amazing things we accomplish—most of which, 99.99 percent of the population will never know about.”

Science at the center

Wallace’s career at Los Alamos also included five years as the principal associate director for Science, Technology and Engineering, leading the implementation of the capability model for scientists and engineers. “I’ve always thought the core creativity of our scientific work is what sets Los Alamos apart,” he said. “The success of the Laboratory is built on intellectual capital.”

It was that tenet that guided Wallace when he developed the science pillars that established the Lab’s institutional investment strategies and continues to broadly influence the Lab’s research priorities.

Wallace himself is an internationally recognized scientific authority on geophysics and forensic seismology, and has evaluated more than 1,700 U.S. and foreign nuclear tests. He has represented Los Alamos and DOE around the world, meeting with scientists and leaders of allied countries and attending significant collaborations with non-NATO countries.

He is one of a few scientists to have a newly discovered mineral named in his honor for his efforts in education, research and service to mineralogy (Terrywallaceite). He is a fellow in the American Geophysical Union and has served on the Board of Earth Sciences & Resources in the National Academy of Sciences. His awards include the Brown Medal, the Langmuir Medal for Research, the Macelwane Medal and the Carnegie Mineralogical Award. He was a distinguished educator at the University of Arizona for 20 years and continues to be a notable author through peer-reviewed journals, science magazines, a college textbook and a blog exploring the nexus of science, running and travel.

Wallace’s roots in Los Alamos and New Mexico run deep. He was raised in Los Alamos and got his undergraduate degree at New Mexico Tech, before moving to Pasadena, Calif., where he earned his Ph.D. from Caltech. His mother represented Los Alamos County in the New Mexico State Legislature for 22 years and his father was a scientist at the Lab. When Wallace was 14, he was asked on an aptitude test what he wanted to be when he grew up. He answered, “The director of Los Alamos.” And so it was.

Given his close connection to the town, it makes sense, then, that he plans to stick around after retirement.

“Los Alamos is a fascinating place,” he said, noting its unique historical roots and how closely tied the town is to the work of the Laboratory, even today. “It’s a powerful part of who I am and I can’t imagine leaving it.”

Wallace and his wife, Michelle Hall, who is also a geophysicist, plan to spend time exploring the interesting geological features of New Mexico and beyond. An avid ultrarunner who has completed more than 50 of races over the last decade, Wallace also plans to continue logging miles on Los Alamos’ broad trail network. When he’s not running or exploring the region’s geology, he looks forward working on several books and flying to St. Louis to visit his son and two (soon-to-be three) grandchildren.

As he reflected on retirement, Wallace noted how proud he was to be part the Laboratory and the Los Alamos community. “The Lab is this incredible resource that touches every part of the nation’s security enterprise,” he said.

But it’s the mission of the Laboratory and the work of its employees in service of that mission that he values the most. “Service to the nation is still the most important thing,” he said. “National security touches every aspect of our lives, and it will continue to. We don’t know exactly how, but it will. When you work in intelligence, you learn how hard it is to predict the future, so I try not to — but I know that the Lab’s future is bright.”