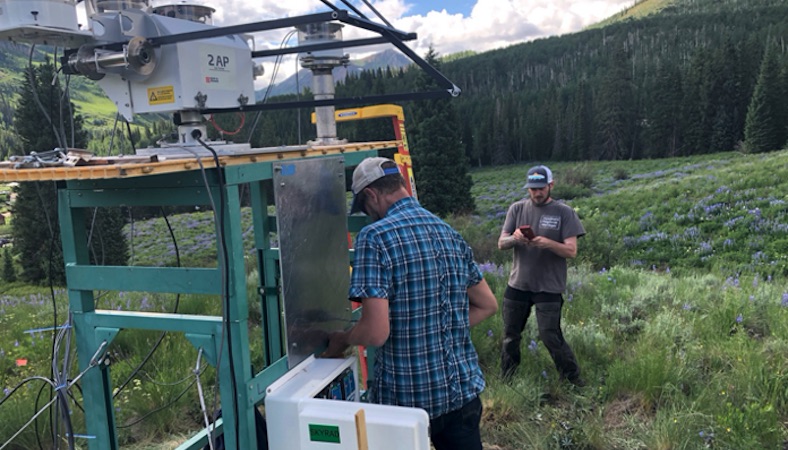 A team from Los Alamos National Laboratory is about to launch research high in the Colorado Rockies that will help demystify water availability and support predictions across the arid West.

Los Alamos is supporting the Department of Energy’s (DOE’s) Atmospheric Radiation Measurement’s (ARM’s) Surface Atmosphere Integrated Field Laboratory (SAIL) campaign that kicks off September 1 near Crested Butte. SAIL will collect data from the East River Watershed in the Upper Colorado River Basin. The Los Alamos team will oversee the SAIL observatory for this period, which ends in June 2023.

Through SAIL, researchers will develop detailed measurements of mountainous water-cycle processes to better predict water resources within the East River Watershed. The Colorado River supplies water for 40 million people and 5.5 million agricultural acres in several Western states, and threats to the future of this supply are poorly understood. The study aims to capture water measurements to predict water retention and flow and reveal how the atmosphere varies across seasons and how mountainous watersheds affected by climate disturbances, such as drought and extreme fires, capture and release water

The Los Alamos team will manage two ARM field sites with advanced instrumentation to bring high-quality observations as a part of SAIL and complement existing surface and subsurface measurements as part of the DOE’s Watershed Function Scientific Focus Area (SFA) in the East River Watershed. On October 1, this team will also launch ARM field research as part of a large collaboration studying pollution at sites in Houston.

The Watershed Function SFA is an ongoing multidisciplinary collaboration of researchers from dozens of institutions. Researchers will

study the processes that influence water availability and quality as a result of earth system change.

This week’s SAIL kickoff media roundtable included Los Alamos National Laboratory Scientist Heath Powers, who manages ARM’s field research facilities and has helped his team deploy and operate them at field sites around the globe. Powers and other participants said that this unprecedented state-of-the-art climate observatory is the key to linking

atmospheric processes such as rain and snowfall over two water-years to the extensive surface hydrology study that the DOE has conducted there over several years.  This will allow scientist to form a complete much more complete understanding of the atmosphere-land hydrological continuum that can be applied to many regions around the world.  The SAIL scientists stated that the data will quantify uncertainties about snowpack to fill massive gaps and improve our ability to forecast water availability.