From climate and cancer solutions to commitment to the mission: Secretary of Energy Granholm ‘visits’ Los Alamos for packed virtual tour 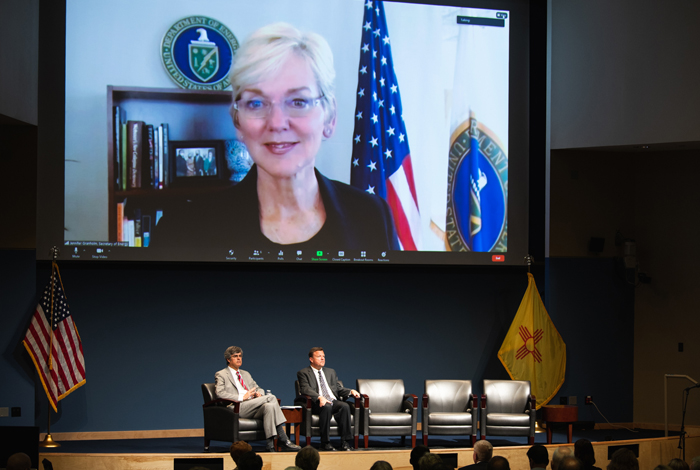 U.S. Secretary of Energy Jennifer Granholm listens via Zoom while Los Alamos leaders kick off a virtual tour of LANL and an audience of vaccinated employees looks on.

Nominated by President Joe Biden and confirmed as a member of his cabinet in February 2021, Granholm is the nation’s 16th energy secretary. Prior to her nomination, Granholm was the first woman elected governor of Michigan, where she served two terms from 2003 to 2011. With a history of pursuing programs that support clean energy, Granholm was particularly interested in the ways the Laboratory supports strategic national interests, including climate solutions.

Nearly 200 vaccinated employees gathered in the Laboratory's National Security Sciences Building auditorium to interact with the Secretary via Zoom. Video of Granholm, who participated from her office in Washington, D.C., was shown on a screen above the stage.

LANL Director Thom Mason said he was honored on behalf of the entire Laboratory to welcome Granholm and have the opportunity to share about programs including plutonium operations, NASA projects, supercomputing work, and more.

“Today you’ll learn about a handful of our programs in areas like nuclear nonproliferation, fundamental science, and R&D,” Mason said. “We hope after this virtual tour, you’ll want to come back in person and get a deeper dive into our work.”

Granholm kicked off the meeting by sharing remarks with the LANL workforce and answering questions. Despite the Zoom setting, she immediately set an easygoing tone, joking, offering support for LANL’s important work, and showing a strong knowledge of the Laboratory’s mission.

“No matter what mission you work on, you are – all of DOE is – America’s ‘solutions department’,” Granholm expressed. “Science is foundational to the success of America, and the national labs are the crown jewels of the institution. President Biden and I aim to treat you like the jewels that you are.”

Granholm’s first stop on her virtual tour of LANL was its Plutonium Facility, which is the heart of the nation’s Plutonium Center of Excellence, a designation NNSA bestowed on Los Alamos in 2009.

The Plutonium Facility, known as PF-4, is the nation’s most modern plutonium science and manufacturing facility, where the Lab work ranges from research and development for the nation's nuclear stockpile to making nuclear power sources for NASA deep space missions.  Deputy Laboratory Director for Weapons Bob Webster introduced the tour with some apropos comparisons to Michigan Stadium, in Granholm's home state, sparking laughter from Granholm and the crowd.

“At about four football fields in size, PF-4 has about the same footprint as Michigan Stadium,” Webster said. “It’s a huge facility, built in 1978 to withstand 200-mile-per-hour winds and seismic events even larger than the magnitude 3.4 earthquake that was recorded in Ann Arbor during a Penn State game!”

Four Lab employees then talked about the Lab's plutonium research and manufacturing capabilities and the science that it enables. Nina Lanza, a planetary scientist, described LANL's role in the Mars mission, one of many NASA space missions fueled by the plutonium power sources developed in part by Los Alamos. She noted that the Lab has helped to develop instruments that are deployed on the rover Perseverance – in particular, SuperCam – and is now conducting research using them.

Frank Gibbs, who serves as senior director of Actinide Operations, closed the PF-4 tour by describing a part on SuperCam called Laser Induced Breakdown Spectroscopy (LIBS), which overlaps both the NASA and NNSA missions and is also being developed for use in the Plutonium Facility.

“LIBS leverages the work the Mars team is doing to analyze metals like plutonium without having to handle them,” Gibbs explained. “It’s not often we get to use a tool that had its early testing done on another planet!”

The next stop on the virtual tour was the New Employee Training Academy building located in downtown Los Alamos. Remodeled in 2020 and opened in 2021, the facility is where the Lab’s newest technicians are trained for mission-specific work at the Plutonium Facility. Deputy Laboratory Director for Operations Kelly Beierschmitt introduced the video tour of the facility and emphasized that the Lab’s greatest asset is its people.

Alongside this new type of onboarding, pipeline programs with New Mexico colleges and universities also support the Lab’s increased staffing needs. Granholm asked: “What’s your elevator pitch to young people who might be interested in working at the Lab?”

“Here in Los Alamos, there’s something for everyone,” said Jackie Valdez, who supports human capital strategy, about the diversity of job opportunities at the Lab. “I was born, raised, and educated in New Mexico, and have 40 years of service in my career – and I’ve stayed because of the mission.”

From Cretaceous research to cancer therapy

Employees from the Los Alamos Neutron Science Center (LANSCE) took the stage next, discussing the research coming out of one of the nation’s most powerful proton linear accelerators.

“One of the more unique applications of [the accelerator] was a 74-million-year-old dinosaur skull that was discovered in 1998,” explained Associate Laboratory Director for Physical Sciences Toni Taylor. “Conventional x-rays couldn’t penetrate the solid rock fossil, so the New Mexico Museum of Natural History brought it to LANSCE. Our neutrons were able to image the skull and lead to fascinating scientific discoveries.”

The team also mentioned the Isotope Production Facility (IPF), which produces radioactive isotopes that are used for an array of scientific, medical, and industrial applications.

“The area of greatest impact has been in the supply of medical isotopes,” said Eva Birnbaum, Isotope program manager. “IPF has been a world-leading supplier of isotopes used for cancer and cardiac imaging. If you’ve ever seen a PET scan indicating tumors – our isotopes can literally make those disappear.”

“You have just blown my mind,” she exclaimed.

Alexandra Jonko, a scientist who works with results from the high-powered processing and data from the supercomputer, explained:

“The modeling I work on helps mitigate the impacts of destructive wildfires. This allows wildland firefighters to learn about fire patterns without having to observe real fires in the field, which is safer and saves time.”

Wildfire modeling is just one example of the variety of climate-related issues for which LANL supercomputers provide research and data – data that often plays a role in U.S. policymaking.

“The question of how climate issues will accelerate seems to be something your lab is uniquely equipped to address,” Granholm said.

Granholm expressed thanks for 'spectacular' tour

As Granholm’s circuit around just a few of the Laboratory’s facilities concluded, she implored the leaders in the room to reach out, share their concerns with her directly, and let her know how she and DOE staff can help. In closing, she expressed gratitude for the visit.

“No one else has done a tour quite like this,” she said, referencing her long schedule of virtual tours to DOE facilities. “Thank you for welcoming me and being so spectacular.”

Afterward, many employees expressed that the Secretary’s encouragement was inspiring, and they thanked her for the time she took to listen and learn about the Laboratory’s national security and other missions.