Study finds neutron stars are typically about 11.75 kilometers in radius, and provides a novel calculation of the Hubble constant 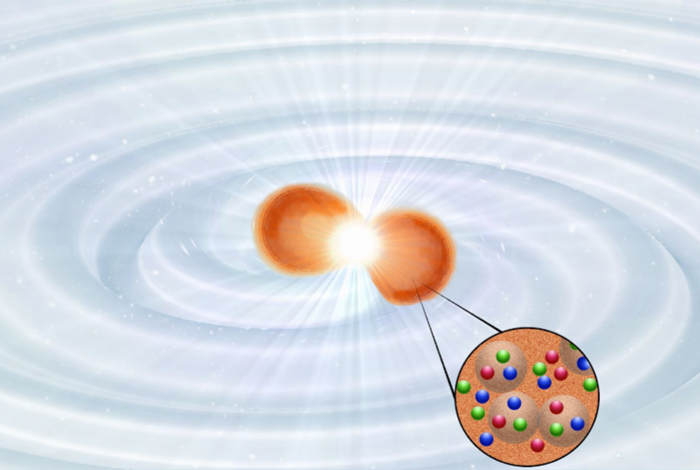 Collision of two neutron stars showing the electromagnetic and gravitational-wave emissions during the merger process. The combined interpretation of multiple messengers allows astrophysicists to understand the internal composition of neutron stars and to reveal the properties of matter under the most extreme conditions in the universe.

LOS ALAMOS, N.M., Dec. 21, 2020—A combination of astrophysical measurements has allowed researchers to put new constraints on the radius of a typical neutron star and provide a novel calculation of the Hubble constant that indicates the rate at which the universe is expanding.

“We studied signals that came from various sources, for example recently observed mergers of neutron stars,” said Ingo Tews, a theorist in Nuclear and Particle Physics, Astrophysics and Cosmology group at Los Alamos National Laboratory, who worked with an international collaboration of researchers on the analysis to appear in the journal Science on December 18. “We jointly analyzed gravitational-wave signals and electromagnetic emissions from the mergers, and combined them with previous mass measurements of pulsars or recent results from NASA’s Neutron Star Interior Composition Explorer. We find that the radius of a typical neutron star is about 11.75 kilometers and the Hubble constant is approximately 66.2 kilometers per second per megaparsec.”

Combining signals to gain insight into distant astrophysical phenomena is known in the field as multi-messenger astronomy. In this case, the researchers’ multi-messenger analysis allowed them to restrict the uncertainty of their estimate of neutron star radii to within 800 meters.

Their novel approach to measuring the Hubble constant contributes to a debate that has arisen from other, competing determinations of the universe’s expansion. Measurements based on observations of exploding stars known as supernovae are currently at odds with those that come from looking at the Cosmic Microwave Background (CMB), which is essentially the left over energy from the Big Bang. The uncertainties in the new multimessenger Hubble calculation are too large to definitively resolve the disagreement, but the measurement is slightly more supportive of the CMB approach.

Tews’ primary scientific role in the study was to provide the input from nuclear theory calculations that are the starting point of the analysis. His seven collaborators on the paper comprise an international team of scientists from Germany, the Netherlands, Sweden, France, and the United States.