An update for an internationally vital sea-ice computer model, called CICE version 6.0, is being released this week, a timely tool that supports more accurate forecasting of ice occurrence and global climate modeling 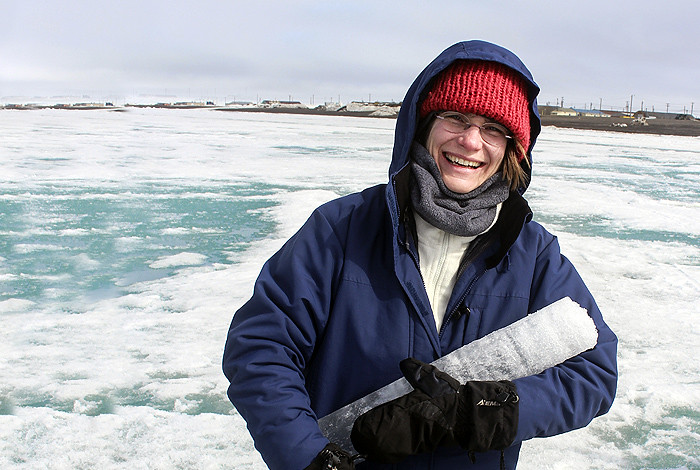 Los Alamos National Laboratory scientist Elizabeth Hunke and her team have released an update to the sea-ice computer model, CICE, that has been a key part of the Arctic predictive capability for the U.S. Navy, the National Oceanic and Atmospheric Association, and the National Ice Center. CICE is also widely used for earth-system research in academic and government institutions worldwide.

“This update improves our ability to understand a type of anchored ice, called land-fast ice, that is attached to the shore or sea bottom and can block shipping lanes and northern ports,” said Elizabeth Hunke, lead developer of the CICE model.   “The polar regions are not desolate, they’re actually alive with shipping, energy development, fishing, hunting, research and military defense operations,” Hunke noted. “Sea ice makes navigation hazardous, as thick ice can block fishing boats and even makes it difficult for U.S. Navy submarines to surface during an emergency. Our model is essential to helping agencies predict the polar sea conditions for developing infrastructure, shipping and transportation plans,” she said. “In addition, the new tool can provide insights into the complex ecosystems of the polar region such as the algae that is essential to some polar creatures.”

The CICE software model was originally developed at Los Alamos in the early 1990s by Hunke and coworkers, helping make sense of the millions of bits of data that stream in from satellites, ships, and on-site researchers as they explore the water, ice and atmosphere of the polar regions. Since then, CICE has been a key part of the predictive capability for the U.S. Navy, the National Oceanic and Atmospheric Association, and the National Ice Center. CICE is also widely used for earth-system research in academic and government institutions worldwide.

As part of CICE version 6.0, a second modular software package of sea-ice-column physics is being released, called Icepack version 1.1. The Icepack software provides the sea-ice community with insights into thermodynamics, biogeochemistry, mechanical ridging and ice thickness, and it can be ported to a variety of computer models at differing agencies.

A town hall discussion on the subject of sea-ice model development across the research community will be held at the upcoming American Geophysical Union conference December 10-14 in Washington, D.C. The focus will be on the value of multi-agency collaboration, led by the interagency, international CICE Consortium, whose mission is to foster collaboration on sea-ice model developments for earth-system research and operational applications. The CICE Consortium is supported through the U.S. Department of Energy Office of Science; U.S. Department of Defense; National Science Foundation; National Oceanic and Atmospheric Administration; and Environment and Climate Change Canada.