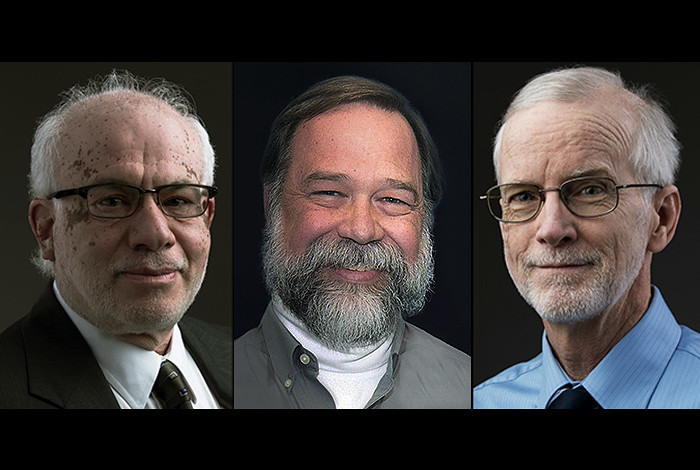 LOS ALAMOS, N.M., Nov. 28, 2018—Los Alamos National Laboratory scientists Manvendra Dubey, David Janecky and Greg Swift were named Fellows of the American Association for the Advancement of Science (AAAS). Election as a Fellow of AAAS is an honor bestowed upon Association members by their peers.

“Becoming an AAAS fellow is a tremendous honor. I want to congratulate Manvendra, David, and Greg on the recognition,” said Laboratory Director Thom Mason. “Their work has made lasting impacts in climate, oceanic and thermoacoustic science, respectively, and embodies how the Laboratory’s national security mission benefits diverse fields of science.”

This year 416 members have been awarded this honor by AAAS because of their scientifically or socially distinguished efforts to advance science or its applications. New Fellows will be presented with an official certificate and a gold and blue (representing science and engineering, respectively) rosette pin on Feb. 16 at the AAAS Fellows Forum during the 2019 AAAS Annual Meeting in Washington, D.C.

As part of the AAAS Section on Atmospheric and Hydrospheric Science, Dubey was elected Fellow for distinguished synergistic laboratory and field studies across scales elucidating fundamental mechanisms driving aerosol and greenhouse-gas warming and facilitating their realistic representation in models.

As part of the AAAS Section on Geology and Geography, Janecky was elected Fellow for pioneering contributions to the field of fluid-rock interactions at high temperatures in deep ocean rift valleys and vents and for distinguished service to scientific organizations.

As part of the AAAS Section on Physics, Swift was elected Fellow for pioneering developments in the science and technology of thermoacoustics, for his influential textbook "Thermoacoustics," and for efforts on behalf of science education in New Mexico.

This year’s AAAS Fellows will be formally announced in the AAAS News & Notes section of the journal Science on Nov. 29, 2018.

The American Association for the Advancement of Science (AAAS) is the world’s largest general scientific society and publisher of the journal Science as well as Science Translational Medicine, Science Signaling, a digital, open-access journal, Science Advances, Science Immunology, and Science Robotics. AAAS was founded in 1848 and includes nearly 250 affiliated societies and academies of science, serving 10 million individuals. Science has the largest paid circulation of any peer-reviewed general science journal in the world. The non-profit AAAS is open to all and fulfills its mission to “advance science and serve society” through initiatives in science policy, international programs, science education, public engagement and more.