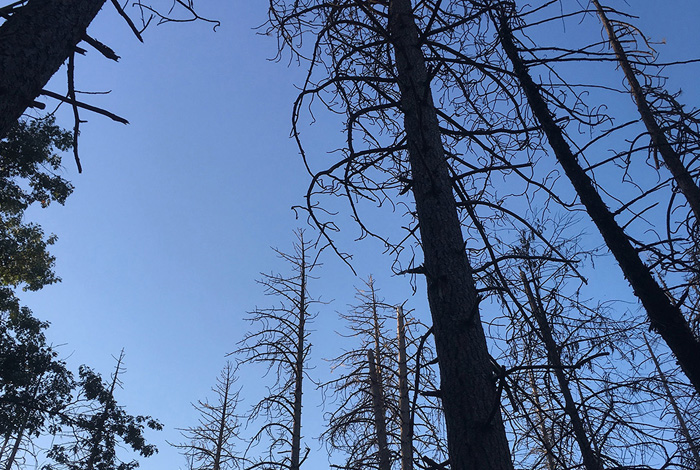 Outbreaks of western pine beetles are decimating ponderosa pines in California’s Sierra Nevada and across the West. A new supercomputer modeling study will help researchers forecast the impact of warming and drought on these forests.

LOS ALAMOS, N.M., Nov. 22, 2021—In California’s Sierra Nevada, western pine beetle infestations amped up by global warming were found to kill 30% more ponderosa pine trees than the beetles do under drought alone. A new supercomputer modeling study hints at the grim prospect of future catastrophic tree die-offs and offers insights for mitigating the combined risk of wildfires and insect outbreaks.

“Forests represent a crucial buffer against warming climate and are often touted as an inexpensive mitigation strategy against climate change,” said Zachary Robbins, a researcher at Los Alamos National Laboratory, graduate student at North Carolina State University, and lead author of the paper on beetles and ponderosa pine tree die-offs. “Our research shows that warming shortens the time between beetle generations, supercharging beetle population growth. That can then spur catastrophic mortality in forest systems during drought in the Sierra Nevada and throughout the Western United States.”

In the recently published study in Global Change Biology, Robbins and his collaborators developed a new modeling framework to assess the risk western pine beetles, or bark beetles, pose in many forest ecosystems under climate change. If the effects of compromised tree defenses (15% to 20%) and increased bark beetle populations (20%) are additive, the team determined that 35% to 40% more ponderosa pines would die from beetle attacks for each degree Celsius of warming.

“Our study is the first to attribute a level of tree mortality to the direct effect of warming on bark beetles, using a model that captures both beetle reproduction and development rates and host stress,” Robbins said. “We found that even slight increases in the number of annual generations of bark beetles due to warming can significantly increase tree mortality during drought.”

Using Los Alamos supercomputers, the team modeled bark beetle dynamics and tree die-off during the extreme drought of 2012-2015 and earlier periods. Then they investigated those results using field observations of maximum and minimum temperature, precipitation, tree density, tree mortality, and beetle flight initiation (when fully developed beetles leave their tree of origin) along with lab studies on beetle rate of development.

They found that a quicker rate of producing new generations of off-spring contributed more to killer infestations than did surviving the winter in the absence of cold temperatures fatal to the beetle, yet, surprisingly, the increase in the number of generations was not very big.

“In the Sierra, we saw only about one-third more generations per year, but that really amplified mortality,” Robbins said. “It shows that a small impact in the success of these populations can have a big impact on tree mortality, where we previously thought the beetle needed one whole generation increase to substantially impact mortality.

“These findings should generally apply to many species of pine forests around the West, although the beetle species might be different,” said Chonggang Xu, coauthor of the paper. A senior scientist at Los Alamos, Xu simulates forest-vegetation dynamics in his research.

“Beetle-instigated die-off may cause forests to act as carbon sources to the atmosphere for decades,” Xu said. “Dead trees don’t absorb CO2 but release carbon to the atmosphere. This could potentially raise global forecasts of atmospheric carbon, which has not yet been explicitly considered in current-generation earth-system models.”

The research has also implications for forest management under climate change.

“A mechanistic understanding of the interactions among climate, forests, and disturbances can improve the planning of forest management actions and better predict the effects of climate change on biological systems,” Robbins said.

“A diverse forest that combines small and big trees and species diversity, as well, is more resilient,” Xu said. He pointed out that forest management to minimize wildfire risk often removes the smaller trees and preserves the larger ones, “which creates a forest of big trees. Then the beetle comes and the trees could be devastated at the same time.”

Bark beetles kill trees worldwide by chewing through bark and depositing their larvae in the inner bark. An increasing number of beetle outbreaks in the past two decades have devastated forests across the American West, including New Mexico, striking nearly 11 million acres nationwide and threatening the basic structure and ecological processes of some forests.

The beetles exploit the warming, drying climate in the West. When precipitation and temperature remain at historic levels, trees can defend themselves from infestation, but drought often sparks bark beetle outbreaks. That is because water-stressed trees suppress their photosynthesis, close their stoma, and grow more slowly, depleting their carbon storage, which may weaken their defenses.

The life-cycle of the beetle depends on temperature under the bark and in the air. Warmer temperatures reduce the number of beetles killed off by deep winter cold and accelerate and extend the breeding season. Outbreaks finally collapse when bark beetles exhaust the supply of susceptible trees, acutely cold temperatures kill off the beetles, or predators and parasites decimate bark beetle populations.

The study considered historic and contemporary temperature trends in a broad swath of the Sierra Nevada, including several national forests and Kings Canyon, Sequoia, and Yosemite National Parks.

In a new approach, the team used a model of the breeding cycles and population dynamics of bark beetles. The team incorporated this model into a tree-death and insect-attack model, which accounts for the number of bark beetles in flight, the number and size of trees available as hosts, and the drought. The models were validated against data from field observations.