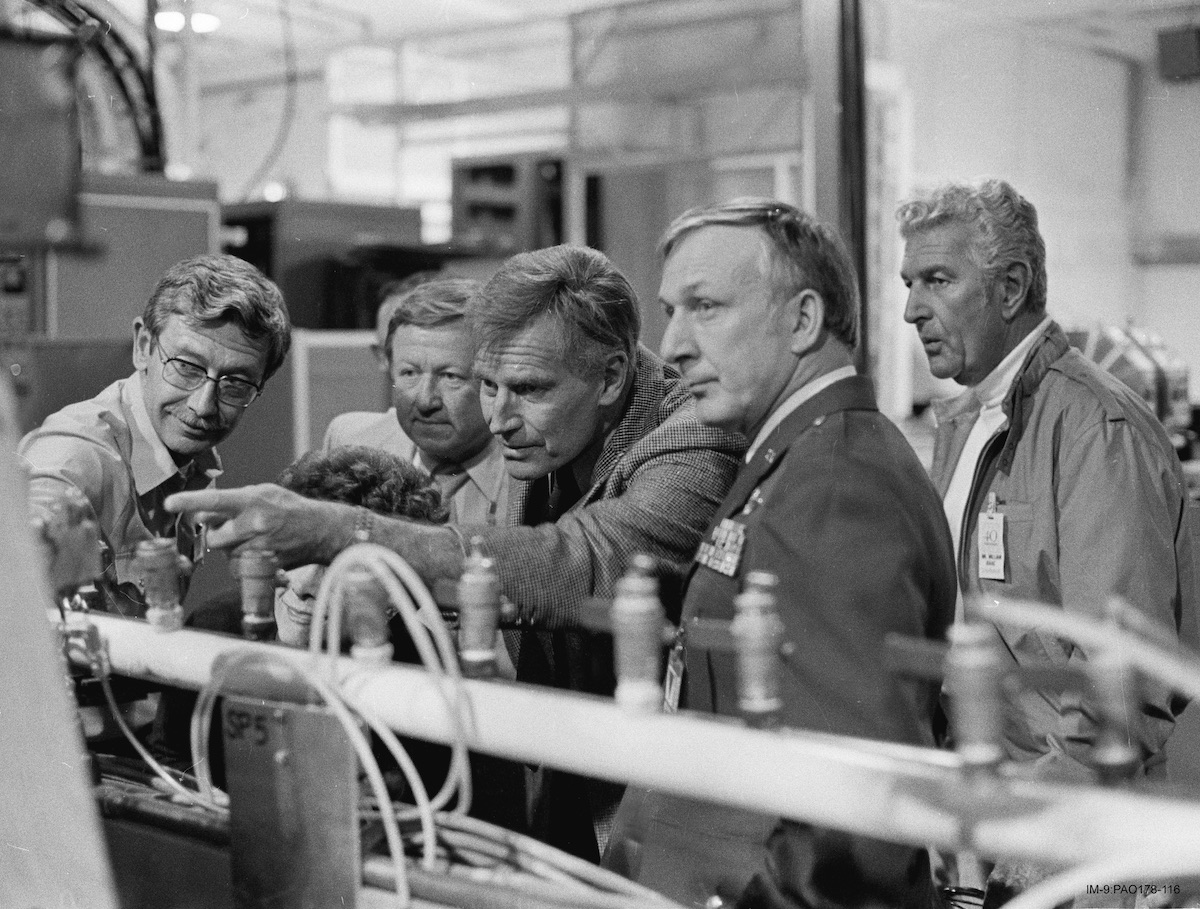 Charlton Heston (center) during a visit to Los Alamos in the 1980s. Heston, a U.S. Air Force veteran and an Academy Award winning actor, narrated films for the Lab after receiving his Q clearance in 1983.

Charlton Heston was one of the greats of American film, appearing in nearly 100 movies beginning in the 1950s. He was most known for his roles as Moses in Cecil DeMille’s “The Ten Commandments” and as the title character in “Ben-Hur,” for which he won an Academy Award.

Heston also starred in a few films for much smaller audiences, such as “Trust, But Verify” (1989) and “Project White Horse” (1984). Heston narrated these once-classified Lab films, which are now part of the collections of the National Security Research Center. The NSRC is the Lab’s classified library and also houses unclassified legacy materials related to Los Alamos history.

How did a Hollywood star get a gig at the Lab?

In the early 1980s, the head of the Lab’s film group, Charles Barnett, was disappointed in the quality of narration in recent Lab films. One of Barnett’s colleagues jokingly suggested that the Lab should get Heston to narrate. Unbelievably, Barnett was an old friend of Heston’s and, to Barnett’s surprise, Heston agreed on the condition that he not be paid for his work. In 1983, Heston was granted a Q clearance and narrated several classified films.

These once-classified films that Heston narrated are now publicly available:

Before becoming an actor, Staff Sgt. Heston was a gunner in the Air Force during World War II. Heston was stationed in the Pacific and was set to take part in Operation Coronet — the planned invasion of Japan. The end of WWII arrived before Coronet did, but if it had taken place, Heston reasoned, his own fate may have turned out differently.

On one of Heston’s trips to Los Alamos, he was given a piece of trinitite — a glassy substance formed as heat from the 1945 Trinity test fused the desert sand. Recalling this later in a speech, Heston said, “I took it home and gave it to my son … because it occurred to me that it was, in a very real sense, his birthstone.”

Heston’s affiliation with the Lab is part of an enduring partnership with the U.S. military, which began with the Lab’s inception in 1943. Gen. Leslie Groves was the leader of the Manhattan Project. The then-secret Lab in Los Alamos was staffed by military members, notably the Special Engineer District and the Women’s Army Corps, who worked side by side with civilian staff to develop two types of nuclear weapons in just 27 months.

More fascinating stories, photos and videos related to the Lab’s earliest days and beyond are here.