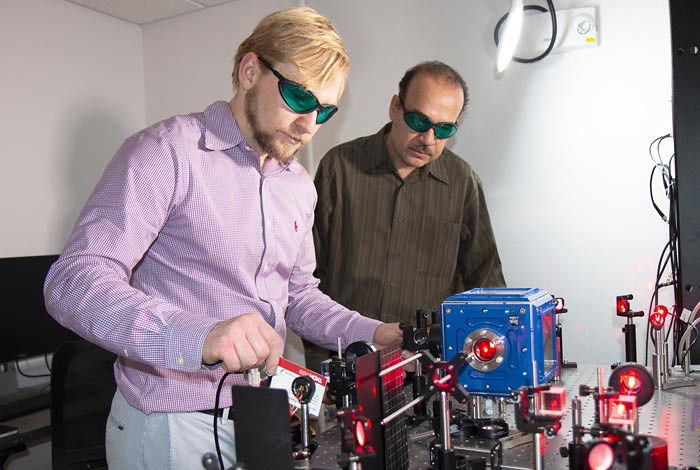 “Our idea relies on trapping a particle using ‘optical tweezers,’ a technique which is the subject of this year’s Nobel prize in Physics,” said Alonso Castro of the Lab’s Actinide Analytical Chemistry group, one of the authors of a new paper in the journal Physical Review A. “It is only fitting that [Nobel prize winner] Arthur Ashkin’s invention is still yielding novel science even after 30 years.”

The team’s work shows that, for micrometer and sub-micrometer particles, the kinetic energy of the emitted nuclear particle, or daughter particle, can be determined very accurately by measuring the recoil of the sample particle levitated in a laser-powered optical trap. The sample particle fully absorbs the recoil momentum of the daughter atom resulting in a well-defined oscillation in the harmonic potential of the trap.

“For applications such as nuclear forensic analysis, this technique could have significant value. Thus far, we have been able to hold uranium particles in optical traps, and we find that holding them in place, with their oscillation energy ‘cooled,’ gives us the opportunity to see the recoil when the daughter atom’s motion causes displacement of the sample,” said Castro.

“The next step would be to measure those displacements and then calculate the energy of the recoil. The impact of our approach is that it can very quickly determine the isotopic composition of the types of nanometer and micrometer-sized particles found in nuclear forensic scenarios,” he said.

Nuclear forensics is the examination of nuclear and other radioactive materials to determine the origin and history of the materials in the context of law enforcement investigations or the assessment of nuclear security vulnerabilities. Los Alamos conducts a wide range of nuclear forensic science in support of the Laboratory’s national security mission.