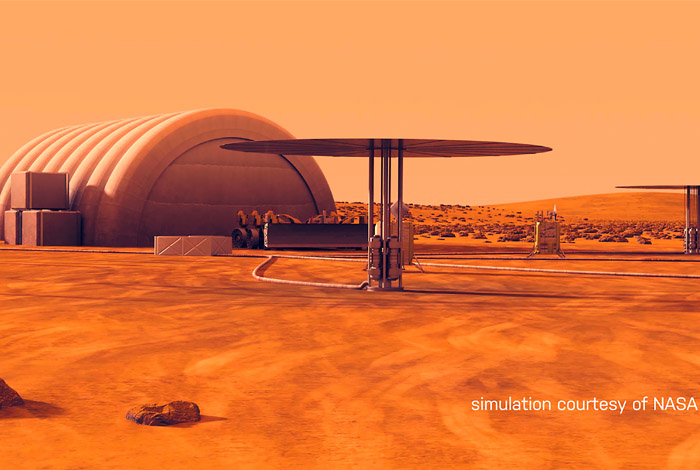 A NASA artist’s rendering of Kilopower reactors powering a human habitat on Mars.

LOS ALAMOS, N.M., Nov. 2, 2020—A new agreement hopes to speed along a nuclear reactor technology that could be used to fuel deep-space exploration and possibly power human habitats on the Moon or Mars. Los Alamos National Laboratory has signed an agreement to license the “Kilopower” space reactor technology to Space Nuclear Power Corporation(SpaceNukes), also based in Los Alamos, NM.

“We developed this technology at the Laboratory in partnership with NASA and the National Nuclear Security Administration,” said Patrick McClure, who served as project lead for Kilopower at Los Alamos and is now a partner in SpaceNukes. “By creating our own company, we’re hoping to be able to reach potential new sponsors who will want to take this technology to the next level and put it into space.”

​Kilopower is a small, lightweight fission power system capable of providing various ranges of power depending on the need. For example, SpaceNukes offers low-kilowatt reactors to power deep space missions, middle-range reactors in the tens of kilowatts to power a lunar or martian habitat, and much larger reactors in the hundreds of kilowatts that could make enough propellant for a rocket to return to Earth after a stay on Mars.

“We think that nuclear power is needed for humans to exist and thrive in outer space, and we’ll go wherever we’re needed to make that happen,” said Dave Poston, who designed the reactor at Los Alamos and is another partner in SpaceNukes, which is named after his softball team since 1997. “This licensing agreement demonstrates how tech-transfer should work: the government and national laboratories invest in technologies that are unproven and advance them far enough to make them commercially viable.”

Jerome Garcia, acting deputy division leader for the Laboratory’s Feynman Center for Innovation, added, “Commercialization of technology is a key mission of Los Alamos National Laboratory, and this license exemplifies its wide-ranging benefits. Not only does it create a new private company right here in New Mexico that will add to the vibrancy of our local economy, but the technology is based on the Laboratory’s unique nuclear capability. This is a win for SpaceNukes, Los Alamos, and the State.”

SpaceNukes is pursuing opportunities with NASA for a lunar surface reactor and have presented their ideas to the U.S. Air Force and Space Force for reactor concepts for cislunar space. “We believe our team, through NASA’s private enterprise initiatives, can deliver abundant reliable power for space missions faster and at a much lower cost,” said Poston.

Poston and McClure are listed as the inventors on the patent that forms the basis of the licensing agreement. They are led by Andy Phelps, a long-time Bechtel executive and former Los Alamos National Laboratory associate director. Their goal is to commercialize the Kilopower technology and see a reactor in space in the next few years.