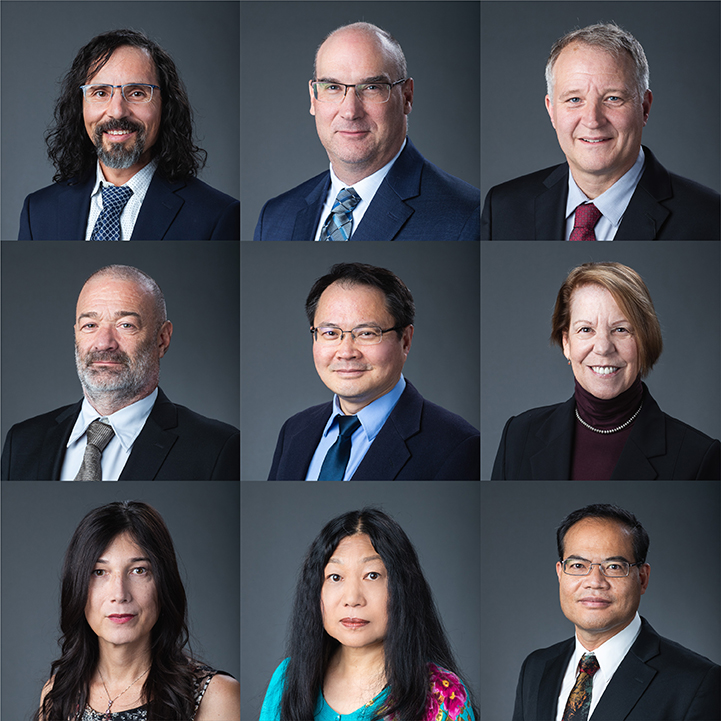 “These nine researchers are some of the best minds in their fields and it is an honor to recognize them as Laboratory Fellows,” said Thom Mason, Laboratory director. “I congratulate each of them on their high-level achievements that continue to support the Laboratory’s mission and the larger scientific community.”

David Chavez of the High Explosives Science and Technology group was named a fellow for his pioneering physical insights into synthetic organic chemistry for energetic materials, his innovations in the development of new explosives and his unwavering commitment to high-level intellectual achievements. Chavez plays a pivotal role in providing critical leadership in the energetic materials field for the nuclear weapons program and the broader defense and national security communities.

Tim Germann of the Physics and Chemistry of Materials group was selected for his distinguished career at the Laboratory, making seminal scientific contributions in a number of computational areas and serving in a number of leadership roles at Los Alamos and nationally. Germann is an internationally recognized authority for three main bodies of work: computational materials science, computational epidemiology and computational co-design.

Neil Harrison of the National High Magnetic Field Laboratory is an internationally recognized leader in the broad field of condensed-matter physics. He was named a fellow for his pioneering work on the use of very strong magnetic fields to unravel the electronic structure of strongly correlated materials, most notably high-temperature superconductors, and for his discovery of the importance of electronic entropy in the phase stabilization of plutonium.

Ricardo Lebensohn of the Fluid Dynamics and Solid Mechanics group was named a fellow for his impact and recognition in the field of microstructure and property relationships of polycrystalline materials. His ideas and computational approaches drive the field and influence virtually everyone performing microstructure-aware computational modeling of polycrystalline materials. Lebensohn has had a tremendous impact on the Laboratory’s mission and is recognized as an international authority by both the Laboratory and external scientific communities.

Hui Li of the Nuclear and Particle Physics, Astrophysics and Cosmology group was selected as a fellow for major discoveries in the field of plasma astrophysics. He is recognized as the main person to discover and fully explain Rossby wave instabilities and their role in transporting angular momentum in proto-stellar and protoplanetary disks, one of the most important physics issues in stellar and planetary formation.

Babetta Marrone of the Microbial and Biome Sciences group was named a fellow for her high-level scientific achievement in the fields of bioenergy and biosecurity. Marrone has made numerous contributions to basic and applied research that impact the Laboratory’s national security programs in bioforensics and bioeconomy research. She is a recognized authority in biosciences and has served in national-level positions and on committees in related fields.

Karissa Sanbonmatsu of the Theoretical Biology and Biophysics group was named a fellow for her contributions to the development of large-scale computational models of biomolecular machines. Sanbonmatsu’s cutting-edge work in furthering biological understanding through computational methods has been implemented on the most advanced high-performance computing platforms. Her pioneering work demonstrates and reinforces the profound scientific contributions of advanced computational methods and platforms in tackling complex, multi-scale numerical problems.

Lin Yin of the Laboratory’s Plasma Theory and Applications group is one of the world’s foremost experts on the physics of laser plasma interactions. She was named a fellow for her important discoveries in the physics of laser scattering and energy coupling in inertial confinement fusion experiments on major laser facilities for the weapons program. She has also made groundbreaking discoveries in laser-driven ion acceleration using high-intensity short-pulse lasers, which have applications in society and national security.

Jianxin Zhu of the Physics of Condensed Matter and Complex Systems group at Los Alamos was selected as a fellow for his distinguished career using theory and computation to advance our understanding of the physics and electronic structure underlying strongly correlated materials, quantum materials, functional materials and actinides. These materials are at the center of current scientific research, with applications in energy security, nanotechnology, and platforms for quantum computing.