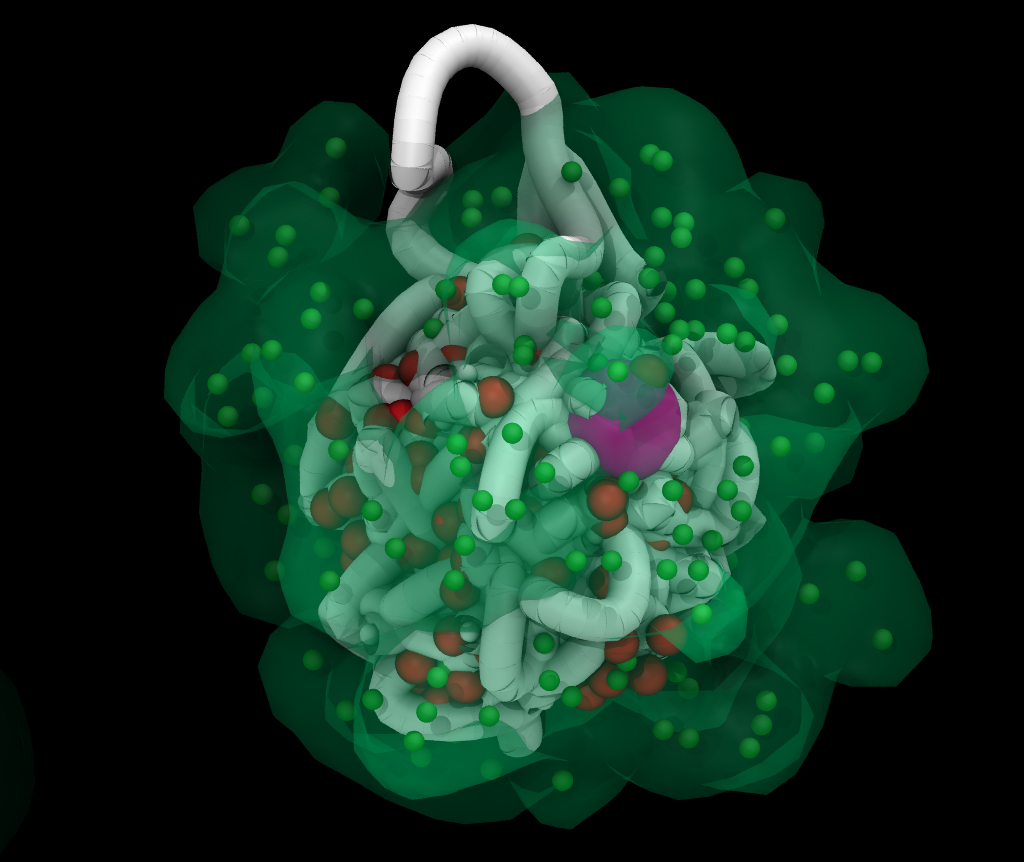 RNA particles swarm an X chromosome from a mouse in a new visualization of X chromosome inactivation by Los Alamos National Laboratory.

LOS ALAMOS, N.M., Oct. 14, 2021—Using supercomputer-driven dynamic modeling based on experimental data, researchers can now probe the process that turns off one X chromosome in female mammal embryos. This new capability is helping biologists understand the role of RNA and the chromosome’s structure in the X inactivation process, leading to a deeper understanding of gene expression and opening new pathways to drug treatments for gene-based disorders and diseases.

“This is the first time we’ve been able to model all the RNA spreading around the chromosome and shutting it down,” said Anna Lappala, a visiting scientist at Los Alamos National Laboratory and a polymer physicist at Massachusetts General Hospital and the Harvard Department of Molecular Biology. Lappala is first author of the paper published Oct. 13 in the Proceedings of the National Academy of Sciences. “From experimental data alone, which is 2D and static, you don’t have the resolution to see a whole chromosome at this level of detail. With this modeling, we can see the processes regulating gene expression, and the modeling is grounded in 2D experimental data from our collaborators at Massachusetts General Hospital and Harvard.”

The model—considered 4D because it shows motion, including time as the fourth dimension—runs on Los Alamos supercomputers. The model also incorporates experimental data from mice genomes obtained through a molecular method called 4DHiC. The combined molecular and computational methodology is a first.

“The method allows us to develop an interactive model of this epigenetic process,” said Jeannie T. Lee, professor of Genetics at Harvard Medical School and vice chair in molecular biology at Massachusetts General Hospital, whose lab contributed the experimental data underpinning the model.

Epigenetics is the study of changes in gene expression and heritable traits that don’t involve mutations in the genome.

“What’s been missing in the field is some way for a user who’s not computationally savvy to go interactively into a chromosome,” Lee said. She compared using the Los Alamos model to using Google Earth, where “you can zoom into any location on an X chromosome, pick your favorite gene, see the other genes around it, and see how they interact.” That capability could lend insight into how diseases spread, for instance, she said.

Based on the work in this paper, Los Alamos is currently developing a Google Earth-style browser where any scientist can upload their genomic data and view it dynamically in 3D at various magnifications, said Karissa Sanbonmatsu, a structural biologist at Los Alamos National Laboratory, corresponding author of the paper, and a project leader in developing the computational method.

In mammals, a female embryo is conceived with two X chromosomes, one inherited from each parent. X inactivation shuts off the chromosome, a crucial step for the embryo to survive, and variations in X inactivation can trigger a variety of developmental disorders.

The new Los Alamos model will facilitate a deeper understanding of gene expression and related problems, which could lead to pharmacological treatments for various gene-based diseases and disorders, Lee said.

“Our main goal was to see the chromosome change its shape and to see gene-expression levels over time,” said Sanbonmatsu.

To understand how genes are turned on and off, Sanbonmatsu said, “it really helps to know the structure of the chromosome. The hypothesis is that a compacted, tightly structured chromosome tends to turn off genes, but there are not a lot of smoking guns about this. By modeling 3D structures in motion, we can get closer to the relationship between structural compaction and turning off genes.”

Lee likened the chromosome’s structure to origami. A complicated shape akin to an origami crane offers lots of surface for gene expression and might be biologically preferred to remain active.

The model shows a variety of substructures in the chromosome. When it is shut down, “it’s a piecemeal process in which some substructures are kept but some are dissolved,” Sanbonmatsu said. “We see beginning, intermediate, and end stages, through a gradual transition. That’s important for epigenetics because it’s the first time we have been able to analyze the detailed structural transition in an epigenetic change.”

In another insight from the modeling, “As the chromosome goes from an active X, when it’s still fairly large, to a compact inactive X, that’s smaller, we notice there’s a core of the chromosome that’s extremely dense, but the surface is much less dense. We see a lot more motion on the surface too,” Lappala said. “Then there’s an intermediate region that’s not too fast or slow, where the chromosome can rearrange.”

An inactive X can activate later in a process called age-related activation of inactive X. “It’s associated with problems in blood cells in particular that are known to cause autoimmunity,” Lee said. “Some research is trying pharmacologically to activate the inactive X to treat neurological disorders in children by giving them something back that’s missing on their active X chromosome. For instance, a child could have a mutation that can cause disease. We think if we can reactivate the normal copy on the inactive X, then we would have an epigenetic treatment for that mutation.”