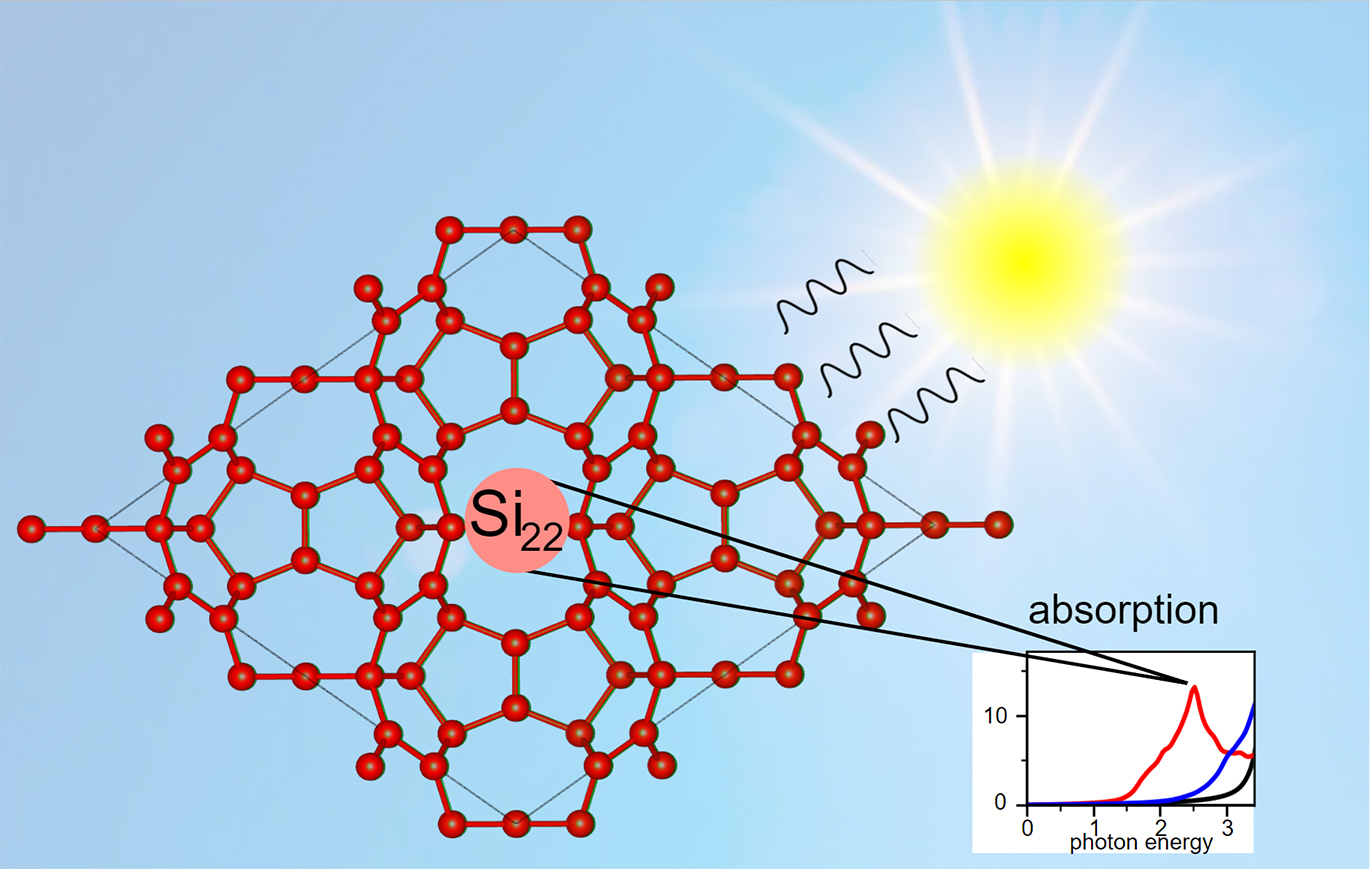 Pentagon-rich silicon allotrope Si22 is predicted to surpass the sunlight absorption capability of traditional silicon. Clean energy production would benefit from the integration of Si22 as the fundamental block in a next generation of solar cells.

Despite the large amount of new materials discovered in the last decades, silicon (Si) remains as the element of choice to design commercial solar panels. Abundant and relatively inexpensive, well-understood as a semiconductor material, and with an established production process, silicon is the building block of many important electronics, including solar cell technology. For all its usefulness, though, silicon remains a relatively poor absorber of sunlight.

As described in a paper recently published in the journal Nano Letters, Los Alamos National Laboratory researcher Alejandro Lopez-Bezanilla and research collaborator Peter Littlewood (Argonne/UChicago) predict and provide theoretical insight into the electronic, mechanical, and optical properties of Si22, a new material composed of only Si atoms arranged in a pentagonal geometry. This Si allotrope shows promise for excellent photovoltaic performance, critical to solar cell technologies, and may also have important applications in areas such as carbon sequestration and quantum computing.

“We’re studying how to improve the use of solar radiation by innovating in new materials,” said Lopez-Bezanilla. “The model material, silicon, is potentially improved with this allotrope. This is the kind of brick you want to start building a solar cell.”

It’s all about the band gap

Target properties in semiconductor research include electronic gap width (or band gap) and peak of absorption of photon energy, which is in part determined by the band gap width. A band gap is a fundamental feature of a semiconductor such as silicon that determines how much energy is required to excite one electron from its current energy level to a higher energy level where the electron can move freely. A semiconductor is transparent to sunlight unless the energy of the incident photon is the right amount to bridge its gap.

A semiconductor integrating a solar cell with a small band-gap can absorb light but produces a low voltage. A too large band-gap yields a high voltage but a small electron flow because only a small amount of solar radiation is harvested. There is an optimal band-gap that meets the right balance, and is the goal of scientists to find materials meeting that property.

“If you have energy from the sun impacting the electrons, and making them jump, but there is no available energy level, you have nothing,” said Lopez-Bezanilla. “The new Si allotrope is able to maximize the absorption of sunlight due to the appropriate position of electronic energy levels defining its band gap.”

The research by Lopez-Bezanilla and Littlewood also focuses on the creation of magnetic moments. When hydrogen (H) is introduced into Si22 cages, the electron orbitals impacted are very localized nearby the foreign atom. That is, the magnetic moment created is not distributed widely throughout the atomic structure, but concentrated and protected from the surrounding environment. This protection can have implications at very low temperatures vis-à-vis its utilization in quantum computing.

Lopez-Bezanilla analyzed the phonon modes of the new material—the way the structure vibrates, a key indicator of structural stability. In Si22, at very low temperatures the type of Si atoms H attaches to slightly vibrate while the surrounding atoms are not mobile. The stability could provide an advantage for quantum computing, where the infrastructure operates at very low temperature to reduce vibration that interferes with computing processes.

The allotrope Si22 also has potential for carbon sequestration. With its hollow structure, Si22 could allow for molecules to be incorporated within the compound. That approach could enable carbon dioxide to be sequestered (removed from the atmosphere) and caged inside the structure. Reducing the amount of carbon dioxide in the atmosphere may mitigate global climate change.

“We proved that the properties are there,” said Lopez-Bezanilla. “It’s possible to have a form of silicon with the properties the solar cell industry needs.”