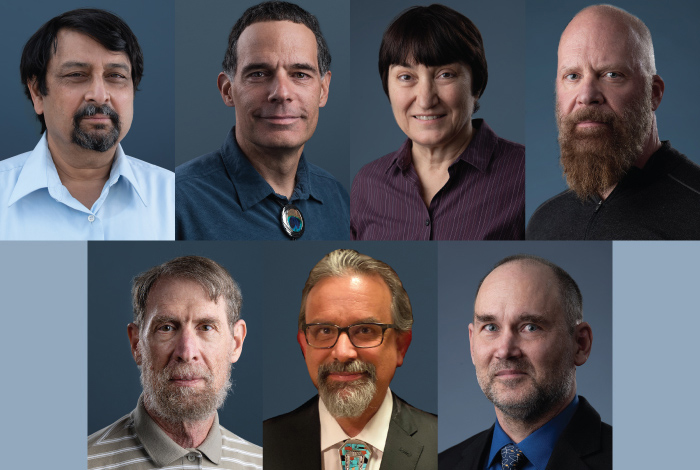 Tanmoy Bhattacharya, of Los Alamos National Laboratory’s Nuclear and Particle Physics, Astrophysics and Cosmology group, works in the fields of Lattice Quantum Chromodynamics (QCD) for high-energy and nuclear physics, fundamentals of quantum mechanics, quantum computation, computational approaches to evolutionary biology and linguistics, data science, machine learning and vaccine development. Bhattacharya has sustained high-level intellectual achievements in programs of importance to the Laboratory; made fundamental, important discoveries that have been widely employed; and become a recognized authority nationally and internationally in the fields of lattice QCD, evolutionary linguistics and computational biology.

Christopher Fontes, of the Materials and Physical Data group at Los Alamos, is an expert in relativistic atomic physics. He is a developer of the Los Alamos suite of atomic codes, which is considered to be a theoretical benchmark capability for plasma emission modeling. Fontes has sustained a high level of achievement and leadership in atomic and plasma physics. He is a Fellow of the American Physical Society and has made pioneering contributions to the understanding of atomic processes in plasmas and their application to a broad range of physics problems including nuclear fusion, laboratory experiment and astrophysics.

Vania Jordanova, of the Lab’s Space Science and Applications group, is an expert in space physics and space weather, which refers to the adverse impact of the dynamic space environment on human technological systems. Jordanova is a recognized international authority on geomagnetic storms, when vast amounts of energy is transferred from the solar wind into the near-Earth space environment (the magnetosphere). Specifically, Jordanova has developed or led the development of state-of-the-art models of the complex interplay between charged particles and the Earth’s magnetic field.

Thomas Leitner, of the Laboratory’s Theoretical Biology and Biophysics group, is an expert in phylodynamics, the study of how epidemiological, immunological and evolutionary processes act and interact to shape viral phylogenies. Leitner is recognized for his contributions to the development of the field of phylodynamics, his pioneering work on exploiting phylogenetics to trace HIV evolution and epidemiology and the application of evolutionary biology to forensics. His work is recognized internationally, which has helped him attract many superb postdoctoral fellows to Los Alamos who are now directly contributing to the Laboratory’s mission.

John Lestone, of Los Alamos’ Radiation Transport Applications group, is a leading weapon neutronics expert. Lestone has had a substantial impact on many areas of weapons physics, including his highly impactful weapons research contributions that have advanced new neutron-diagnosed subcritical experiments and allowed the laboratory to exploit data from historic Nevada neutron experiments. Lestone’s research that determined the prompt fission neutron spectrum to unprecedented accuracy is an important discovery that has led to widespread use.

Joseph Martz, of the Laboratory’s Materials Science and Technology division, is an expert in plutonium chemistry and weapon materials. Martz’s accomplishments include the development of a plutonium pyrophoricity model and codevelopment of the ARIES weapon dismantlement concept. Martz researched plutonium storage degradation and authored the first Department of Energy plutonium storage standard. Martz proposed the plutonium aging program at the Lab, making critical contributions in understanding pit lifetimes. Martz was the Laboratory's head for the Reliable Replacement Warhead competition and is a popular speaker on nuclear weapon history, testing, design and policy. He was selected the inaugural William J. Perry fellow at Stanford University in 2009.

Ralph Menikoff, of Los Alamos’ Physics and Chemistry of Materials group, is an expert in high explosives (HE) and shock physics. Menikoff’s career at the Laboratory has spanned over four decades marked by vital contributions to shock physics and HE science, as well as his leadership in the formulation, implementation and close user support of HE burn models at the core of the Laboratory’s mission. Menikoff has been a primary developer of the Scaled Uniform Reactive Front (SURF) model and its successor, SURF-plus, which have become cornerstones of the Lab’s approach to HE burn modeling.