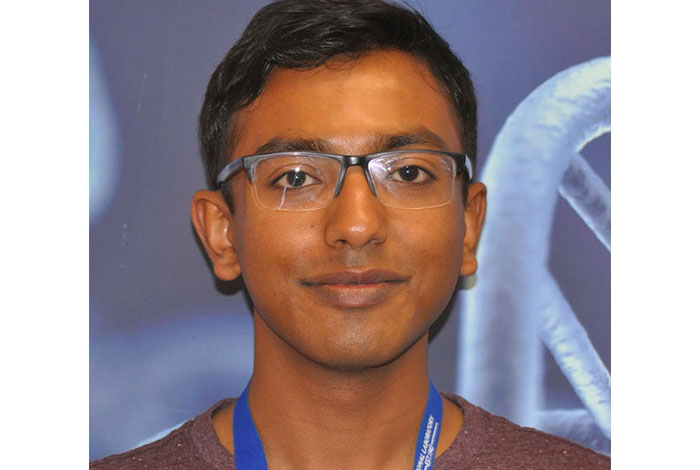 Sumantra Sarkar, winner of the APS Irwin Oppenheim prize for his research into self-replicating materials.

“Self-replication is a biophysical process through which an object can create a near identical replica of itself,” said honoree Sumantra Sarkar. “Biological systems such as all animals and plants are master self-replicators. As I write, millions of cells in our bodies are copying themselves and producing nearly identical replicas. In the awarded work, I developed a theoretical model of self-replicators, which I used to provide several guidelines for designing artificial self-replicators. That work is now helping scientists design experiments to build artificial cells or to understand the origin of life.”

“I first learned about this outstanding work when Sumantra came for his interview,” said Angel E. Garcia, director of the Center for Nonlinear Studies at Los Alamos. “We were all very impressed by the maturity and beauty of this work, and, obviously, offered him the position at CNLS.”

Sarkar has been a postdoctoral fellow at the Center for Nonlinear Studies at Los Alamos since July 2018, where he investigates the biophysics of cell signaling using tools from chemical physics, statistical physics and soft condensed matter physics.

Sarkar earned a Bachelor of Technology in engineering physics with honors in physics from IIT Bombay in 2011 and a Ph.D. in physics from Brandeis University in 2016. At Brandeis he investigated the origin of jamming transition in granular materials. He followed his tenure at Brandeis with a postdoctoral position at the Massachusetts Institute of Technology, where he discovered key results in the theory of complex chemical networks that led to the award-winning work on the design of artificial self-replicators.

The American Physical Society’s 2021 Irwin Oppenheim Award recognizes outstanding contributions to physics by early career scientists who publish in Physical Review E (PRE). The citation that will appear on the certificate is: “For developing a theory of the emergence of self-replication in simple chemical models, and the definition of general design principles for constructing self-replicating objects.”