Ancient oasis once existed on Mars 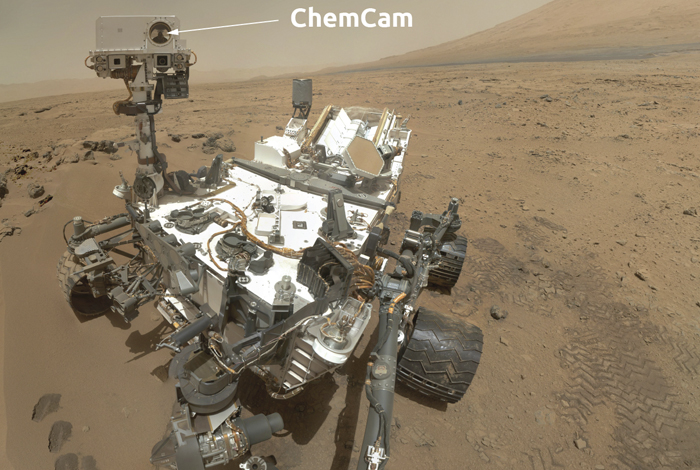 The ChemCam—short for “chemistry” and “camera”—sits atop NASA’s Mars Curiosity rover. It shoots a laser at Martian rocks to analyze their chemical make-up, which gives researchers clues into the planet’s past habitability. The instrument was developed at Los Alamos National Laboratory in conjunction with the French space agency. CREDIT: NASA/JPL-Caltech

LOS ALAMOS, N.M., Oct. 7, 2019—The surface of Mars was once home to shallow, salty ponds that went through episodes of overflow and drying, according to a paper published today in Nature Geoscience. These findings result from an analysis of rocks enriched in mineral salts in Gale Crater, a 100-mile-wide dry lakebed, performed with the ChemCam instrument, which sits atop NASA’s Curiosity rover and shoots Martian rocks with a laser to determine their chemical make-up.

“We’ve learned over the years of Curiosity’s traverse across Gale Crater that Mars’ climate was habitable once, long ago,” said Roger Wiens, the principal investigator of the ChemCam instrument at Los Alamos National Laboratory and a co-author of the paper. “What these new findings show is that the climate on Mars was not as stable as we thought it was. There were very wet periods and very dry periods—as these sulfate-rich rocks show us.”

The deposits serve as a watermark created by climate fluctuations as the Martian environment transitioned from a wetter one to the freezing desert it is today. The ChemCam instrument, which was developed at Los Alamos in conjunction with the French space agency, determined that the rocks had high concentrations of calcium sulfates, which precipitate as water evaporates. But it also found a few rocks in one area bearing high concentrations of magnesium sulfates, which waits to precipitate onto rock surfaces until water becomes extremely concentrated by evaporation. This tells researchers that the lake-bed rocks must have dried out almost completely at times, pointing to fluctuations in the Martian climate.

Scientists would like to understand how long these transitions took and when they occurred. This latest clue may be a sign of findings to come as Curiosity heads toward a region called the “sulfate-bearing unit,” which is expected to have formed in an even drier environment. It represents a stark difference from lower down the mountain, where Curiosity discovered evidence of persistent freshwater lakes.

Gale Crater is the ancient remnant of a massive impact. Sediment carried by water and wind eventually filled in the crater floor, layer by layer. After the sediment hardened, wind carved the layered rock into the towering Mount Sharp, which Curiosity is climbing today. Now exposed on the mountain's slopes, each layer reveals a different era of Martian history and holds clues about the prevailing environments at the time.

“We went to Gale Crater because it preserves this unique record of a changing Mars,” said lead author William Rapin of Caltech. “Understanding when and how the planet's climate started evolving is a piece of another puzzle: When and how long was Mars capable of supporting microbial life at the surface?”