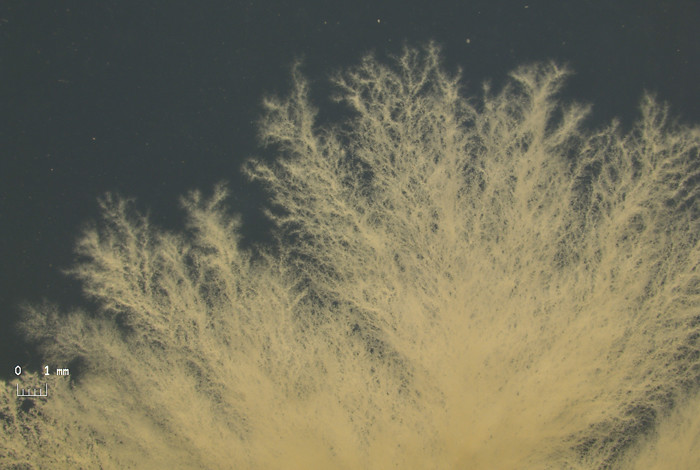 Researchers at Los Alamos National Laboratory and several other institutions have characterized a sample of “mystery” fungus and found its home in the fungal tree of life. The fungus’s exact placement among the taxonomic order was unknown until now. Los Alamos National Laboratory conducts a wide range of biological research efforts as part of its national security science mission, with such research as phylogenetic analysis helping to determine safe pathogens and disease transmission pathways.​

In a step toward bridging the gap between fungal taxonomy and molecular ecology, scientists from several institutions including Los Alamos National Laboratory have characterized a sample of “mystery” fungus collected in North Carolina and found its home in the fungal tree of life.

“Working estimates tell us that there should be more than 5 million species of fungi,” said Cheryl Kuske, a Los Alamos scientist on the project. “We have really only identified and fully described 100,000 of them, though, and new DNA sequencing capabilities show us that many, many specimens in research collections are uncharacterized. Solving this particular mystery shows the potential value of using environmental sequencing to guide taxonomic and ecological discovery.”

The fungal sample was interesting partly as it represented a major component of the observed fungal population in a pine forest and it responded positively to elevated CO2 and nitrogen amendment treatments that mimic future environmental conditions--yet the sample’s exact placement in the taxonomic order was unknown. The sample was eventually given a new name, Bifiguratus adelaidae, as reported recently in the journal Mycologia.

Why was this hard? In times when a simple cheek swab mailed off with a check can produce a human DNA report listing thousands of ancestors, a sample identification would seem a simple task. But as an editorial in the journal pointed out, this sample represented one of many “dark matter fungi” that populate unknown regions of the fungal tree of life. We can detect their DNA in environmental samples, but their culture has been elusive.

As noted in the journal’s editorial, “This placement is particularly exciting because of the increased understanding of the mycorrhizal role (ability to form symbiotic, nutrient-transfer relationships) for this part of the phylogeny and the fact that very little is known about the species diversity and distribution in this part of the tree. Bifiguratus adelaidae may have a symbiotic function in roots, having been detected in orchid and chestnut roots, but it is also well-documented in soils from north temperate zones.”

Interestingly, the collected sample had been cultured successfully in the laboratory only when it was allowed to grow in the company of a species of bacteria, Methylobacterium, that antibiotics were unable to kill. Normally the fungal sample would have been cleared of such contaminants, but this one resisted their attempts. The authors posit that the symbiotic or commensal microbes’ presence may be part of the culturing success. Understanding complex microbial and fungal communities is progressing, Kuske noted, by allowing organisms to grow as defined mixtures.

Los Alamos National Laboratory conducts a wide range of biological research efforts as part of its national security science mission, with such research as phylogenetic analysis to determine safe versus dangerous pathogens and to identify disease transmission pathways.

The Bifiguratus adelaidae was named in honor of Adelaida Chaverri Polini. Dr. Chaverri was a world-recognized tropical biologist and role model for women in Latin America in science, technology, engineering, and mathematics. Her major contributions were in the study and conservation of tropical montane forests and treeless alpine grasslands (páramos). As a biologist, she recognized the importance of mycorrhizal fungi and contributed to the description of a fungus in the Acaulosporaceae, a fungus in the same phylum as the species described in this paper. She supported the creation of Costa Rica’s National Park Service, providing the basis for extensive conservation of biological diversity. In 2013, she was included in the Galería de la Mujer, one of the highest honors given to Costa Rican women for their dedication to defending and improving women human rights.

Funding: The Los Alamos and Western Illinois university portions of this study were supported through a Science Focus Area grant from the DOE Office of Science (Office of Biological and Environmental Research), with Los Alamos as the team leader for this activity. Other team members were variously funded by SE (Research Inspiring Student Excellence) and Women in Science programs at Western Illinois University, Michigan State University AgBioResearch and U.S. Department of Agriculture, the College of Agriculture and Life Sciences at The University of Arizona, National Science Foundation (NSF) DEB-0640996 and DEB- 0640956, NSF DEB-1441715, NSF DBI-1429826 and National Institutes of Health (NIH) S10-OD016290.