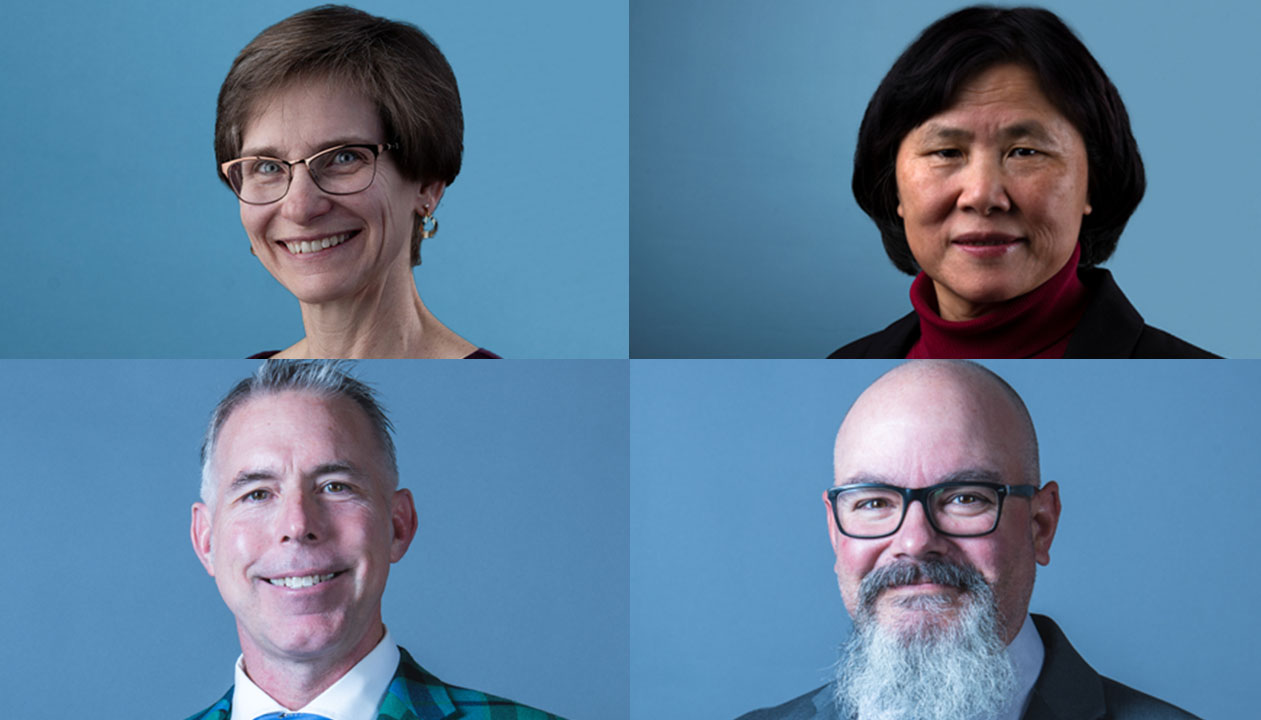 The Laboratory’s 2021 Fellows are: Elizabeth Hunke and Baolian Cheng, top row, and David A. Smith and Blas Uberuaga, bottom row.

“To be a Fellow at the Laboratory is to be a leader in our workplace and within the scientific community at large,” said Thom Mason, Laboratory director. “I am honored to recognize these four fellows and thank them for their extraordinary contributions and accomplishments.”

Baolian Cheng, of the Plasma Theory and Applications Group, has made sustained high-level contributions to national security and the Lab’s mission over the past 25 years. Her discoveries have fundamentally affected the methodology for weapons certification. Throughout her career, Dr. Cheng has made vital contributions to hydrodynamic instabilities and mix, pit lifetime studies, primary certification metrics, primary boost metrics, and thermonuclear ignition metrics for inertial confinement fusion. Furthermore, she is a global expert on boost and ignition metrics, and is known for her strong foundational and first principles theoretical developments.

Elizabeth Hunke, of the Lab’s Fluid Dynamics and Solid Mechanics Group, is internationally recognized as the world’s leading modeler of sea ice. Dr. Hunke leads the CICE Consortium, an international collaboration of sea ice modelers, and is a senior member the Lab’s climate modeling team, which contributes cutting-edge research and development for the Department of Energy’s Energy Exascale Earth System Model (E3SM) project. She has been a key force in mentoring two generations of climate team members. She also serves as the program manager for the Earth and Environmental Systems Sciences Division in DOE’s Office of Science, a $30 million portfolio of experimental and modeling research.

David A. Smith, of the Space and Remote Sensing Group, has made groundbreaking contributions to the fundamental understanding of natural and human-made radio-frequency signatures. He led the transfer and implementation of these discoveries into an array of satellite-based electro-magnetic pulse (EMP) sensors for the U. S. Nuclear Detonation Detection System. He is also a highly effective leader of complex and high-consequence space systems. His foundational work in lightning physics includes the discovery of a new class of lightning. He developed advanced techniques for classifying EMP signatures, which enabled the automated separation of nuclear detonation signatures from lightning and other natural and human-made signatures.

For more than 20 years, Blas Uberuaga, of the Materials Science in Radiation and Dynamics Extremes Group, has contributed to the field of atomistic modeling of radiation effects in materials where he performed pioneering research in complex oxides and nanomaterials. He is the director of DOE’s Fundamental Understanding of Transport Under Reactor Extremes (FUTURE), which researches the extreme conditions of irradiation and corrosion that impact materials in nuclear reactors. His scientific work to understand these effects continues to showcase Los Alamos’ expertise. Additionally, he’s shown exceptional leadership in the mentoring of 27 laboratory postdoctoral researchers and six graduate students.