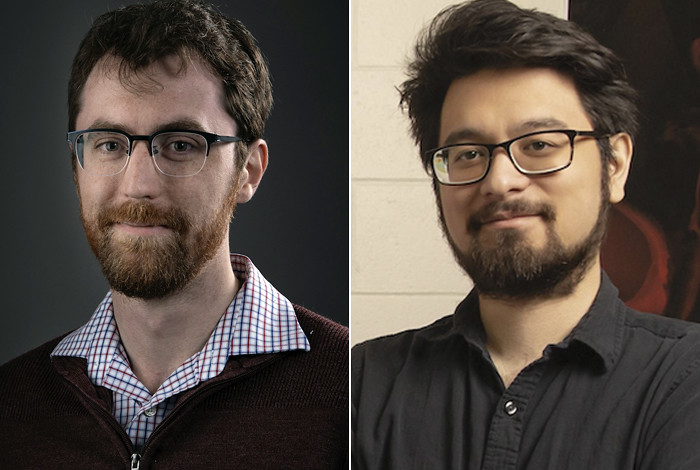 “The observations themselves were carried out by a large team of radio astronomers across the world,” said Ryan. “The image was the result of worldwide coordination of radio telescopes, along with some surprisingly good weather across the globe for the few days when the observations took place. It was a pleasure to provide simulated data for these observers while they were carrying out this epic task. My role in the Event Horizon Telescope collaboration is to support interpretation of the actual observations by delivering numerical models of the accretion disks around the black holes being imaged.”

Wong noted, “My main focus was to interpret the data from the accretion flow simulations Ben and others performed and to transform it into a set of images so that we could construct a basis for comparison between the simulation results and the real world data. We were all very fortunate that the final data exhibited such strong geometric features and thus that the comparison enabled us to make clear predictions about underlying physical parameters.”

The Breakthrough Prize Foundation and its founding sponsors -- Sergey Brin, Priscilla Chan and Mark Zuckerberg, Ma Huateng, Yuri and Julia Milner, and Anne Wojcicki – this week announced the recipients of the 2020 Breakthrough Prize and 2020 New Horizons Prize, awarding a collective $21.6 million in recognition of important achievements in the life sciences, fundamental physics, and mathematics. The $3 million prize will be shared equally with 347 scientists co-authoring any of the six papers published by the EHT on April 10, 2019.

Citation: For the first image of a supermassive black hole, taken by means of an Earth-sized alliance of telescopes.

Description: Using eight sensitive radio telescopes strategically positioned around the world in Antarctica, Chile, Mexico, Hawaii, Arizona and Spain, a global collaboration of scientists at 60 institutions operating in 20 countries and regions captured an image of a black hole for the first time. By synchronizing each telescope using a network of atomic clocks, the team created a virtual telescope as large as the Earth, with a resolving power never before achieved from the surface of our planet.

Now in its eighth year, the Breakthrough Prize, known as the “Oscars of Science,” annually recognizes achievements in the life sciences, fundamental physics and mathematics, disciplines that ask the biggest questions and seek the deepest explanations. Considered the world’s most generous science prize, each Breakthrough Prize is $3 million.

As a collective, this year’s Breakthrough Prize laureates probed the heavens to capture the first image of a black hole; imagined gravity at the quantum level; laid the foundation for non-opioid analgesics to extinguish chronic pain; established the biological basis of how much we eat and weigh; and discovered common mechanisms underlying neurodegenerative disorders, including early-onset dementia.

The new laureates will be recognized at the eighth annual Breakthrough Prize gala awards ceremony on Sunday, November 3, at NASA Ames Research Center in Mountain View, California, and broadcast live on National Geographic. Each year, the program has a theme, and this year’s topic -- “Seeing the Invisible” -- is inspired by the Event Horizon Telescope collaboration, which created the first image of a black hole, as well as the broader power of science and mathematics to reveal hidden, uncharted worlds.