What could desert rocks tell us about life on Mars?

Living microbes formed rock varnish in the desert Southwest. A new podcast considers whether they play the same role on Mars. 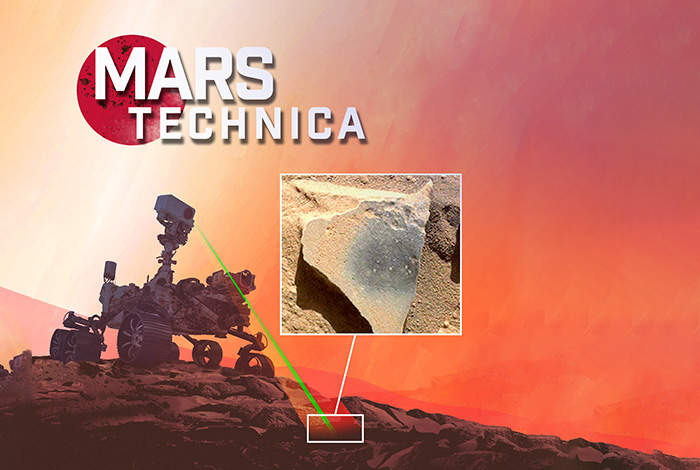 What can the dark, hard coating on rocks in the desert Southwest possibly tell us about life on Mars? Listen to the most recent episode of the Mars Technica podcast to find out.

LOS ALAMOS, N.M., Sept. 3, 2020—The dark, hard coating found on rocks and cliff faces in the desert Southwest could tell us something about life on Mars, explains a new episode of the Mars Technica podcast. This desert varnish, which was the canvas for petroglyphs chiseled by New Mexico’s earliest inhabitants, may also be found on Mars, which holds intriguing possibilities for scientists.

“Living microbes play a role in forming rock varnish on Earth—one we don’t fully understand yet—so maybe they play a role in forming rock varnish on Mars, too,” said Nina Lanza, a Los Alamos National Laboratory planetary scientist and member of the team that developed SuperCam, which is on its way to Mars aboard NASA’s Perseverance rover. “We know that microbes in varnish are well suited to the martian environment. They can repair radiation damage to their DNA and tolerate extreme temperatures, and they need only a trace of water vapor to survive. Because Mars is cold, dry, and bombarded by solar radiation, these traits make rock varnish an interesting place to look for a signature of life on Mars.”

In this episode, Nina Lanza is joined by Chris Yeager, an environmental microbiologist at Los Alamos, to discuss what rock varnish is and what it might tell us about life on the Red Planet.

This is the sixth episode of Mars Technica, a new seven-series podcast produced by Los Alamos National Laboratory, which delves into the Lab’s role on the Mars Perseverance mission. You can stream episodes via the Mars Technica website. You can also find and subscribe to Mars Technica on Apple Podcasts, Spotify, Stitcher and Google Podcasts.