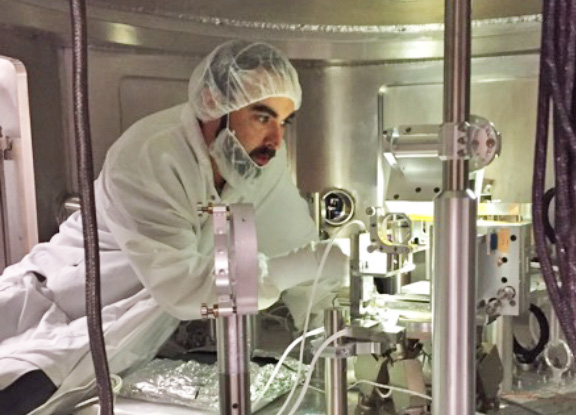 Erik Watkins of the Laboratory’s Materials Synthesis and Integrated Devices group inside the Matter in Extreme Conditions/Linac Coherent Light Source at SLAC.

LOS ALAMOS, N.M., Sept. 1, 2021—Complex carbon-based molecules are everywhere in the Cosmos.  How many of these molecules are formed is still something of a mystery, particularly for carbon molecules formed by nature on primordial Earth that gave rise to life on this planet.

Researchers at Los Alamos National Laboratory, using a laser-driven compression technique and x-ray diffraction interrogation at the Stanford Linear Accelerator (SLAC) facility in California, have recently discovered a mechanism for the formation of complex carbon sheet-shaped solid molecules in liquid benzene, a common hydrocarbon, that could unravel some of the carbon formation mystery.

An allotrope is two or more different physical forms of an element. Graphite, graphene, and diamond are all allotropes of carbon. Benzene, a ring-shaped molecule that consists of six carbon and six hydrogen atoms, is primarily used to make other chemicals, mostly ethylbenzene, a precursor to styrene, used to make polymers and plastics like polystyrene.

One hypothesis for the formation of life on earth is supported by the theory that asteroid and comet impacts provided a mechanism for complex carbon-based molecule formation, a key building block of life, due to the extreme pressures and temperatures in a shock wave. This research shows how carbon evolves from the simple molecule benzene under shock compression. There have been several works that have looked at this problem from a theoretical approach, but these are the first in situ measurements of benzene’s evolution to carbon under shock using high brilliance x-rays.

In this study, researchers used a laser to shock a benzene sample and timed a coherent pulsed x-ray probe from the Linac Coherent Light Source x-ray free electron laser at SLAC to obtain the structure of the products forming as benzene transforms under shock loading. The study, using high brilliance x-rays to “see” inside the materials published today in the Journal Nature Communications, found expanded sheet-like structures of carbon in clusters similar to high explosives.

“Discovering new forms of carbon and mixtures of allotropes formed in these extreme conditions, being able to probe optically opaque conditions with x-rays for the first time in shock driven reactions, in many ways has been a holy grail dating back to the early shock physics work that started with Manhattan Project,” added Dattelbaum.

The work is a collaboration of Los Alamos National Laboratory and the SLAC National Accelerator Laboratory, and is funded by the Department of Energy/National Nuclear Security Administration’s Dynamic Materials Properties program under the Office of Experimental Sciences.