Progress overcoming a series of conceptual challenges could deliver easy-to-make lasers for medicine, research, and computing 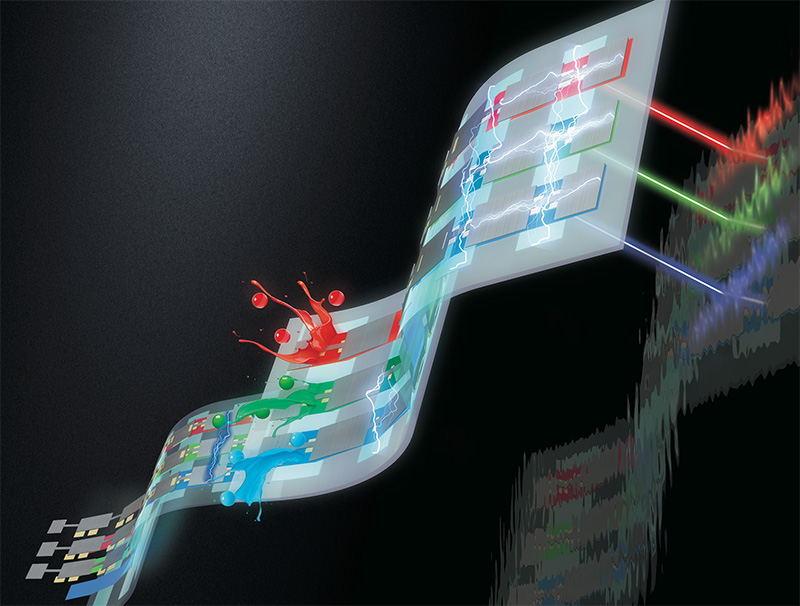 Colloidal quantum dot diodes can be created on the laboratory benchtop and have great potential in a wide range of practical applications. Researchers at Los Alamos National Laboratory are developing approaches to overcoming the remaining challenges for practically realizing these devices.Nature Photonics,

LOS ALAMOS, N.M., Sept. 1, 2021—In a new review article in Nature Photonics, scientists from Los Alamos National Laboratory assess the status of research into colloidal quantum dot lasers with a focus on prospective electrically pumped devices, or laser diodes. The review analyzes the challenges for realizing lasing with electrical excitation, discusses approaches to overcome them, and surveys recent advances toward this objective.

While allowing for exquisite control of the material’s properties, this growth method is highly demanding and requires a clean-room environment. In addition, it is restricted to a fairly small number of mutually compatible materials used as a lasing medium and an underlying substrate. Specifically, compatibility issues greatly complicate integration of existing semiconductor lasers with standard silicon-based microelectronics.

“These problems can, in principle, be resolved with inexpensive solution-processable light emitters,” Klimov said. “In particular, an attractive alternative to standard quantum wells is semiconductor particles prepared via bench-top colloidal chemistry.”

Many key milestones of direct relevance to the development of colloidal quantum dot lasers have been achieved in Los Alamos, in the Nanotechnology and Advanced Spectroscopy team of the Chemistry division. This team has been engaged in state-of-the art quantum dot research for more than two decades and has been responsible for numerous contributions in the areas of quantum dot synthesis, their fundamental studies and device applications.

Colloidal quantum dots can be synthesized in bulk quantities in a standard wet-chemistry lab using inexpensive, readily available precursors. Further, they can be combined with virtually any substrate that would resolve the issue of compatibility with silicon microelectronics and open new areas of applications not accessible with traditional laser diodes.

There are also additional advantages derived from the unique quantum nature of colloidal nanocrystals. In particular, due to their ultrasmall sizes, their emission wavelength can be readily tuned by varying nanocrystal dimensions. This powerful capability could  enable laser diodes with an ultra-wide range of accessible colors.   Further, the discrete structure of quantum-dot atomic-like states inhibits thermal depopulation of the lowest-energy emitting states and thereby reduces lasing thresholds and improves temperature stability of a lasing device.

“Despite these potential benefits, the colloidal quantum dots are difficult lasing materials,” Klimov said. “High-quality nanocrystals have been available since the early ‘90s. However, they would not lase until around 2000, when our team at Los Alamos demonstrated for the first time the effect of light amplification with cadmium selenide nanocrystals.”

The key to this demonstration was two important discoveries made at Los Alamos. One was the realization that optical gain relies not on single excitons (as in a standard light emission process), but on biexcitons and other states of higher multiplicity. The other identified challenge was that the primary deactivation channel of biexciton states was very fast nonradiative Auger recombination whereby biexcitons generate heat instead of light.

To resolve these challenges, Los Alamos researchers utilized densely packed quantum dot solids, which allowed them to boost the rate of stimulated emission so it could outpace Auger decay.  Further, they employed very short (about 100 femtosecond) pulses to populate quantum dots with biexcitons before they had a chance to decay via the Auger process. This approach produced a long-awaited result – the realization of amplified spontaneous emission, proof-of-principle for colloidal quantum dot lasing.

Auger recombination still represents a major obstacle for the realization of technologically viable quantum dot lasers. Another serious challenge is the development of practical devices that can sustain ultra-high current densities of hundreds of amperes per centimeter squared required for lasing. The realization of such structures is greatly complicated by poor charge-transport properties of granular quantum dot solids and high resistivity of solution-processed  charge-transport layers.  As a result, devices are quickly overheated at high current densities and eventually fail due to heat-induced breakdown.

To resolve the thermal damage problem, Los Alamos developed a new device architecture in which current flow was restricted to a small area of 50 by 300 microns. This current-focusing approach boosts current density and simultaneously reduces the heat generation volume and improves heat exchange with the environment. An additional trick was to deliver carriers in short bursts of current between which the active volume had a chance to dump heat into a surrounding medium.

These measures allowed for boosting the current densities to unprecedented levels of about 1,000 amperes per square centimeter, more than a hundred-fold enhancement compared to previous records. This was sufficient to achieve broadband optical gain capable of sustaining lasing across a wide range of wavelengths spanning from red to yellow with a single quantum dot sample.

Another challenge is incorporation of an optical resonator so as it does not disrupt charge injection pathways and, at the same time, maintains lasing despite the presence of “optically lossy” charge transport layers. This problem also has been recently resolved by Los Alamos researchers.

In particular, they applied an interesting approach wherein an optical resonator was prepared as a periodic grating engraved into a layer serving as an electron injector. In this way, they preserved a standard architecture of a light emitting diode (LED) but endowed it with an additional function of lasing device. The developed dual-function structures performed as a standard LED operating under electrical pumping and a laser activated optically.

The final step is to combine all of these strategies in a single device capable of lasing with electrical excitation. Given recent advances in ultrahigh current density architectures and successful recipes for cavity integration, this objective seems to be within close reach, suggesting that colloidal quantum dot laser diodes soon may become a reality.