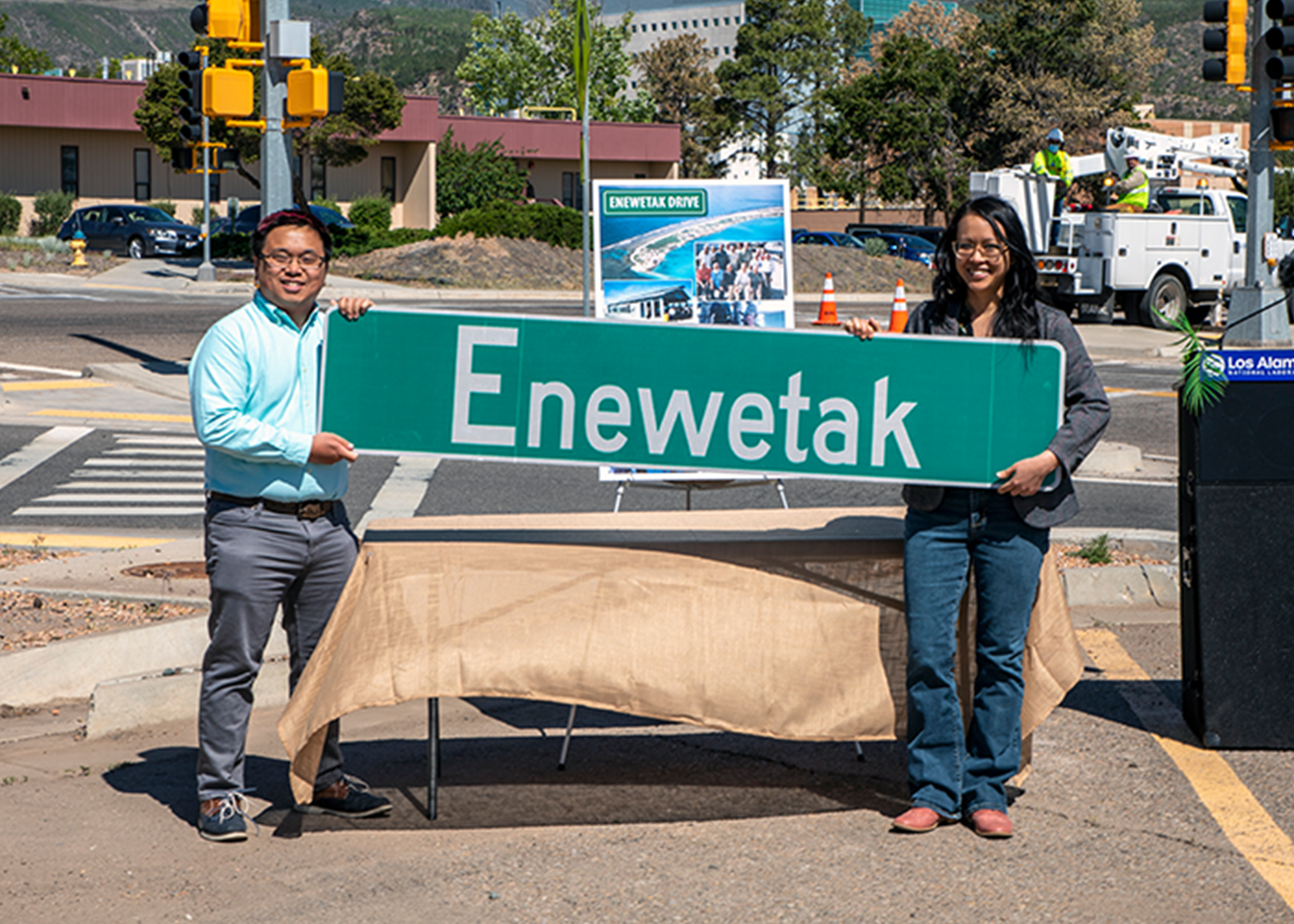 Arnold Eng and Roseanne Cheng, Laboratory employees and members of the Asian and Pacific Islander Employee Resource Group, unveil the new Enewetak sign. It reflects the preferred spelling of the people indigenous to the Enewetak Atoll, a Pacific island where nuclear testing was conducted from 1948 to 1958.

Los Alamos National Laboratory recently recognized Asian American, Native Hawaiian and Pacific Islander Heritage Month by updating the sign for Enewetak Drive, a street on Laboratory property commemorating the sacrifice made by the people of the Pacific Island Enewetak Atoll, who were relocated nearly 75 years ago to accommodate nuclear testing.

The sign replacement was a joint effort between the 100+ members of the Asian and Pacific Islander Employee Resource Group and the Associate Laboratory Director’s Facilities and Operations office. It reflects the preferred, up-to-date spelling of “Enewetak” by those indigenous to the atoll where the Lab had a significant presence during the nation’s weapons testing period.

“As a staff scientist, a few buildings down the road from this street sign, I have historical and technical ties to the theoretical physicists involved in the nuclear testing of these weapons,” said Roseanne Cheng, API ERG co-chair. “There is joy for me in learning about all of the great people involved in our Lab’s history, the great physicists like Norris Bradbury to Frank Harlow, who live as legends in lore for me and other staff, generations later to enjoy.”

“ALDFO is thrilled to continue to make positive changes for the Lab,” said Bret Simpkins, associate Lab director for Facilities and Operations. “This event shows how working with respect and inclusion is as important as the work we do, and changing this sign shows respect for the Enewetak people.”

For many decades the road on the Lab’s campus, which runs eastbound off Diamond Drive, has been spelled “Eniwetok Drive.” It’s uncertain when the atoll’s name was first westernized to the Eniwetok spelling and by whom, according to Roger Meade, Laboratory historian.

“Enewetak and its people are little known today,” Meade said at a dedication ceremony in July. “Their sacrifice, made for our nation, is little recognized or appreciated. The new sign being dedicated today is a show of respect for a people who have given us much.”

“There is also sadness for me, knowing what happened to the people of Enewetak Atoll and the Marshall Islands,” said Cheng. “We can acknowledge what’s happened in history and be in the present, today, here at Los Alamos.”

The United States has not tested nuclear weapons since 1992. Since then, the Laboratory — which stewards a majority of the weapons in the U.S. nuclear stockpile — has relied on advanced modeling and simulation software (rather than testing) to resolve the often-complex integrated physics questions and concerns about these weapons.