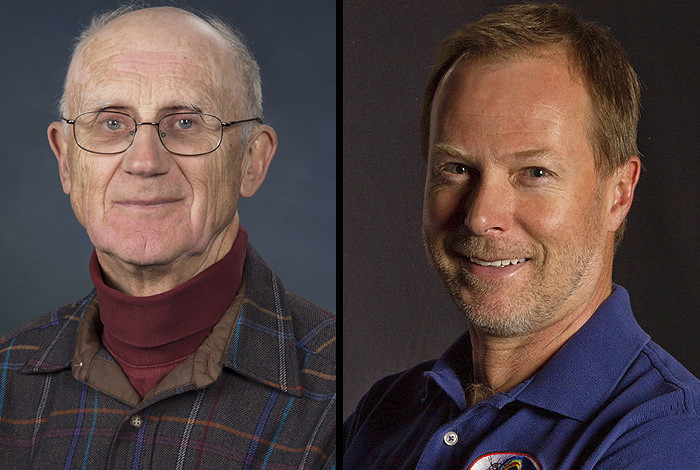 The American Geophysical Union (AGU) named two Los Alamos National Laboratory scientists fellows in recognition of their leadership and excellence in Earth and space sciences. Geoffrey D. Reeves and S. Peter Gary are among 62 new fellows who will be honored at AGU’s annual conference in December in Washington, D.C.  Only 0.1 percent of AGU’s 60,000-plus member scientists are named fellows each year, according to the international organization.

Reeves has been involved in numerous NASA and national security missions, most recently the Van Allen Probes mission to study the Earth’s radiation belts.

“Geoff Reeves is an exceptional leader in the field of space weather whose research has substantially expanded our understanding of the Van Allen belts and how to protect our assets in space from the damaging effects of radiation,” said Nancy Jo Nicholas, principal associate director of Global Security at Los Alamos National Laboratory. “We are very proud to see him named an AGU fellow. It is a well-deserved honor.”

Additionally, Reeves led a team that developed the Dynamic Radiation Environment Assimilation Model (DREAM) to predict dangers from the natural space environment or high-altitude nuclear explosions. A Los Alamos National Laboratory fellow since 2013, he is a frequent international speaker and prolific author who has made Los Alamos space weather data available to the broad scientific community, supporting worldwide advances. His scientific work has been cited more than 17,000 times.

Gary, who retired from Los Alamos in 2012, is a global expert on turbulence and instabilities of space plasmas.

“Peter’s methodical and creative insights into wave-particle interactions at the small scale have enabled us to understand how plasmas actually behave and interact at the larger scale, like solar wind and its interaction with the Earth’s space environment,” said Herbert O. Funsten, director of Los Alamos’ Intelligence and Space Research division, where Gary worked. “It is no surprise that he has been named an AGU fellow. His scientific work is world-renowned, and we are proud to call him one of our own.”

Gary joined Los Alamos in 1977 and subsequently served as a manager, mentor, and intellectual leader. He was selected as a Los Alamos fellow in 2002 and also named a fellow of the American Physical Society. In addition, he served as an associate editor of the Journal of Geophysical Research, Physics of Plasmas and Physics of Fluids. Gary remains active at Los Alamos through his research and collaborations.