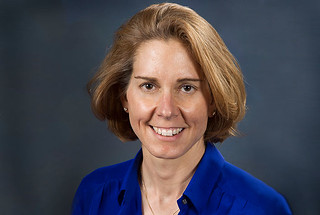 Los Alamos National Laboratory Fellow Jaqueline Loetsch Kiplinger has been announced as a fellow of the American Chemical Society. She is among 51 new fellows for the nation’s key chemistry organization, and is one of only seven Los Alamos scientists honored in this way in the 75-year history of the Laboratory.

“I am very honored and humbled to be distinguished as an ACS Fellow, and to join many great scientists who already hold this lifetime recognition for outstanding achievements in and contributions to science, the profession, and ACS,” said Kiplinger. “An honor such as this would not be possible without the many contributions and support from my valued collaborators, postdocs, students, and colleagues over the years. It is to them that I am truly grateful.”

The ACS Fellows Program recognizes members of ACS for their outstanding achievements in and contributions to science, the profession and the Society. The lifelong designation recognizes ACS members for their excellence in scientific leadership and for their exceptional volunteer service to the ACS community. ACS is unusual amongst society Fellowships in requiring a such strong service component. With more than 161,000 members, ACS is the world’s largest scientific society and the premier professional home for chemists, chemical engineers and related professions worldwide.

“I congratulate Jackie for this exceptional honor,” said John Sarrao, principal associate director of Science, Technology and Engineering at Los Alamos. “The American Chemical Society’s selection of her as a Fellow is a well-deserved recognition for her outstanding achievements in actinide science, which underpins our national security mission,” he said. “Her body of work in actinide chemistry has not only challenged our understanding of the synthetic and mechanistic behavior of this important class of elements, but also expanded the accessibility of this chemistry to new audiences through the development of safe and simple routes to important classes of reagents. In addition, this award honors the exceptional service she has provided to the chemistry community. Her service to the laboratory is highlighted in her work mentoring the next generation of chemists,” he stated.

Kiplinger was recognized for “pioneering contributions in the synthetic chemistry of uranium and thorium, for significantly expanding the understanding of fundamental actinide and lanthanide chemistry, and for outstanding mentoring at every level,” and “leadership at ACS, including Division of Inorganic Chemistry, Committee on Ethics, and National Awards Selection Committees, and for many contributions to the ACS community, especially with regards to mentoring,” the ACS documentation noted.

As noted in her nomination, Kiplinger is internationally recognized as a scientific leader in actinide chemistry. Kiplinger’s novel synthetic approaches have led to the systematic isolation of new classes of molecular uranium and thorium complexes and chemistry. In addition to discovering new actinide reactivity patterns and bonding motifs, she developed inexpensive, simple and safe techniques to make thorium and uranium hydrides and starting materials, which has been critical to advancing the synthetic and mechanistic chemistry of these important elements and for understanding their behavior in a variety of applications.

For this body of work, she was selected as the first woman to receive the F. Albert Cotton Award in Synthetic Inorganic Chemistry from the ACS (2015), and has been awarded the Violet Diller National Award for Professional Excellence in Chemistry (Iota Sigma Pi), and the IUPAC International Distinguished Women in Chemistry award (2017).

Said George Stanley, Cyril & Tutta Vetter Alumni Professor at Louisiana State University, “I have the highest scientific opinion of Jackie, her intellectual capabilities, her research quality & productivity, imagination, creativity, and involvement in mentoring. The impact of her research on the inorganic and organometallic community is extremely impressive as judged by her citations, the PR highlights her papers have received, and the awards and recognition she has already garnered.

“It is a genuine honor and pleasure to have had someone of such immense talent and commitment to the chemistry community in my division,” said David Morris, former Los Alamos Chemistry Division leader (now retired).