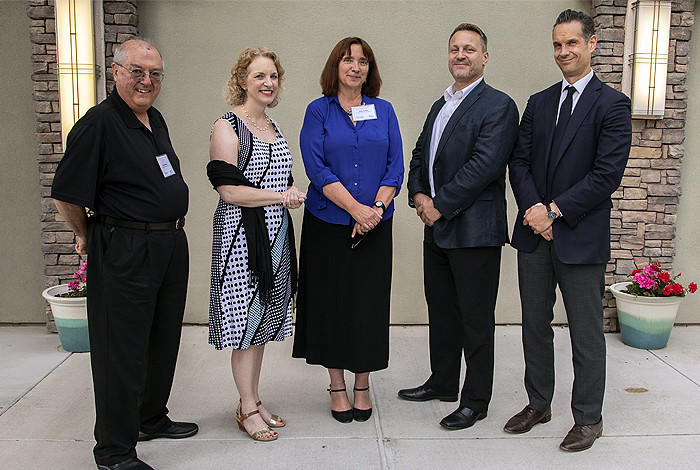 Los Alamos scientist Bette Korber was recently honored with the 2018 Richard P. Feynman Innovation Prize for her ground-breaking HIV vaccine designs. Korber was recognized at a ceremony that celebrates the “Next Big Idea” – scientific breakthroughs that achieved exceptional innovation.

Los Alamos National Laboratory researchers Laura Lilley and Yuxiang Chen were also recognized for outstanding presentations at DisrupTech — an annual event hosted by Richard P. Feynman Center for Innovation at Los Alamos and New Mexico Angels — that offers scientists a platform to present their work to businesses and the community.

“At the Laboratory, our researchers develop technologies that can have tangible benefits to industry and the general public,” said Nancy Jo Nicholas, principal associate director of Global Security at Los Alamos National Laboratory, which oversees the Feynman Center. “DisrupTech is a unique opportunity to share those emerging technologies and begin exploring how they could be developed and brought to market.”

The Feynman Center also created the Innovation Honor Society and inducted 10 Los Alamos scientists for their outstanding contributions to scientific discovery, innovation and the transfer of technology to the commercial sector.

Korber, a theoretical biologist, has drawn inspiration for her innovative vaccine designs from the decades of work pursued by a team she leads. That team built a global HIV database of over 840,000 published HIV sequences for scientific research.

“Without the work of my database team, the vaccines would not have been possible,” said Korber. “I am honored to represent their efforts that are reflected in this award.”

Several of Korber’s vaccine designs have transitioned to the commercial sector. Janssen, a subsidiary of Johnson & Johnson, is testing one of her designs, called “mosaic,” in a clinical trial called the Imbokodo Study, being conducted in South Africa. If successful, the vaccine could be one of the first to prevent the HIV infection.

Biotechnology company VIR is also testing another HIV vaccine design in monkeys that have the simian immunodeficiency virus (SIV), the counterpart to HIV.

Korber says the award is also significant because it reminds her of a tough phase in her career. As a new Caltech graduate student in the early 1980s, there were few women students and faculty. She took a class from Feynman, and then went on to become friends with him.

“At a time when kindness seemed rare, I really appreciated his generous spirit and encouragement,” said Korber. “I think he would have been pleased about this award.”

Chen, a postdoctoral researcher, won the “Most Fundable Technology” award for his presentation, “NanoCluster Beacons: Fast Testing for Food Safety.” The $25,000 funding award will help Chen improve his technology that quickly and accurately tests pathogens in food.