How the first atomic bomb got its name 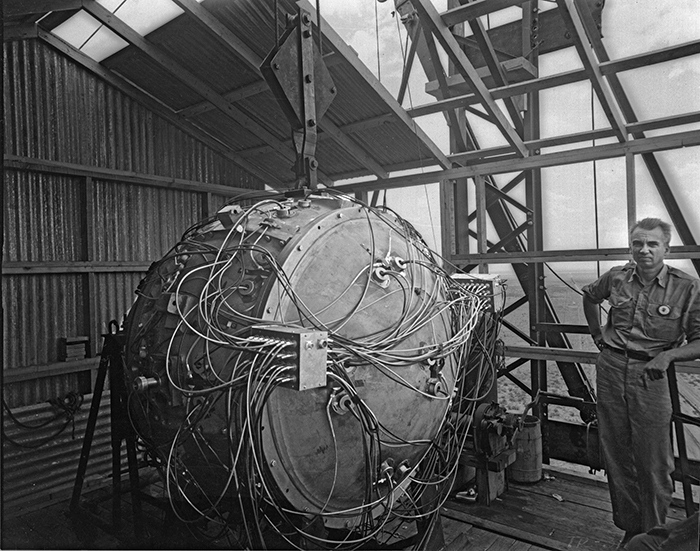 The Gadget – the world’s first atomic bomb – is an implosion-style plutonium weapon that was tested at the Trinity test in the New Mexico desert on July 16, 1945.

The world’s first-ever atomic bomb is called The Gadget.

It was detonated in the New Mexico desert on July 16, 1945 during the Trinity test, verifying that an implosion-type plutonium bomb would be successful when released above Nagasaki just weeks later. That atomic bomb was called Fat Man and it was a weaponized version of the Trinity device of The Gadget.

According to the longtime lore, the bulbous-looking Fat Man bomb’s name was inspired by British Prime Minister Winston Churchill. After the Thin Man bomb, whose moniker was inspired by the U.S. President Franklin Roosevelt, didn’t come to fruition, the gun-type uranium atomic bomb named Little Boy was developed. It was likely dubbed as such because it was smaller in size.

But how did The Gadget get its name? Was it a code name for security purposes? Just a nickname? A tribute to being the first?

Many Los Alamos veterans, including historian Ellen McGehee and retired scientists Bill Archer and Glen McDuff as well as staff of the National Security Research Center (the Lab’s classified library), recently looked into the origins of The Gadget’s name.

As it turns out, Director J. Robert Oppenheimer suggested using the term as work began at the Laboratory.

The Gadget vs. a gadget

At the April 1943 Los Alamos Primer Conference, physicist Robert Serber used the word “bomb” as he began his now-famous lectures. According to Serber, this prompted Oppenheimer to take action: “After a couple of minutes Oppie sent (physicist) John Manley up to tell me not to use that word. Too many workmen around, Manley said. They were worried about security. I should use ‘gadget’ instead.”

The term “gadget” was commonly used during the 1940s to describe experimental scientific and engineering devices.

Because gadget is a generic term, it was applied to multiple weapons types during the war and not exclusively to the Trinity device. For instance, records in the NSRC refer to “the gun gadget” (Little Boy) and “the implosion gadget” (Fat Man). In most cases, though, the term applies to the imploding bomb.

Also noteworthy, the name Fat Man is used as a term for both a type of weapon as well as the specific weapon detonated above Nagasaki on Aug. 9, 1945.