Award honors scientists and engineers for outstanding contributions to their fields 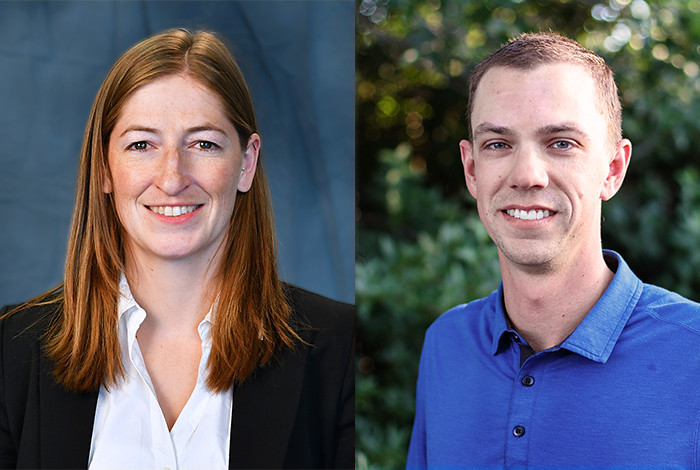 Abigail Hunter (left) and Shea Mosby are recipients of the Presidential Early Career Award for Scientists and Engineers.

“Abigail has become a technical thought leader within the Laboratory’s weapons program and our materials modeling community, as well as an internationally recognized expert in materials science and the physics of solid-state materials,” said Mark Schraad, Computational Physics Division leader. “She has established a critical skill set that serves her in a unique position at the intersection of Los Alamos’ physics modeling, software development and supporting science endeavors.”

The Presidential Early Career Award is the highest honor bestowed by the U.S. government on outstanding scientists and engineers in the early stages of their independent research careers.

“Shea is a deep-thinking early career scientist who has contributed to many of the nuclear reaction measurements done at the Los Alamos Neutron Science Center. He is currently developing a novel concept to measure nuclear reactions in radioactive isotopes,” said David Meyerhofer, Physics Division leader.

Hunter’s research focuses on understanding and modeling nanoscale deformation mechanisms in metals. She is a leading expert in phase field modeling of dislocation-based deformation behaviors. A primary goal of her work is to better understand defect physics at the mesoscale and then use this information to develop more physically informed continuum-scale material models that must integrate into large-scale, parallel codes used for predictive science at Los Alamos.

Mosby earned his doctorate in experimental nuclear physics from Michigan State University in 2011, where he studied nuclear structure. He came to Los Alamos as a postdoctoral researcher in 2012 to study neutron capture reactions for nuclear technology applications. He became a technical staff member in 2014 and now leads projects studying the nuclear fission process.

Established in 1996, the Presidential Early Career Award for Scientists and Engineers acknowledges the contributions scientists and engineers have made to the advancement of science, technology, education, and mathematics education and to community service as demonstrated through scientific leadership, public education, and community outreach. The White House Office of Science and Technology Policy coordinates the award with participating departments and agencies.