Plutonium and poetry: Where Trinity and Oppenheimer's reading habits met 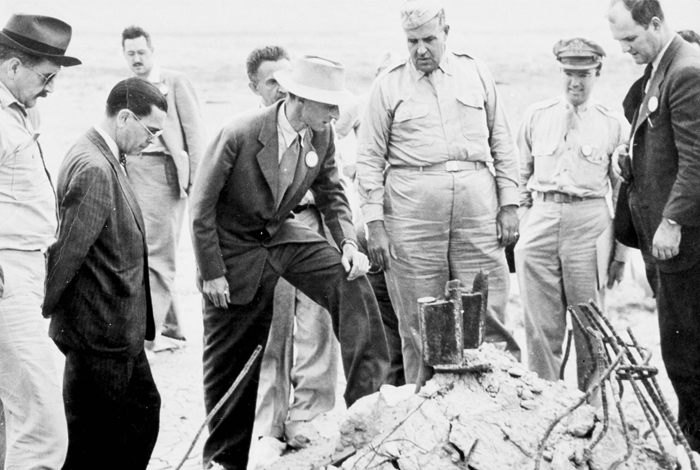 The Lab’s first director, J. Robert Oppenheimer, was a man of sonnets and scientific synthesis.

Oppenheimer’s work at Los Alamos was defined not only by physics and administrative skill, but also by a life philosophy inspired, in part, by literature. The Trinity test, which took place 76 years ago on July 16 in the New Mexico desert, epitomizes this.

Known as one of the greatest scientific achievements ever, the successful detonation of the world’s first nuclear weapon marked the dawn of the Atomic Age. Created in just 27, albeit harrowing, months, Oppenheimer and his team at the Los Alamos Lab worked nonstop on this clandestine effort to help end World War II.

As he had done throughout his life, Oppenheimer continued to foster his love of literature during the Manhattan Project. Two of his influences were John Donne and the Hindu scripture "Bhagavad-Gita." Oppenheimer recalled both during the Trinity test.

Seventeenth-century poet John Donne was one of Oppenheimer’s favorite writers and an inspiration during his work with the Manhattan Project.

In 1962, Manhattan Project leader Gen. Leslie Groves wrote to Oppenheimer to ask about the origins of the name Trinity. According to a copy of the letter that is a part of the collections of the Lab’s National Security Research Center, Oppenheimer said, “Why I chose the name is not clear, but I know what thoughts were in my mind. There is a poem of John Donne, written just before his death, which I know and love.” Oppenheimer then quoted the sonnet “Hymn to God, My God, in My Sickness” about a man unafraid to die because he believed in resurrection.

Oppenheimer continued, “That still does not make a Trinity, but in another, better known devotional poem Donne opens, ‘Batter my heart, three person’d God.’ Beyond this, I have no clues whatever.”

“Batter my heart” expresses the paradox that by being chained to God, the narrator can be set free. A great force could enthrall the narrator to do greater good. Richard Rhodes, who wrote the book "The Making of the Atomic Bomb," proposed that “the bomb for [physicist Niels] Bohr and Oppenheimer was a weapon of death that might also end war and redeem mankind.”

Bhagavad-Gita and the Bomb

Oppenheimer’s copy of "Bhagavad-Gita," translated by Arthur W. Ryder, is part of the collections at the Lab’s Bradbury Science Museum in Los Alamos. Oppenheimer’s handwritten initials appear in the upper right corner of the front endpapers. The book is just one of two of his personal items that the Lab owns, the other being his office chair.

Oppenheimer wanted to read the "Bhagavad-Gita" in the original Sanskrit, which is the primary sacred language of Hinduism. So, as a professor at Berkeley before his time at Los Alamos, he sat in on Sanskrit classes with Arthur W. Ryder, who had published an English translation of the "Bhagavad-Gita". It was a book Oppenheimer would gift to colleagues and friends for the rest of his life.

The "Bhagavad-Gita" expresses a life structured by action. One should detach from desired outcomes and work. The poetic Hindu text is a conversation between Prince Arjuna and the deity Lord Vishnu. Arjuna is anguished at the idea of slaying friends and cousins in war. Vishnu convinces Arjuna to disregard emotional attachments and fear of mistakes. To uphold dharma, the power which upholds the cosmos and society, Arjuna must do his duty, which is fight.

Preparing for Trinity, Oppenheimer’s thoughts were on the success of the test and the impact of the bomb on his life and the world. Vannevar Bush, the director of the Office of Scientific Research and Development (OSRD) and chairman of the National Defense Research Committee (NDRC), said of Oppenheimer in his 1970 memoir, "Pieces of the Action": “I simply record a poem, which [Oppenheimer] translated from the Sanscrit [sic], and which he recited to me two nights before [Trinity]:

In battle, in forest, at the precipice in the mountains,
On the dark great sea, in the midst of javelins and arrows,
In sleep, in confusion, in the depths of shame,
The good deeds a man has done before defend him."

Though Oppenheimer never publicly ascribed to the Hindu faith, he regularly quoted the "Bhagavad-Gita." Most notably, upon seeing the Trinity detonation, Oppenheimer was said to have  recalled the line, “Now I am become Death, the destroyer of worlds.” The quote, however, has been widely misinterpreted, according to historian Alex Wellerstein, who explains in his blog:

“Oppenheimer is not Krishna/Vishnu, not the terrible god, not the ‘destroyer of worlds’ — he is Arjuna, the human prince! He is the one who didn’t really want to kill his brothers, his fellow people. But he has been enjoined to battle by something bigger than himself — physics, fission, the atomic bomb, World War II, what have you — and only at the moment when it truly reveals its nature, the Trinity test, does he fully see why he, a man who hates war, is compelled to battle. It is the bomb that is here for destruction. Oppenheimer is merely the man who is witnessing it.”

Poetry was ever-present in Oppenheimer’s letter writing and in his reactions to current events. We know that, according to the book "American Prometheus," by Kai Bird and Martin J. Sherwin, before the Trinity test, late at night in the base camp mess hall, Oppenheimer sipped coffee, rolled smokes and read French poet Charles Baudelaire.

T.S. Eliot, a poet Oppenheimer admired and hosted later as the director of the Institute for Advanced Study, famously wrote:

“Do I dare
Disturb the universe?”

Oppenheimer was a creative writer — and his own worst critic. While studying at Harvard and Cambridge universities, Oppenheimer wrote prose in imitation of Russian playwright Anton Chekhov and poetry in search of himself. In a 1924 letter to Herbert Smith, his high school English teacher, Oppenheimer said his writing wasn’t “…meant or fit for anyone's perusal.” The only poem of note published by Oppenheimer was “Crossing.” The poem appeared in the summer 1928 issue of the Hound & Horn.

It was evening when we came to the river with a low moon over the desert that we had lost in the mountains, forgotten, what with the cold and the sweating and the ranges barring the sky.

And when we found it again, in the dry hills down by the river, half withered, we had the hot winds against us.

There were two palms by the landing; the yuccas were flowering; there was a light on the far shore, and tamarisks.

We waited a long time, in silence.

Then we heard the oars creaking and afterwards, I remember, the boatman called to us.

We did not look back at the mountains.

In 1963, Oppenheimer was asked by The Christian Century magazine what books shaped his “vocational attitude” and his “philosophy on life.”