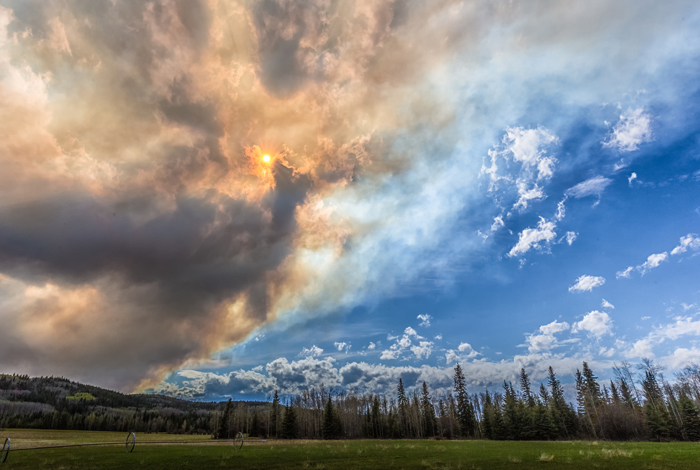 “These observations may be useful for those trying to represent organic light absorbing aerosols, or brown carbon, in climate models by identifying how they age, as well as understanding processes affecting how strongly they absorb light and cause warming,” said James Lee, lead author on a paper released in JGR: Atmospheresthis week and a Los Alamos postdoctoral researcher.

The Woodbury Fire burned nearly 124,000 acres for more than a month before it was contained. With powerful instruments including an aerosol mass spectrometer at Los Alamos’ Center for Aerosol Forensic Experiments (CAFÉ), researchers from Los Alamos and New Mexico Tech measured the chemical, physical, and optical properties of ambient aerosol and trace gas concentrations in four large plumes in real time. The team found that the composition of the plumes as well as aerosol properties within the plumes are more varied than expected. More oxidation of smoke lowers its sunlight absorbing potential and lessens its climatic impact.

“Wildfire plumes are complex and change quickly,” said Allison Aiken, an atmospheric chemist at Los Alamos and coauthor of the study. “Particles at the plume’s center have different shapes and chemistries than at its edge.”

The team was able to observe intact and more-disperse plumes that aged more than half a day while traveling 300 miles across New Mexico, retaining relatively unchanged aerosols at the plume's core but providing valuable insight to how the smoke transforms as it mixes with cleaner air.

“This is important as we need to capture the physicochemical changes that occur as plumes are transported long distances to model the climate impacts correctly and to understand the human health impacts at different locations and distances from the source,” Aiken said.

While the team observed that the Woodbury fire emissions contained brown carbon that absorbed light at a potency that validated previous observations, this was only the case in the core of the plumes. At the edges, organic aerosols absorbed far less light.

Fine-scale results revealed that mixing and oxidation lightened the brown carbon, reducing its ability to absorb light and cause warming. This implies that the warming effects of wildfire brown carbon is likely smaller than published model assessments.

Funding: This research was supported by Office of Science of the U.S. Department of Energy (DOE), Office of Biological and Environmental Research (BER), Atmospheric System Research (ASR) Program, and Office of Workforce Development for Teachers and Scientists. Additional support was received from the National Science Foundation, the Los Alamos Laboratory Directed Research and Development program, and the New Mexico Consortium.