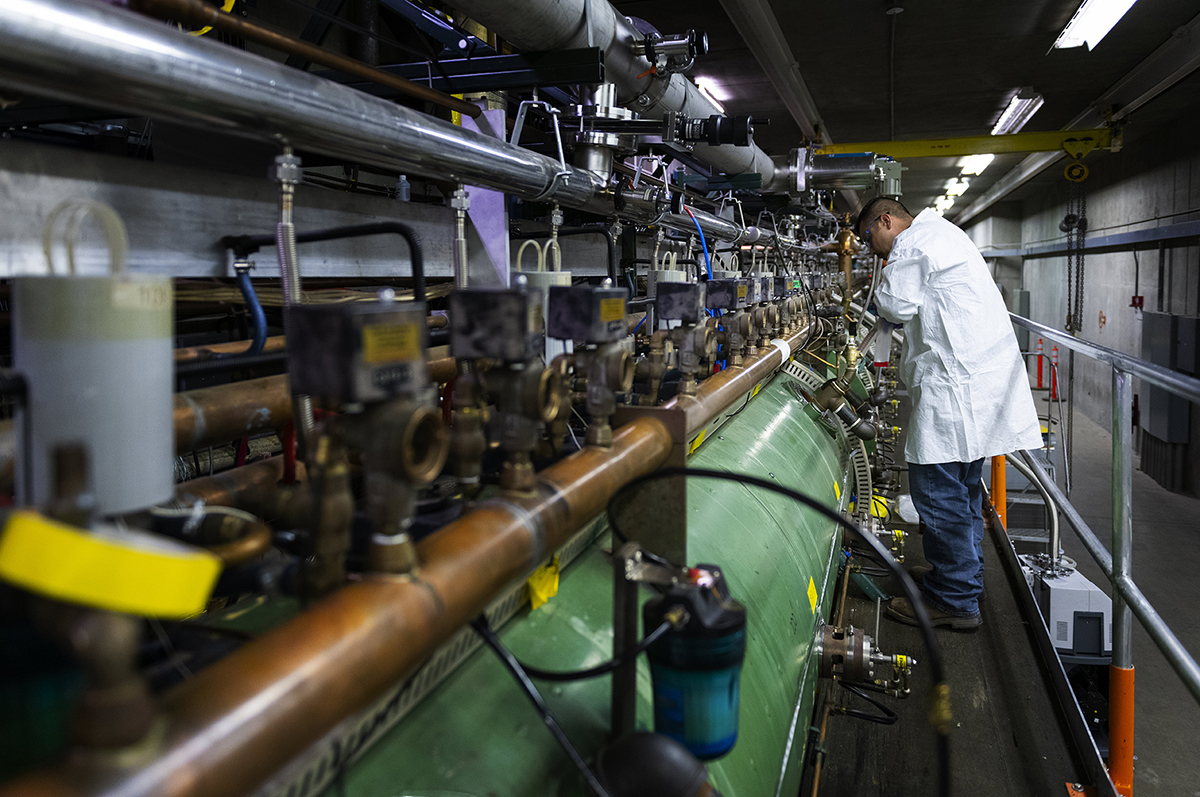 In early June 1972, the world’s most intense proton beam was delivered through nearly a mile of vacuum tanks at the new Los Alamos Meson Physics Facility, now known as the Los Alamos Neutron Science Center, or LANSCE. As the facility has evolved over five decades, that proton beam is now delivered to five state-of-the-art experimental areas, a capability that makes the accelerator on the Pajarito Plateau unique among its peers.

“LANSCE is unique in that many accelerators have just a single mission focus,” said Thom Mason, Laboratory director. “With five areas, we can work on many different types of complicated problems across scientific fields. At LANSCE, our research program in nuclear physics and materials science, as well as our fundamental science and medical isotopes programs, are as essential today as they have ever been.”

Starting from the injector system, the proton beam’s first destination, traveling at just over 100 megaelectronvolts, is the Isotope Production Facility, a key facility within the Department of Energy’s Isotope R&D and Production program and part of a tri-lab effort with Brookhaven National Laboratory and Oak Ridge National Laboratory. In April 2020, as facilities shut down in the pandemic, LANSCE started the beam up ahead of its normal run schedule to fill a supply chain gap and deliver critical supplies of the isotopes strontium-82 (Sr-82), used in heart imaging, and germanium-68 (Ge-68), used in cancer diagnostics.

The Isotope Production Facility excels in the basic science and applied engineering needed to produce and purify useful isotopes that can then be produced at scale in the marketplace. In the fight against cancer, recent and current clinical trials are yielding promising results with the short-lived isotope actinium-225, which delivers high-energy radiation to a cancer tumor without greatly affecting the surrounding tissue. The isotope can be chemically modified to target certain cancers — prostate cancer, colorectal cancer, melanoma and others — that produce a distinctive antigen.

“Unfortunately, almost everyone is affected by cancer, themselves or the people they know and love,” said Kirk Rector, Los Alamos point-of-contact for the DOE Isotope Program. “That’s part of what makes the work around actinium-225 for cancer in particular very exciting. The results from clinical trials using actinium-225 to treat even late-stage prostate cancer suggest that it could be a pretty significant way to attack that horrible disease.”

New Los Alamos research indicates that actinium-225 may also be effective against bacteria, especially important in an age of increased antibiotic resistance.

Powered up to 800 megaelectron volts, and now traveling at 84 percent the speed of light (over 250 million meters, or almost 20 laps around the Earth, per second) the proton beam can be delivered to four more areas.

At the Ultracold Neutron facility, protons are cooled to near absolute zero, about minus 460 degrees Fahrenheit, so that the basic properties of particles can be explored. Last year a research team measured the lifetime of a neutron with the most precision ever, finding that a lone neutron lasts for 877.75 seconds before disintegrating. Those precise measurements can impact the search for physics beyond the standard model — helping unlock the mysteries of new particles, even dark matter. The results could also advance understanding of the abundance of nuclei in the early universe and the formation of elements.

LANSCE also serves a national security mission, helping ensure that the country’s nuclear deterrent is safe, secure and reliable. The Proton Radiography user center images the interior of explosions to produce data for the safe maintenance of the deterrent arsenal – an essential mission since the end of the testing era, and necessary well into the future. At the Lujan Center, another user center at the end of the main proton line, a neutron beam is produced that can offer the microstructural characterization researchers need to probe materials properties, learning how they react under different conditions.

“Understanding materials as they age, along with their interaction with neutrons, represents a key challenge to our physical understanding of weapons as we continue to ensure the safety and effectiveness of the aging nuclear stockpile,” said Bob Webster, deputy director for Weapons at the Laboratory. “The essential data we gather at LANSCE through real-world experimentation complements the modeling and simulation integral to stockpile stewardship.”

The benefits of that data also extend beyond the national security mission. For instance, at the Weapons Neutron Research facility, obtaining the right safety measurements for criticality – the point at which a fission reaction becomes self-sustaining — is crucial data not only for key Laboratory activities, but also for the nuclear industry writ large. Understanding the physics properties of materials, including radiation effects on reactor components, helps ensure that civilian reactors and the people who run them are safe as they contribute zero-carbon emission energy to the grid. The Weapons Neutron Research facility capabilities also mean LANSCE is the premier and only U.S. facility for electronics testing and certification with neutron beams, technology that is applied to avionics, vehicles, medical devices and more.

LANSCE has embarked on improvements to ensure that the facility remains a leader for the coming decades. This spring the spallation target (the source of neutrons) at the Lujan Center was upgraded, with the system redesigned in the process to enhance its performance. In doing so, the Lujan Center is now able to study the kiloelectron volt range, a new energy regime for nuclear physics. Across the accelerator, teams are replacing electrical components with newer and safer ones. Systems that use greenhouse gases are being replaced, as well, in keeping with the Lab’s broader sustainability initiatives.

“The improvements and the investments we’re making result in a safer machine able to do better science,” said Mike Furlanetto, LANSCE director and senior director for the Associate Laboratory Directorate of Physical Sciences. “The kind of experiments we are able to do now were almost unimaginable when I joined the Laboratory 17 years ago, and I’m sure that in another 20 years we will be delivering even more exciting data.”

The accelerator is a complicated piece of machinery, and it takes a cross-organizational effort of more than 500 people — engineers, scientists, technicians and others — to keep it performing. Those individuals are each committed to the team goal of delivering science that tackles difficult challenges, whether enhancing national security, understanding the origins of the universe or developing medicines that allow people to live longer and healthier. That work represents an abiding mission for the decades to come.