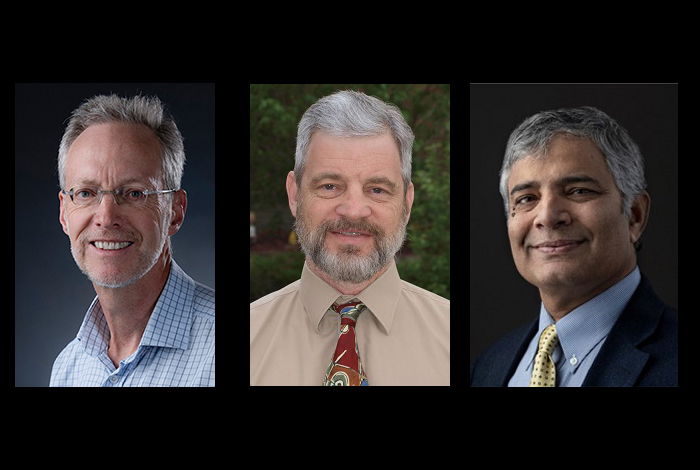 Mark B. Chadwick, left, Stuart A. Maloy, center, and D.V. Rao, right, were all honored by the American Nuclear Society

Los Alamos, N.M., May 27, 2021 – Two scientists at Los Alamos National Laboratory were named fellows of the American Nuclear Society (ANS) and a third was recognized with a special award. Mark B. Chadwick, chief scientist and chief operating officer of Weapons Physics, and Stuart A. Maloy, deputy group leader for Materials Science at Radiation and Dynamic Extremes, were named fellows, while D.V. Rao, program director for the Laboratory’s Civilian Nuclear Program, earned a special award for making advanced nuclear energy systems a reality.

“The meticulous work of D.V., Mark, and Stu as they deliver advances vital to our national security mission is inspiring,” said Laboratory Director Thom Mason. “The American Nuclear Society’s decisions to designate two Los Alamos National Laboratory employees as fellows and to give a special award to D.V. are evidence of this trio’s sizable contributions to nuclear security and clean energy.”

Chadwick was named an ANS Fellow for his renowned contributions to modeling of plutonium fission and his leadership in nuclear cross-section evaluations, which have led to improved simulation performance across the range of nuclear applications. His international leadership in nuclear science and technology, as well as his significant and continuing technical contributions to nuclear enterprise, were also recognized by the society. He was awarded DOE’s E.O. Lawrence Award in 2011 for his analysis of fission product yields and their energy dependencies, which resolved a longstanding discrepancy in nuclear yield assessments.

Chadwick leads the U.S. collaboration that oversees the development of Evaluated Neutron Data Files, which are cross sections widely used in neutronics transport simulations. He also is the lead author of two books: one published with the International Commission on Radiation Units and Measurements, defining standards for energy deposition in neutron and proton radiation cancer therapy, and the second with the International Atomic Energy Agency on photonuclear data for nonproliferation and radiation protection applications.  He has more than 300 publications, of which over 130 are refereed journal papers with over 13,000 citations. Chadwick is also a fellow of the American Physical Society and Los Alamos National Laboratory.

Maloy also was named an ANS Fellow in recognition of his outstanding accomplishments and leadership in radiation materials science and engineering, and his expertise in microstructural analysis and interpretation. Maloy’s expertise in microstructural analysis underpins the development of innovative materials needed for spallation neutron sources, advanced fission and fusion reactors, and other energy applications, ANS noted.

In his 32 years at the Laboratory, Maloy has applied his expertise to characterizing and testing the properties of metallic and ceramic materials in extreme environments such as under neutron and proton irradiation at reactor relevant temperatures. A registered professional engineer in metallurgy, Maloy has more than 200 peer-reviewed technical publications with more than 4,500 citations, H-index of 36, and numerous presentations. He has also served a professor with University of New Mexico’s nuclear engineering department.

Maloy was recognized in 2021 by the Laboratory for his sustained, high-quality postdoctoral mentoring that combined personal engagement and accessibility with the carefully honed transmission of in-depth scientific insights. This recognition noted that a significant number of his former postdocs now have leading positions in academia and national laboratories.

Rao is the co-lead of the DOE’s R&D program for microreactors, and national lead of Fission Power Systems for Space Exploration. In his 25 years working on safeguards of nuclear reactors and high-hazard facilities, he was named the 2019 Asian American Engineer of the Year and has earned two Performance Excellence Awards from the DOE/National Nuclear Security Administration, four Distinguished Performance Awards from Los Alamos, two certificates of High Appreciation from the U.S. Nuclear Regulatory Commission, and secured three U.S. patents. He has more than 30 publications in these fields.

Chadwick, Maloy, and Rao will be honored at the 2021 ANS Virtual Annual Meeting during the opening plenary on June 14.