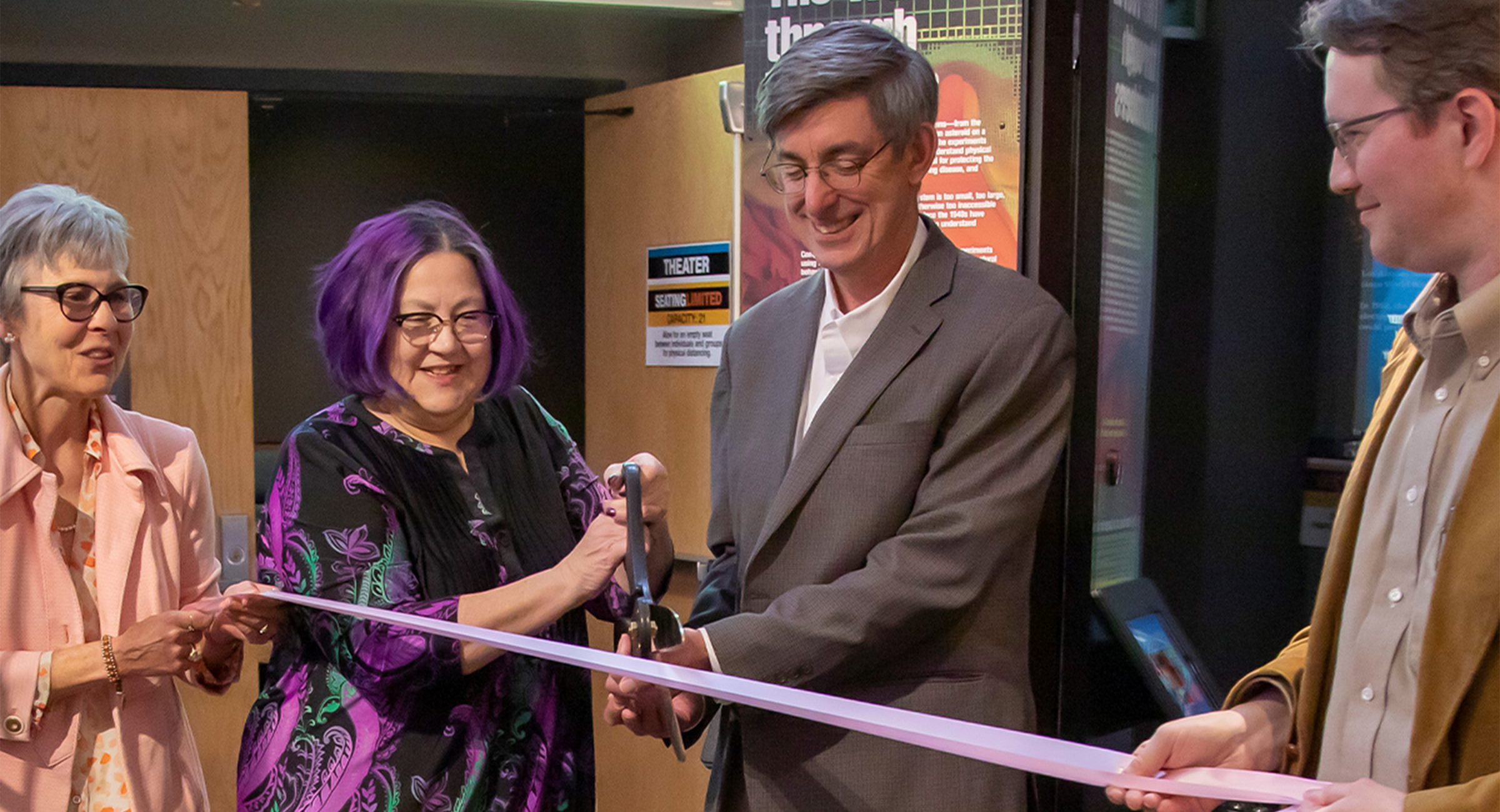 A diverse crowd of computing experts and enthusiasts gathered at the Bradbury Science Museum recently to celebrate the opening of a revamped supercomputing exhibit. Leadership, designers, historians and scientists from the Laboratory’s past and present ate cupcakes and talked petaflop clusters while exploring the exhibit’s newest features and stories.

The result of a partnership between the Bradbury and the Institute of Electrical and Electronics Engineers Foundation, the exhibit highlights supercomputing’s progress into the 21st century, its unique contributions to science, the role of sustainable engineering and the Laboratory’s legacy of women in computing.

Kicking off a jubilant reception in the museum’s Tech Lab, Museum Director Linda Deck welcomed the assembled exhibit partners and supporters. Deck introduced John Sarrao, deputy Laboratory director for Science, Technology and Engineering. In his remarks, Sarrao emphasized the increasing importance of advancing research and innovation for “climate, clean energy and sustainability,” and identifying “the role supercomputers play in this.”

With the summer arrival of the Laboratory’s newest supercomputer, Crossroads, generating excitement across scientific and engineering divisions, Sarrao remarked that the refresh arrives at a “remarkably good time.”

A key part of the exhibit is the enduring and growing impact of high-performance computing, which efficiently completes highly complex, long-running mathematical calculations. Visitors can explore how supercomputers’ efficiency in processing tremendous amounts of data can turbocharge prediction, control and understanding of scientific frontiers, from climate change to modeling diseases to origins of the universe.

The supercomputing exhibit features interviews with several computer scientists, some of whom were in attendance at the event, such as Heather Quinn, Diane Oyen and Ann Hayes, the Laboratory’s former executive director of its advanced computing laboratory.

“Collecting and telling untold stories is not just about the history; it is inspirational for the next generation,” Carolyn Connor told the group. Connor is the acting program manager for Institutional Computing, the chair of the Laboratory’s Women in Computing employee resource group, project lead on the High-Performance Computing History Project and a key collaborator on the Bradbury exhibit.

Echoing the significance of the Laboratory’s inclusive culture, Connor remarked on the “importance of voice, visibility and validation” in sharing the varied histories of “the work here at Los Alamos and its impact on computing, and the genesis of computing.”

Following the ceremonial ribbon cutting by Sarrao and IEEE’s project finance manager Terri Roberts, attendees explored the new exhibit. Many of them had a hand in its development, including Gabriella Smith, the designer of the exhibit’s vacuum tube avatar Tubie, a character who guides visitors through the exhibit.

A prime example of the Lab’s career pipeline with area schools and colleges, Smith created Tubie while an intern through the Cultural Technology Internship Program, a collaboration between the Laboratory and New Mexico Highlands University. Smith now works at the Laboratory in Communications and External Affairs.

National Security Research Center historian Nicholas Lewis also got to celebrate his contributions to the exhibit. Lewis was the subject matter expert and lead writer for the exhibit’s historical components. Lewis concluded the event with a talk, “Total Immersion in Computing.”