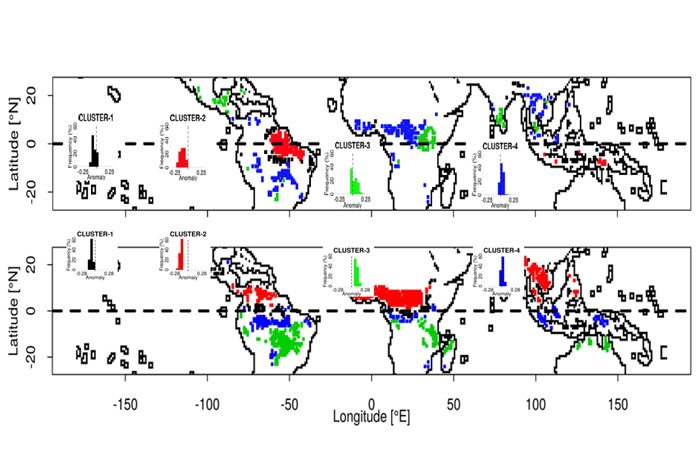 LOS ALAMOS, N.M., May 11, 2020—New research has found that El Niño events are often associated with droughts in some of the world’s more vulnerable tropical regions. Associated with warmer than average ocean temperatures in the eastern Pacific, El Niños can in turn influence global weather patterns and tropical precipitation, and these changes can lead to massive plant die-offs if other extreme factors are also at play.

“We know a lot about El Niño in terms of its impact on weather and surface water resources,” said Kurt Solander, a research hydrologist in the Computational Earth Science group at Los Alamos National Laboratory and lead author of the paper. “This new study drills down to reveal how El Niño can affect the moisture content of soil, which controls the growth of plants, the food we eat, and how much water from land gets fed back into the atmosphere through evaporation.”

In the paper, Solander and Los Alamos colleagues Brent Newman and Chonggang Xu analyzed changes in soil moisture content in the humid tropics after three “Super El Niño” events from the past—1982-83, 1997-98, and 2015-16. They found that during these years the most severe and consistent decreases in soil moisture occurred in regions like the Amazon basin and maritime Southeast Asia, with some of the changes potentially being significant enough to become a factor responsible for large-scale plant die off. In contrast, some other tropical areas, such as tropical East Africa, will likely see an increase in soil moisture during major El Niño events.

The team used a global dataset based on computer models and historic satellite observations of near-surface soil moisture. By extracting data from the rooting zone from the humid tropics, predicted soil moisture changes during the super El Niños could be examined at local scales. The team combined these data with on-site measurements, collected across the tropics, to verify the accuracy of the satellite and computer models. They were then able to identify ways to improve the estimates of soil moisture changes during El Niño events, and showed that El Niño induced responses varied from significant increases or decreases to minimal change relative to what occurs during non-El Niño years and spatial location.

Super El Niño events typically happen every 15 to 20 years, with mild to moderate events coming every three to five years. The most immediate impact of this new information is that it can help governments or farmers in these areas prepare for the consequences of decreased soil moisture, or understand that crops will need more water during these events.

“Scientists can predict these events with a moderate degree of confidence three to six months in advance,” Solander said. “With this new information, water managers in these areas can, for example, regulate how much water they retain in a reservoir to compensate for the expected decreases in available moisture for local agricultural crops.”

The work is part of ongoing research at Los Alamos studying spatial patterns of precipitation recycling, which effectively determines how much moisture plants return to the atmosphere. In plant-dense regions like the Amazon basin, researchers at Los Alamos hope to provide insight on atmospheric moisture feedbacks from vegetation as plants adjust to climatic warming, which in turn helps researchers understand how precipitation will change on a global scale.

The paper, “The pan-tropical response of soil moisture to El Niño,” was published in Hydrology and Earth System Sciences. [doi:10.5194/hess-24-2303-2020] The research was funded by the Next Generation Ecosystem Experiments-Tropics, supported by the United States Department of Energy, Office of Science, and the Office of Biological and Environmental Research through the Terrestrial Ecosystem Science Program.