At last, potential corrections are not larger than uncertainties 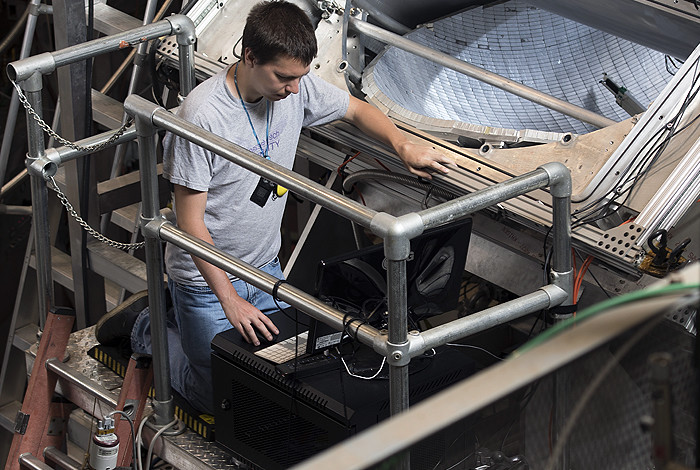 Being repulsive can have its advantages. In the case of an experiment at Los Alamos National Laboratory’s linear accelerator, a repulsive magnetic field and a clever detector system are allowing ultracold neutrons to be levitated so their actual lifetimes can be more accurately measured. For the first time, the measurements are considered accurate enough that potential corrections are not larger than the uncertainties.

“Neutrons, when safely at home inside an atom, are not at risk for blinking out of existence. But on their own, their average lifespan is about 15 minutes,” said Los Alamos physicist Steven Clayton, one of the authors of a new paper out today in the journal Science. “This matters in the larger science context because the average lifespan depends on fundamental parameters in the Standard Model of particle physics.”

A number of methods of containing the particles and measuring their lifespan have been tried over many years—oiled copper bottles, beams of neutrons surrounded by traps, all sorts of clever ways of determining exactly how long before the neutron decays into a proton. But there were always gaps in the timing from each method, which gave scientists doubts about both the Standard Model physics at play and the variations shown in the measurement methods.

Now, by levitating polarized, ultracold neutrons above the surface of an asymmetric storage trap, they have been able to prevent the trapped neutrons from interacting with the trap walls, measure the neutrons with increased accuracy, and determine their lifespan without needing such large room for error.

Using an 800 MeV proton beam at the Los Alamos Neutron Science Center (LANSCE) to liberate the bound neutrons and then injecting them into a magnetic trap (closed with fields on the bottom and sides and by gravity on the top,) the team was able to capture a population of neutrons and hold them in place for up to an hour, until a detector was lowered into place. Neutrons whose kinetic energy was too great for the experiment were diverted out of the trap, and the neutrons that had not yet decayed struck the detector paddle’s boron layer, where they were reabsorbed into matter and thus detected. Comparing the number of survivors after different storage times yielded the average neutron lifetime.