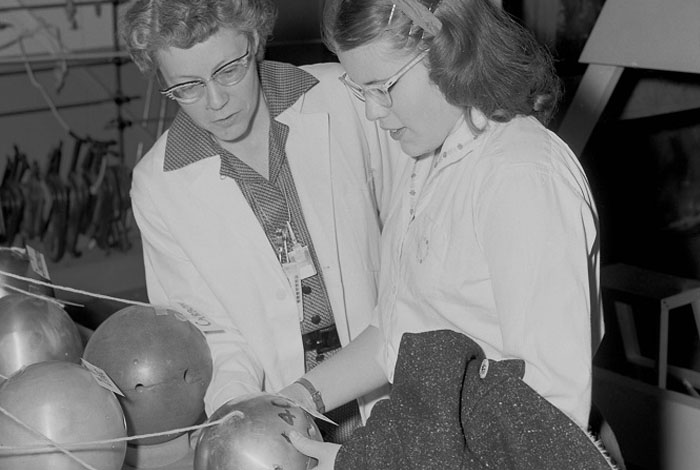 Elizabeth “Diz” Graves and her daughter, Marilyn, in 1959. Marilyn was nicknamed “Trinity” because Elizabeth, a physicist, was seven months pregnant when she witnessed the detonation of the Trinity test.

For Elizabeth “Diz” Graves, the summer months of 1945 were a symbolic intersection of her personal and professional lives.

As a physicist with the then-secret lab in Los Alamos, Elizabeth participated in the Trinity test — the successful detonation of the world’s first nuclear weapon, which took place in the remote New Mexico desert on July 16, 1945.

Her role was to observe the explosion that advanced science into the Atomic Age, according to records in the National Security Research Center (NSRC) — the Lab’s classified library, which also houses unclassified legacy materials.

And, Elizabeth was seven months pregnant.

In a cabin approximately 35 miles east of the Trinity test site, the first-time-mother-to-be worked alongside her husband and fellow physicist, Alvin Graves. They listened to scientist Sam Allison on the radio: “Three, two, one ….,” saw the unmistakable success of the Gadget, and then monitored the fallout with survey meters.

Not long after, Graves gave birth to Marilyn, though the baby girl was nicknamed “Trinity.”

Starting a career and a family

Elizabeth earned her doctorate in physics in 1940 from the University of Chicago, where she met and married Alvin. He was recruited to work for the Manhattan Project — the U.S. government’s effort to create the atomic bombs and help end World War II — but Alvin would not accept the job unless Elizabeth was also offered a position, according to the book Their Day in the Sun: Women of the Manhattan Project.

“She’s a better physicist than I am,” Alvin later said, according to his obituary in The New York Times.

Elizabeth was known to be smart, funny, a hard worker and maternal, even before the couple were parents to their three children. During WWII, Elizabeth opened her home to military members stationed at Los Alamos as temporary living quarters until dormitories were built.

“She was most outstanding in that she managed to combine successfully a career in physics and raising a family,” a friend said in a 1972 article in the Los Alamos Monitor.

The Graves would stay at the Lab for their entire careers, with Elizabeth eventually becoming a Group Leader in experimental physics and Alvin ultimately leading the Field Testing Division for 17 years.

“Diz was a ray of sunshine,” said John Hopkins, who worked at the Lab as a nuclear physicist for 34 years and was the associate director responsible for the nuclear weapons program upon his retirement.

Hopkins remembers when Alvin preceded Elizabeth in death in 1965, she found solace in her work.

“Diz threw herself completely into research,” Hopkins said. “When I commented about her long hours and dedication, she responded that when there was nothing at home she might as well go to the Lab.”

Elizabeth died from cancer on January 6, 1972, in an Albuquerque hospital. She was 55.

After her death, her colleagues shared memories of Elizabeth, including from one of her pregnancies: She went into labor while conducting important experiments in her laboratory, according to the Atomic Heritage Foundation. Elizabeth was able to complete her work while also monitoring her contractions with a stopwatch.