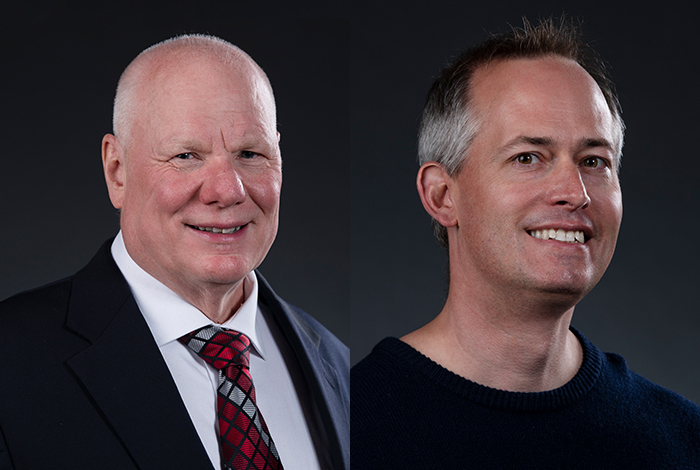 James Wendelberger (left) and Earl Lawrence have been named Fellows by the American Statistical Association.

“I am pleased to see Earl and James recognized by the American Statistical Association and I congratulate both of them,” said Irene Qualters, associate Laboratory director for Simulation and Computation. “Less than one percent of ASA members are elected as Fellows, and this honor reflects their contributions to the field of statistical science. Peer recognition is an important aspect of science and no one is more deserving than Earl and James.”

Lawrence was selected “for innovative methodological development, promotion of statistical methods in high consequence challenges in science and national security, outstanding service to the statistical profession, and mentorship of the next generation of statistician.”

Wendelberger was selected “for sustained impact to statistical applications in business, industry, and government, dissemination of statistical knowledge to diverse audiences, and service to the American Statistical Association as a leader of multiple sections and chapters.”

The newly elected Fellows will be recognized at the Joint Statistical Meetings in Seattle in August.

Earl Lawrence works on data analysis problems of all types, especially problems that build statistical models around simulations performed on massive supercomputers. This work involves fitting statistical spatiotemporal models to the output of suites of simulations and then comparing those models to physical data in order to estimate the uncertainty in the simulation inputs and outputs.

Lawrence completed his Ph.D. in statistics at the University of Michigan in 2005. He has been a member of the Statistical Sciences group at Los Alamos ever since. During that time, he has worked with collaborators in fields including cosmology, nuclear theory, space weather, materials science, infrastructure networks, Martian geology, and nuclear weapons. In 2020, he became the group leader of Statistical Sciences.

James Wendelberger joined the Laboratory in 2013 as a scientist in the Nuclear Material Accountability and Control group, where he contributed to the accounting of nuclear material. In 2016, he joined the Statistical Sciences group, where works on a broad set of interdisciplinary investigations, including sampling of underground waste tanks, plutonium batteries for space applications, and reprocessing of nuclear materials into pellets that can be stored safely.

About the ASA Fellows

The designation of ASA Fellow has been a significant honor for nearly 100 years. Under ASA bylaws, the Committee on Fellows can elect up to one-third of one percent of the total association membership as Fellows each year.

Read more about the here.