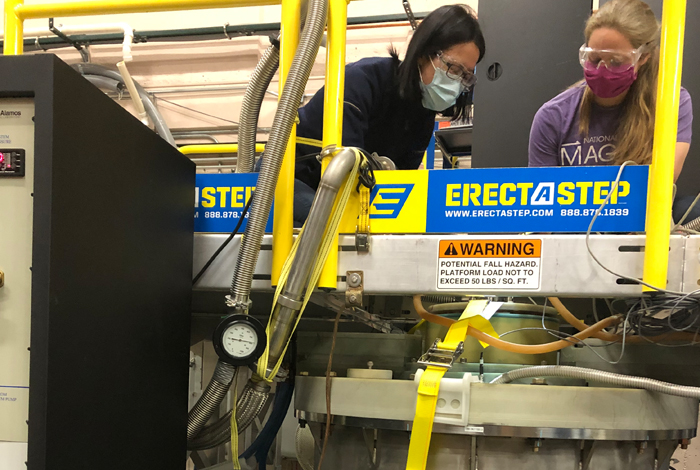 You Lai (left) and Johanna Palmstrom (right) use the new duplex magnet at the Los Alamos MagLab Pulsed Field Facility. The same magnet was recently used for the first time in a series of experiments on the exotic Kondo insulator YbB12.

LOS ALAMOS, N.M., April 19, 2021—A recent series of experiments at the National High Magnetic Field Laboratory (National MagLab) at Los Alamos National Laboratory leveraged some of the nation’s highest-powered nondestructive magnets to reveal an exotic new phase of matter at high magnetic fields. The experiments studied the unusual Kondo insulator ytterbium dodecaboride (or YbB12) and were the first results from the new 75-tesla duplex magnet housed at the National MagLab’s Pulsed Field Facility at Los Alamos.

“This magnet and the resulting experiments are the first fruits of the National Science Foundation-supported pulsed magnet surge,” said Michael Rabin, director of the Pulsed Field Facility at Los Alamos. “The surge is creating new science capabilities in the 75-85 tesla range — leading eventually to an expanded portfolio of some of the most powerful nondestructive magnetic fields in the world.”

Researchers from the University of Michigan, Kyoto University and Los Alamos conducted the research, published last week in Nature Physics.

In Kondo insulators, there is an unusual quantum-mechanical mixing of mobile electrons and magnetic atoms, making these materials attractive as model systems for basic science, electronic devices, and possibly quantum computing. Unlike simple metals and insulators, YbB12 exhibits properties of both — its electrical resistance behaves like that of an insulator, but it also clearly shows quantum oscillations at high magnetic fields that are a fundamental metallic property.

“A plethora of theories has emerged to account for such behavior,” said John Singleton, a fellow at the MagLab’s Los Alamos campus and co-author on the paper. “Some physicists believe this is a condensed-matter incarnation of neutral Majorana fermions, entities normally explored in particle physics.”

To test these theories, the research team wanted to observe how the neutral fermions that they found in YbB12 responded to extreme conditions. The high magnetic fields in the new 75-tesla duplex magnet available at the National MagLab’s Pulsed Field Facility were used to suppress the insulating properties of YbB12 and measure quantum oscillations and various properties that are affected by the presence of the neutral fermions.

“The extra 10 tesla above our standard pulsed magnets provided by the duplex magnet enabled this new state of matter — exotic fermions gradually being drowned in a sea of normal electrons — to be tracked across a wide range of magnetic fields for the first time,” said Singleton. This confirmed that the phenomena observed were definitely associated with the neutral fermions and provided a test of the various theoretical models.

The duplex magnet is a result of a Pulsed Field Facility “magnet surge” supported by the National Science Foundation. The purpose of the surge is to create new and expanded science capabilities in the 75-85 tesla range. The duplex magnet system is available to researchers from around the world to conduct their own experiments, and an 85-tesla duplex magnet and necessary supporting technology are under development.

These new pulsed magnets are powered solely by capacitor banks without relying on the Los Alamos generator that powers the much larger 100 tesla magnet. The generator is currently offline for repairs and maintenance, so magnets from the surge fill an important gap for condensed-matter physics in high magnetic fields.

The new magnets are called duplex magnets because they are made from two concentric electromagnet coils (solenoids) that are powered independently from separate capacitor-bank modules. When the generator is back online, technology developed by the pulsed magnet surge will be combined with Los Alamos’ largest magnets to further expand the MagLab’s science capabilities.

The National MagLab is the world’s largest and highest-powered magnet facility with sites at Florida State University, the University of Florida and Los Alamos National Laboratory. Los Alamos National Lab hosts the Pulsed Field Facility, home to a 100-tesla magnet system that has held a world record for nondestructive magnetic field production since 2012. The MagLab is funded by the National Science Foundation (DMR-1644779), the State of Florida and the US Department of Energy. High magnetic field magnets are essential to understanding physics phenomena that range from high-temperature superconductivity to quantum matter.